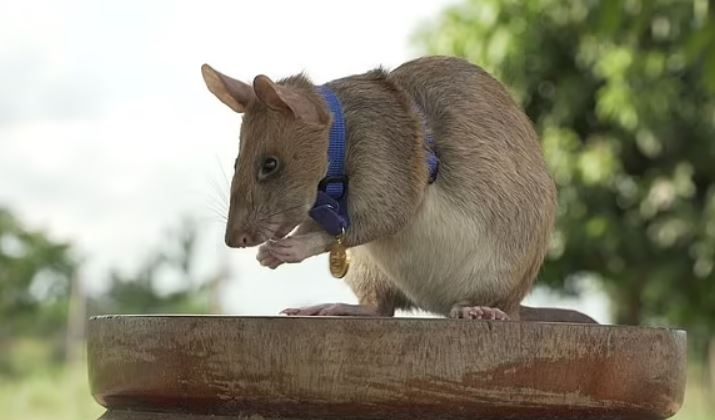 He won a gold medal for bravery and his retirement last year made international headlines.

Not bad for a rodent.

Tuesday brought the sad news that Magawa the munitions-sniffing rat has died.

Magawa was a giant African pouched rat trained to detect explosives by scent — a key player in the prevention of landmine deaths in Cambodia.

Trained by the Belgium-based charity APOPO (Anti-Personnel Landmines Detection Product Development) in his native Tanzania, Magawa discovered 71 landmines and another 28 live munitions in Cambodia over his lifetime, according to the Daily Mail .

That represents 14 hectares cleared over a five-year career.

In Cambodia, 64,000 have died and more than 25,000 have lost limbs because of the landmines placed during the ousting of the Khmer Rouge in the late ’70s, and for two decades after.

According to his trainer, Magawa retired last year as his energy began to wane a bit, but he remained energetic and ate well up until a few days before his death.

A statement from the non-profit said: “All of us at APOPO are feeling the loss of Magawa and we are grateful for the incredible work he’s done.

“During his career, Magawa found over 100 landmines and other explosives, making him APOPO’s most successful HeroRat to date.

“His contribution allows communities in Cambodia to live, work and play without fear of losing life or limb.”

The rat, who appears in pictures to be about the size of a large squirrel — they average about 1.5 kg but can get to 4 kg — received a miniature People’s Dispensary for Sick Animals gold medal in 2020.

This animal bravery award is the highest non-combat honour given. He is the first animal in the non-profit’s history to get the PDSA gold medal.

Nearly 300 rats are a part of the APOPO animal team. They can sniff out explosives 96 times faster than any other conventional solution such as a metal detector; some of the rats are trained to sniff out tuberculosis in spit samples and have raised detection rates of partner clinics by 40%.

Meanwhile, the Daily Mail quotes PDSA director general Jan McLoughlin as saying, “The work of Magawa and APOPO is truly unique and outstanding.”

“Magawa’s work directly saves and changes the lives of men, women and children who are impacted by these landmines,” McLoughlin said. “Every discovery he makes reduces the risk of injury or death for local people.”

McLoughlin added that the PDSA animal awards program aims to raise the status of animals in society to better honour “the incredible contribution they make to our lives.”

All 3 main party leaders will campaign in Ontario on Tuesday