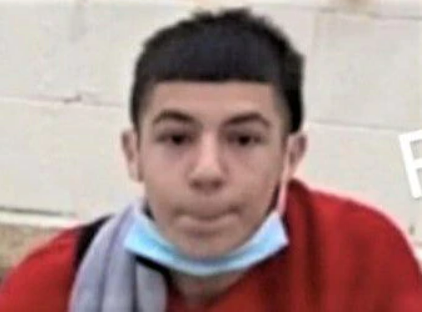 The boy’s dad is charged with being the getaway driver

Police in the Dallas area are on the hunt for a 14-year-old boy wanted in a triple killing at a gas station on Sunday.

Abel Elias Acosta is armed and dangerous, Garland Police say. A juvenile court authorized the release of the boy’s name.

His father, Richard Acosta, 33, surrendered to cops on Monday. He is accused of being his son’s getaway driver and is charged with capital murder.

The shooting, captured on surveillance video, shows a shirtless male with a handgun approaching the gas station convenience store.

He opens the door and then shoots more than 20 rounds.

Xavier Gonazalez, 14, Ivan Noyala, 16, and Rafael Garcia, 17, were killed and a 15-year-old who was a cook at the store was injured but is expected to survive.

Police say the shooting was a retaliatory attack over a prior dispute.

Cops released a photo Wednesday from social media of a boy holding a gun who they said is Acosta.

On Monday, a 14-year-old boy was arrested as a suspect in the shooting and then released to his family, police said That teenager, who police have not identified by name, is not the shooter but is a “person of interest.”