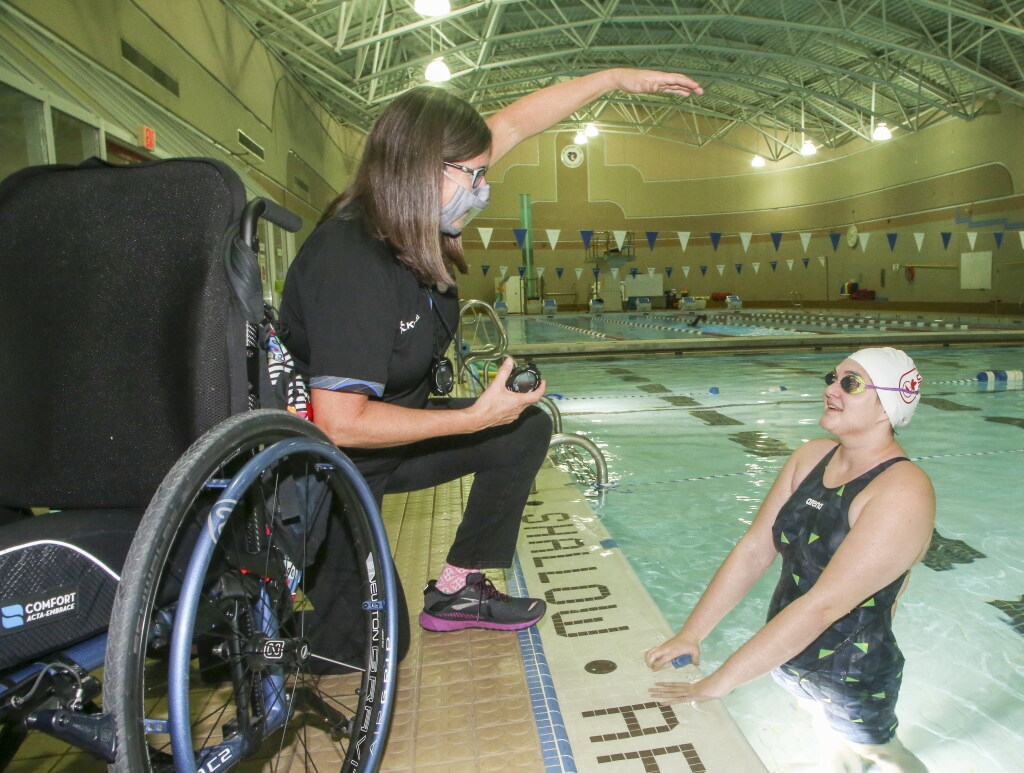 In her storied career, she swam all five Great Lakes, including a double crossing of Lake Ontario, the English Channel, Juan de Fuca Strait, Catalina Channel and Sydney Harbour.

I hear she even gazed at the Pacific Ocean with a glint in her eye.

“She asked me to kill her,” says her mom, Sara Stevens. “It was incredibly heartbreaking. She was so lost and tiny.”

The world seemed stacked against Ruby. An array of conditions beset her, including autism, dystonia and cerebral palsy. There were voices in her head and at one point, she was in hospital, sedated.

“Truthfully, I don’t remember a lot about that time, when I was young and struggling,” says Ruby. “But I do remember that all I wanted to do was go swimming.”

Now, Ruby is 19 and powerful and has her sights set on Paralympic glory in the pool.

Vicki Keith is her new coach at Variety Village.

I meet them, and Sara Stevens, at the Village Sunshine Pool. Keith — and the Sun — helped get that pool built in the 1980s. Countless kids with disabilities have splashed its laps, some becoming great champions.

Ruby started in synchronized swimming at the Village, won an armful of medals, then switched to speed events with Variety’s iconic Flames team.

She hoisted tons of weights and sped around a track on a hand-bike. In a friend’s backyard pool, she tethered herself with a bungee cord and swam in place for an hour and a half. She did this until after Thanksgiving, with her mother bundled up by an outdoor fireplace.

Keith says, “Ruby’s fierce, she’s powerful physically and mentally. It’s what I look for in an athlete. Competitive nature. Willingness to push and to learn.

“COVID has been challenging for many athletes. The dedicated ones are still training, even without competition.”

Meets in Saskatoon and Charlotte, North Carolina, have helped revive that competitive spirit in the past two months, though Ruby is waiting for her para swimming rating, based on level of disability, a bit like a golfer’s handicap.

Watching her swim will give you shivers. Dystonia freezes her hips, so she can’t kick, and she hauls herself through the water with arms only, and even then her left arm won’t fully rotate.

Try it some time. You will probably drown.

On dry land, Ruby uses a walker, or a wheelchair for long distances and after swimming, when her legs don’t work much at all.

But water is her element. In that dark time a decade ago, she would sink into the pool’s embrace to mute those voices in her head.

“The water has a silky feeling that is very therapeutic,” she says.

“I know exactly what Ruby is talking about,” says her new coach. “You hit the water and there’s a complete calm and the sound and the light soften. I love the silence.”

Keith specializes in coaching swimmers with disabilities. She helmed the Flames 30 years ago, then left to form her own team in Kingston. Her husband, John Munro, who also swam Lakes Ontario and Erie, died a year ago, just a few months after being stricken with dementia.

So, Keith has reset her own life by returning to the Village.

She sees much of herself in Ruby Stevens.

Says Keith: “Ruby is a strong, powerful woman who knows what she wants and is doing everything she can to get there.”

“My ultimate goal,” says Ruby, “is to make it to the Paralympics and to set a world record.”

“She’s on the right track,” says her new coach.

Speaking of records, we’ve shattered one. The 2021 Sun Christmas Fund for Variety Village has already reached $98,468, burying the old total mark of $75,508 set last year. You can help push us to $100 grand and beyond by donating at www.sunchristmasfund.ca . There, or at www.mikestrobel.ca , you can also order my new book, Small Miracles: The Inspiring Kids of Variety Village . All sales go to the fund for that iconic Scarborough sports centre geared to kids with disabilities.