WARMINGTON: Etobicoke sisters reunited with their stolen dog Bugsy just in for Christmas 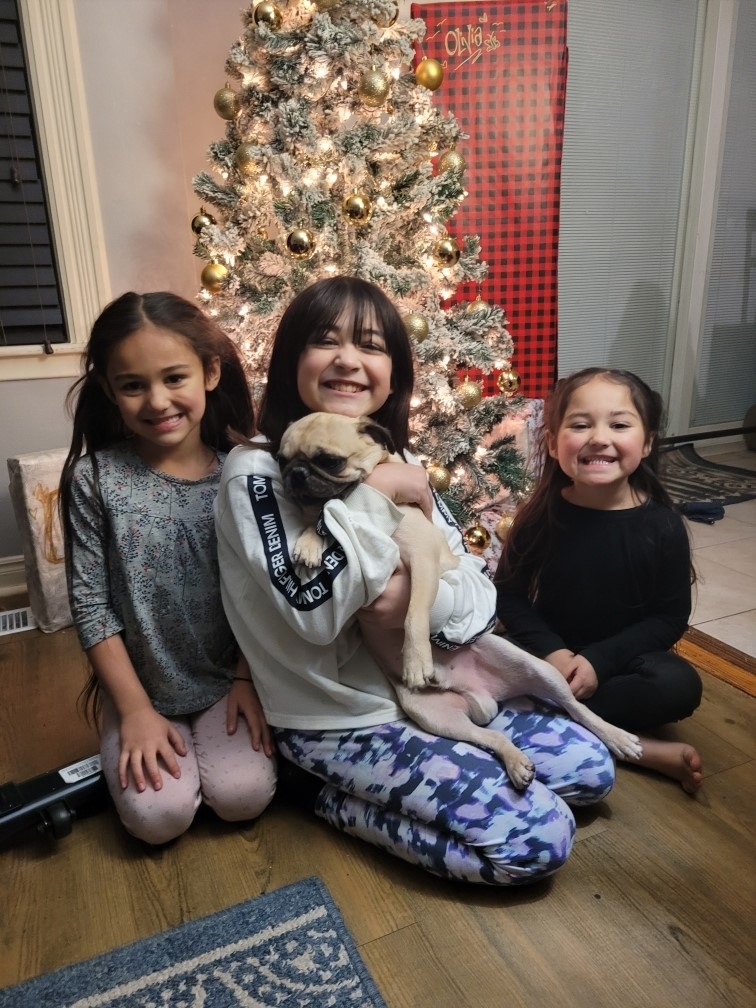 All these Etobicoke sisters wanted for Christmas was for their pug Bugsy to return home.

This holiday miracle saw Santa drop off the greatest Christmas present three sisters could ever hope for. But it wasn’t just Maiah, 11; Sophia, 6; and Naomi, 4, who were excited.

Members of Toronto Police 23 Division were also pretty emotional about the stolen four-year-old pug being returned to his family on Thursday.

“He was so happy to be reunited with his family,” said Det. Nicole McEachran. “There were tears in the eyes of the most seasoned officers when Bugsy was dropped off at the station.”

You could see the joy on Const. Matt Campbell’s face, even through his medical mask, as he comforted the tiny hound while waiting for his family to come and get him. It had been a long six days since the lovable Bugsy disappeared from his family’s backyard on Henley Cres. — near Kipling Ave. and Albion Rd. — in what police suspect was a dognapping.

“We knew something was wrong when he didn’t scratch to come in,” said the girls’ mom Brittany Abrego. “Someone had removed the latch and lock on the gate and took him.”

Later the family noticed an advertisement on a social media buying-and-selling site offering to “re-home” the dog for $550.

“I knew right away it was our dog,” Brittany said. “That was Bugsy, no question about it.”

The person who was running the ad didn’t respond to their request and quickly took down the posting. The next day, Bugsy’s picture appeared on the front page of the Toronto Sun .

“They got scared,” a police source said of the dog thieves. “They knew they would not be able to sell Bugsy now.”

Police say Bugsy was found around 5 p.m. on Thursday in the area of Westhumber Blvd. and Delsing Dr. — a few blocks southwest of where he disappeared from his family’s backyard.

Exactly what happened remains under investigation, but police say two people showed up at 23 Division with Bugsy and a story of finding him in another part of Toronto.

Cops are calling the pair “Good Samaritans” who saw the Toronto Sun coverage and knew those kids needed Bugsy home before Christmas.

That special delivery, and all of the help from McEachran and Campbell, as well as Consts. Laura Brabant and Jenniferjit Sidhu, saved Christmas for this family who couldn’t bare the thought of celebrating Dec. 25 with a loved one missing.

This Christmas miracle was delivered on the night before Santa is set to arrive, and three girls couldn’t be happier with the best early present ever!