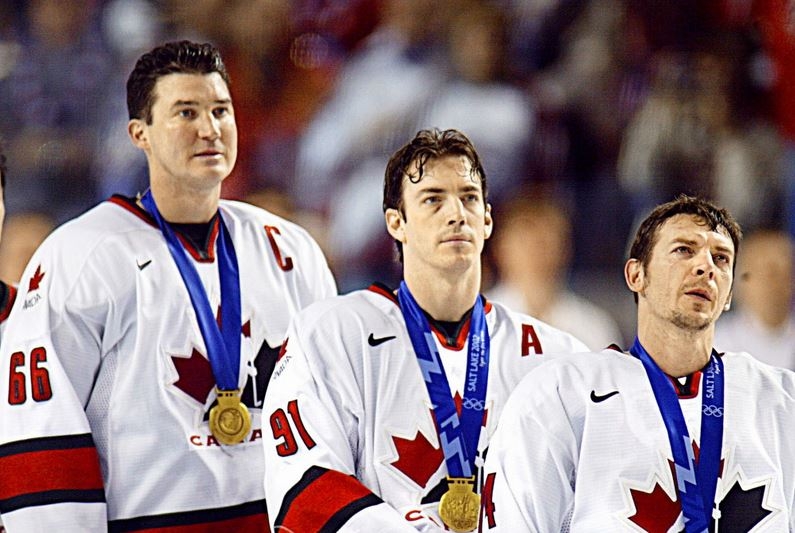 Having that Olympic gold medal placed around his neck is something hockey legend Theoren Fleury will never forget.

“It’s the ultimate thrill of your life, but the Olympic gold medal or Stanley Cup ring are not what you cherish most about those experiences,” said the Calgary Flames icon who played for Canada twice in the Olympics. “What stays is the process and journey with a group of guys like Mario Lemieux, Joe Sakic, or Mark Messier.”

So when he got word Tuesday that the NHL and NHLPA decided to not go to the Winter Games in Beijing, he immediately thought of today’s players.

“I think Connor McDavid not getting to live his Olympic dream,” said Fleury, who scored 489 NHL regular season and playoff goals and 1,167 points over 1,165 games. “If you cheer for the Edmonton Oilers, you want him to go to the Olympics because that’s where you become an even better player.”

In 1998, while playing in the Winter Olympics in Nagano, Japan, Fleury spent a lot of time watching Wayne Gretzky in action, and at the 2002 games in Salt Lake City, Utah, he shared the ice with Lemieux.

“These guys are amazing leaders who show you how to win,” said the iconic Fleury. “Winning is hard.”

No. 14 was a champion on world junior, World Cup, Olympic, and Stanley Cup teams.

“There’s no greater feeling than putting on your country’s jersey,” added Fleury. “I feel bad for today’s players, like Mitch Marner, who may never get that chance.”

Fleury, who really should be in the Hockey Hall of Fame, sees today’s players missing out.

“I would love to see Auston Matthews and Johnny Gaudreau play for the United States or Alex Ovechkin or Sidney Crosby play in their last Olympics,” he said. “Especially in a pandemic when we are stuck in our houses.”

Having said that, he is not critical of the league or players for the decision.

“It’s a $5-billion business,” he said. “There’s a lot of uncertainty right now.”

While he shares the view of many, including NBA Commissioner Adam Silver, that we’re going to have to learn to live with COVID-19 going forward, Fleury also sees the perspective of the players.

“No one wants to test positive at the end of the Olympics and have to stay in China away from their teams and families for three weeks alone,” he said. “This is a complicated matter.”

On day where the Olympic dream died for NHL hockey players I had pleasure of speaking with iconic @TheoFleury14 for my latest column in Sun papers reminiscing about the 2002 gold medal win at Salt Lake City. I took this as Canada celebrated and you can see #14 right there in mix pic.twitter.com/NcG684conX

While most commenting on social media saluted the NHL for pulling its players from the Olympics because of fears surrounding the Omicron variant, many also cited human rights issues and bitterness over the holding of the two Michaels for three years as additional reasons to justify the move.

“This was the right call and for more than COVID,” tweeted Ann Roll.

“Right call for safety, but not due to the virus,” tweeted Shannon B. “I don’t trust Beijing not to do another snatch and grab if someone says something out of line.”

Politics and the pandemic aside, there are Canadians like Fleury who were just looking forward to seeing the best hockey players compete.

“As a fan, I am disappointed for sure,” said Fleury, who now works as a life coach. “But I am glad we still have the world juniors to enjoy.”

WARMINGTON: Afghans stranded by Canada cling to hope heading into 2022