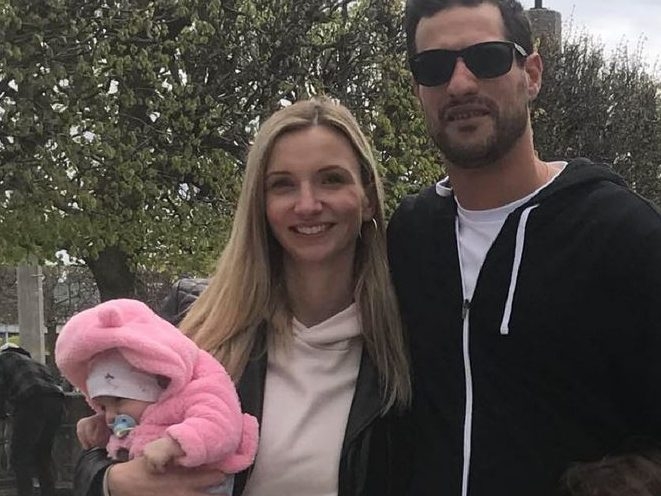 And who can blame him? On June 18, 2020, just days before Father’s Day, his entire world was wiped out in the blink of a selfish eye — his wife, Karolina 36, and daughters Klara, 6, Lilianna, 3, and Mila, 1, were killed by a dangerous driver with drugs in his system who was speeding at almost twice the legal limit when he blew through a red light.

It was heartbreaking to watch the broken Caledon man stand before Justice Sandra Caponecchia and beg for justice in sentencing Brady Robertson, the 21-year-old who has pleaded guilty to four counts of dangerous driving causing death but who is challenging the drug impairment law.

Ciasullo’s friend read the words he didn’t have the strength to read himself. And as his raw pain was revealed for all to see, you couldn’t help but add your tears to his.

“I think every day about seeing their lifeless bodies for the first time at the funeral home and falling on my knees, screaming and crying for someone to please tell me this is just a nightmare,” he wrote in his victim impact statement. “They were my entire life.”

The widower said he could tell the judge about how Karolina was the love of his life, how she made him a better man and was the glue of their family. About how his daughters were his everything — how he’d come home dirty from construction, and they’d run to him and snuggle and talk about their day. How Klara would want to know about all the tools he used, Lily would jump into his arms and only his magic touch could get Mila to sleep within minutes.

He could tell her how he’d let them paint his nails and even shave his head, of how they’d all go for ice cream and bike rides. “But those are just words,” Ciasullo said.

When Robertson slammed into his family’s SUV, sending it crashing into a hydro pole at about 12:15 p.m. on a sunny, dry day, he claimed five victims, not four

“How did you have the right to take their lives and mine?” Ciasullo demanded.

“I wish I was there in that car every day and I wouldn’t have to feel this pain,” he said. “The weight of the night is heavy. I have nightmares and panic attacks, and I sometimes pray that I will be lucky enough not to wake up.”

Everything reminds him of them. Nothing brings comfort or happiness. “I ask myself every day what the point of living is. My entire being has been stolen from me. I’m not the same person anymore, and I’m not the same son, brother, uncle, or friend. I don’t know who I am anymore without them.”

In his agony, his only purpose now is to make his girls proud. “I will fight for justice for them, even though the only justice that I can have right now is them walking through these doors and standing beside me.

“Please judge, how am I supposed to go through life knowing I will never hold, kiss, or talk to my four beautiful girls again? My entire family is gone forever. Do not let my family’s death, my babies’ death, be in vain.

“He needs to pay for what he did to me and everyone he took a piece of that day.”

A sentencing hearing is scheduled for next year.

TTC aims to rebound from pandemic in next 2-3 years