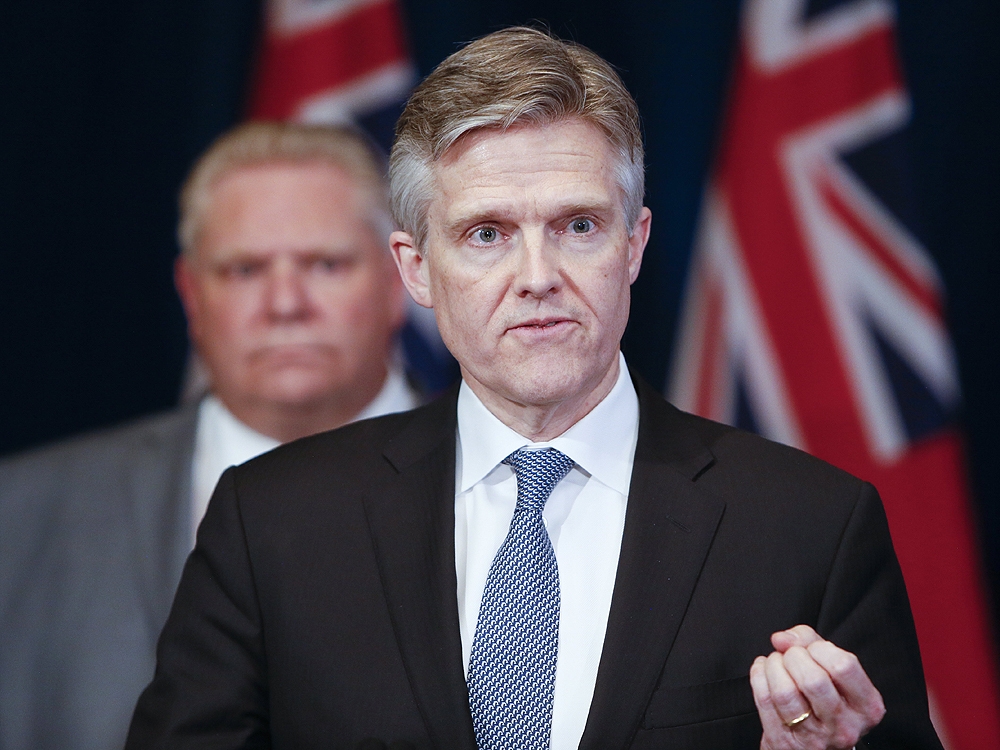 The decision by Rod Phillips to announce he was resigning as a cabinet minister and MPP had all the hallmarks for the Friday news dump.

Except it wasn’t the government trying to quietly release some bad news they want the public to miss, it was bad news being delivered to the government.

Phillips’ departure appears to have surprised everyone at Queen’s Park, from the premier’s office to his own staff to the media.

“I have always considered public service a privilege and it has been an honour to serve as the MPP for Ajax and in three cabinet portfolios. That said, my professional life has been spent in the business world and I look forward to returning to the private sector,” Phillips said.

Before running for office, Phillips had served in high-profile positions with firms such as KPMG and law firm Goodmans. He was president and CEO of Shepell-FGI and chairman of the board for Postmedia, the owner of this newspaper. He had stints in the public sector as chief of staff to former Toronto mayor Mel Lastman and president and CEO of the Ontario Lottery and Gaming Corporation.

There was no announcement of a new job waiting in the wings for Phillips, no cushy appointment. At this point, he appears to simply be leaving.

Several friends and associates contacted for comments either declined comment or said they were surprised by his departure but offered no other comment.

Phillips said his statement would stand when contacted for an interview.

“The experience of public life is best understood by those who have served and their families,” Phillips said in his statement, which went on to praise the work done by all members of the legislature.

After being elected as part of the Ford PC wave that swept across Ontario, Phillips was first appointed as environment minister, a position he held for about a year before being promoted to finance minister in June 2019. His decision to take a secret vacation to St. Barts in December 2020 while the province was under a strict lockdown cost him his cabinet post and much embarrassment.

Ford reinstated Phillips to cabinet in June 2021 by naming him the minister for long-term care.

“I want to thank Rod Phillips for his tireless work representing the people of Ajax and advancing important and necessary improvements in Ontario’s long-term-care system,” Ford said in a statement. “I have no doubt there are great things for Rod ahead.”

There will undoubtedly be great things ahead for Phillips. He’s the type of experienced and competent executive that anyone would want around the cabinet table or the boardroom table. His departure is a loss for the government.

Much of the chatter about his departure has focused on the difficulty the PCs may have in winning Ajax in the upcoming election. Phillips took 39% of the vote in the 2018 election beating his NDP challenger by 8 points.

The bank account of the local riding association is said to be flush with cash due to extensive fundraising by Phillips and a campaign manager was hired in December, another sign this decision is recent.

The loss of Phillips is significant for Ford and the opposition is calling it a sign the government is in disarray. This may be simply be what it appears, a case of someone deciding the pressures of elected life are not for them and their family.

If it proves to be anything else, including the start of more departures, Ford and his PCs are truly in trouble.

TEARS OF BLUE: Toronto cops who made ultimate sacrifice