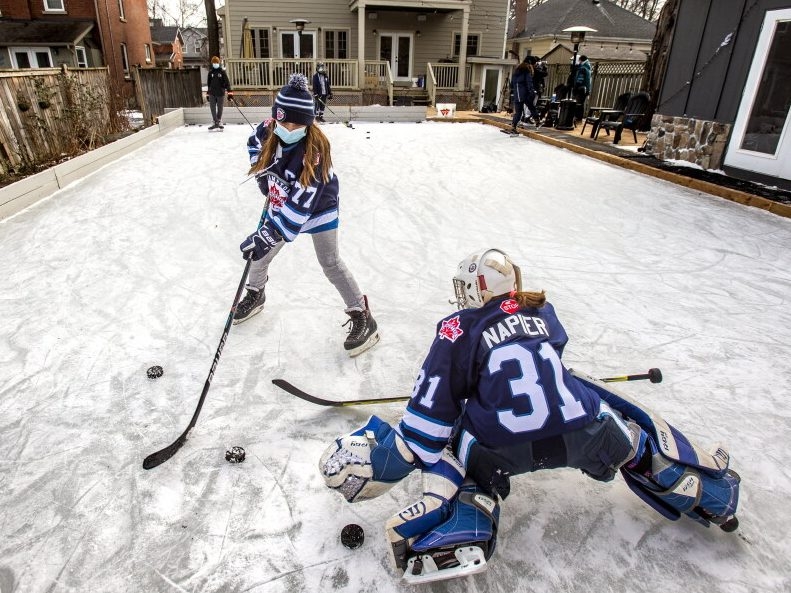 The City of Brampton is offering a chance to play a game of shinny hockey with legendary Leaf captains while encouraging some exercise and positive vibes at a time when both are in short supply during this never-ending pandemic.

“We build a rink every year but with this competition we definitely want to enhance what we usually do so we can have a chance to have Wendel and Dougie skate in our backyard,” downtown Brampton resident and hockey coach Jeff Luddington said Saturday.

The winner of the city’s new backyard outdoor rink contest will be chosen Feb. 3.

“I am trying to make lemonade out of the lemon that is this lockdown,” Brampton Mayor Patrick Brown said Friday night upon tweeting out word of the contest.

When this is done, Brown is hoping Brampton is known as the city with the most outdoor rinks.

“My goal is to get 1,000 backyard rinks built in Brampton,” he said. “Backyard rinks are great for health, both physical and mental. Kids need activity and fresh air.”

And so do the parents.

“Build a backyard ice rink and submit a photo for a chance to win awesome prizes — like a one-hour skate with Killer and Captain Crunch,” said Brown’s tweet.

Brown said real estate company Re/Max has kicked in some Maple Leafs game tickets and Wayne Gretzky is going to donate a signed Team Canada jersey as well as books and memorabilia.

Mayor Brown said that word is already out about the contest and the phone is ringing off the hook.

“We did something like this with gardens in the spring and it was wildly successful and we’re expecting this to be the same,” said Brown.

It’s such a great idea that will no doubt inject some happiness into life at a time when all of the focus is on vaccines. The only booster being talked about here is the moral-boosting effort to bring out fun and community spirit. Let’s hope the campaign spreads across the GTA and Ontario.

Brown and his council are reminding people that getting out on the ice in the Canadian winter is an opportunity to do something special. Family skating is already a treasured activity at the postcard-like winter wonderland that is Gage Park and now the whole Brampton community is going to be involved with this new idea to help people get through a difficult period.

“Setting up a backyard rink is easier than you think!” states a news release offering advice for those who have never built one. “All you need is space, patience, frosty temperatures. Remember to keep safety top of mind. Map out the space in your backyard. Surface should be flat and free from mounds, heaves, stones and other debris. Ensure the rink isn’t located in an area that slopes towards the home, or too close to your home.”

Whoever makes the best rink will be able to say they have had Dougie and Wendel skate in their backyard.

Volvo to resume production at Virginia plant despite strike