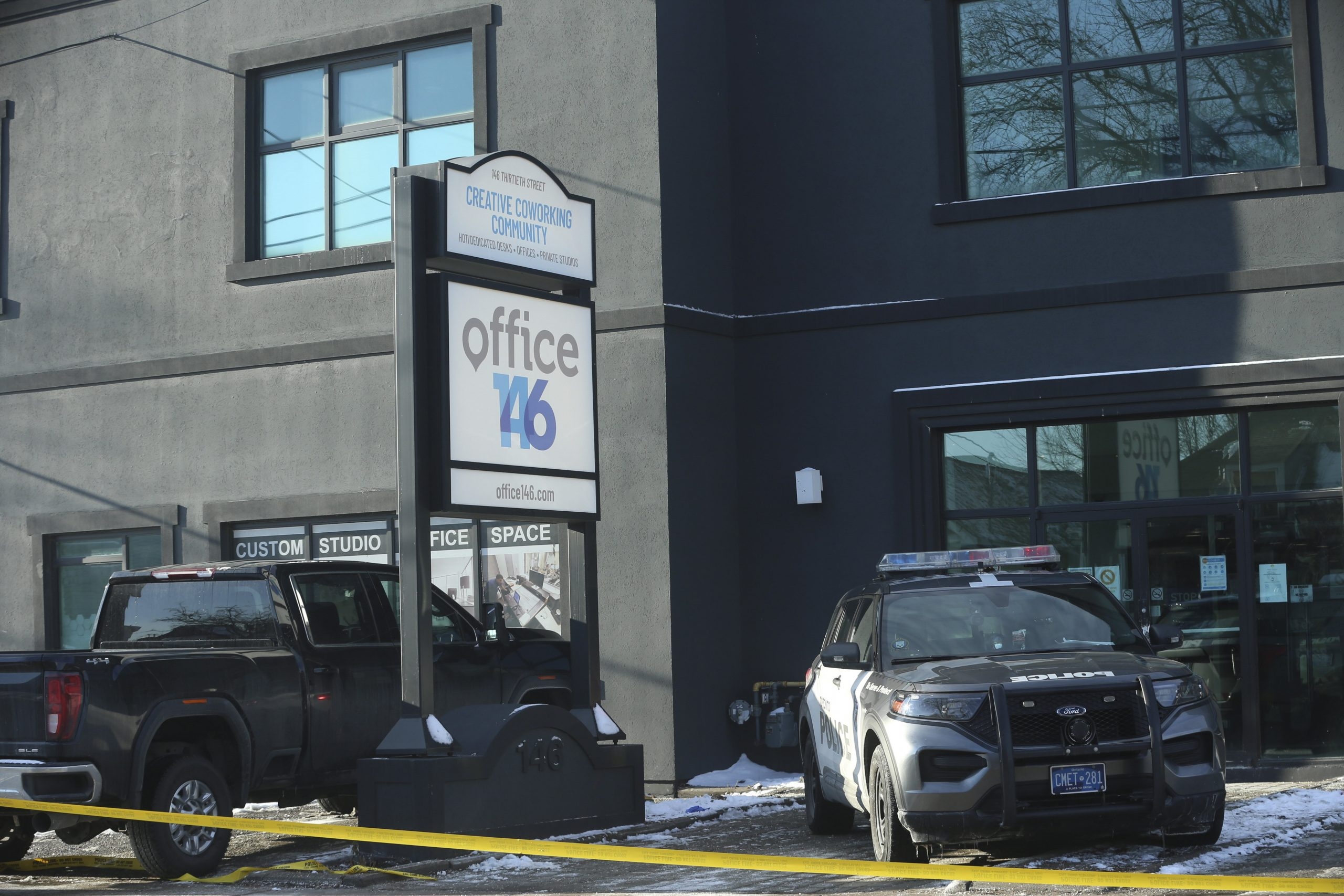 There were bloodstains on the pavement outside the entrance of the two-storey office building in Etobicoke.

Evidence of the horrific scene that played out Monday night.

Homicide detectives are investigating after two men were shot and killed and a woman injured when gunfire erupted on Thirtieth St. just south of Horner Ave.

Toronto Police on Tuesday night said the slain men have been identified as Minyali Wur, 24, and Chudier Reat, 20, both of Mississauga.

Jeff Waddell lives and works across the street and said he did not notice anything until he looked out a window and saw all the flashing lights.

“I saw a stretcher. A victim on a stretcher,” Waddell said. “One of them came out directly to an ambulance. And the other — they were just outside the entrance — there was another on a stretcher and they were giving him CPR.”

It is unknown where in the building the shooting happened.

Nearby residents say it houses various businesses, including recording studios that often seem to operate at night.

Waddell, a welder, said he never noticed any “shady goings-on” but that Monday’s mayhem is “a bit of a shocker.”

Another nearby witness was still working when cop cruisers suddenly arrived.

“There were 24 cop cars, three ambulances, three fire trucks,” said the man who did not want to be identified. “It was just chaos. They had the streets blocked off.”

He also echoed what Waddell said — that the shooting happened inside the building.

“They brought them down from inside. The guys that were shot,” the man said. “The one guy, they were pumping away on his chest. The other guy was covered.”

He said the frantic scene reminded him of some of the film shoots he has worked on.

“Except this time it was real life,” he said.

Throughout Tuesday, police officers were parked outside the front and rear entrances of the building.

Homicide detectives arrived, once again, in the afternoon and entered the building which is advertised as a shared office space in a residential and industrial area of Etobicoke.

Waddell — who, in an unrelated incident, had his vehicle stolen Saturday — said he felt safe here.

“With that, it has been a pretty eventful new year for me.”

Police are appealing for anyone who might have information about the triple shooting and double murder, to contact them.

Video released of suspect in attack, robbery of woman on Danforth

LILLEY: Trudeau smiles and waves; O’Toole beat up over vaccinations