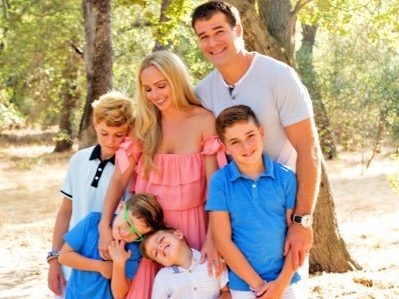 The NHLer’s wife, Christina, detailed in a series of tweets on Wednesday how the couple’s 12-year-old son Brody was “almost kidnapped” during a family holiday.

“Brody had gone down to the hotel pool to grab his sunglasses he had forgot,” wrote Christina, via @c_marleau where she has more than 25,000 followers.

“A woman started to follow him around, asking (him) questions, getting closer and closer. She was soon reaching out for him, trying to get him to go with her and her partner. Another family saw this happening and saved him. I owe them a thank you I can not even describe.”

Our son was almost kidnapped tonight. And I need to thank the Headlam family from Louisiana, the mom Jessica and dad saved Brody from a couple who was following him. Brody had gone down to the hotel pool to grab his sunglasses he had forgot.
1/

Christina gave thanks to “the Headlam family from Louisiana, the mom Jessica and dad” for “saving” the couple’s son.

“You are angels on Earth,” she said. “And for the scum of the earth that think they can pray on children … there is a special place in hell for you. And there are good people who will stop you.”

Christina Marleau did not name the hotel or the city involved.

“When Brody called, we rushed down to him,” she tweeted.

“When I saw the woman who tried to grab him at the bar, I let her know that cops had been called, hotel security was watching her and she needs to leave. Meanwhile, Mrs Headlam, unbeknownst to me, was already grabbing security as well.”

The Marleaus have four children and Brody is their second, according to the New York Post.

Marleau, a native of Swiftcurrent, Sask., was selected second overall by the Sharks in the 1997 NHL Draft and spent most of his career there. But he also played with the Leafs from 2017-2019.

The 42-year-old forward is currently a free agent.

“Thank you to everyone that reached out,” Christina tweeted.

“I shared this because A) it happened so quickly B) Brody is very aware of his surroundings, knows what to watch for but still targeted C) a woman was the aggressor. But mostly because of the Good Samaritans that intervened. We are lucky.”