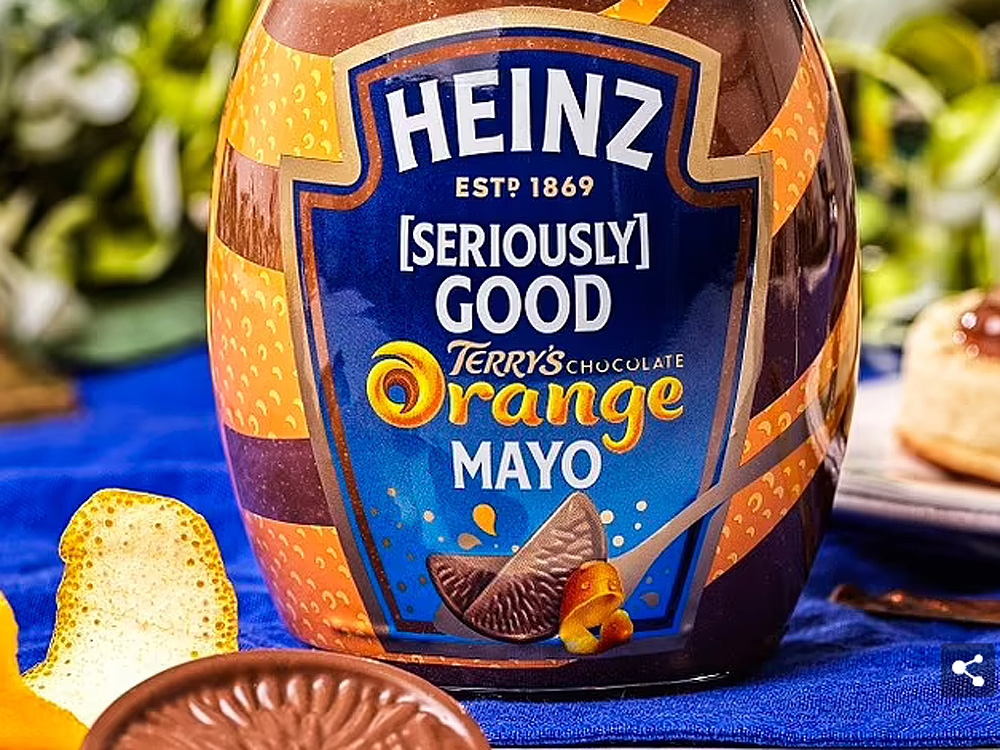 Just when you think you’ve seen the most disgusting food possible, a new list-topper comes along.

According to the U.K.’s Daily Mail , two top British brands have come together to create a new, limited edition — and stomach-churning — “treat” of chocolate orange mayonnaise made to celebrate the holidays.

Only 200 jars of Heinz [seriously] Good Terry’s Chocolate Orange Mayo were made available in the U.K. and anyone with a palate that could handle that outrageous combination had to enter an Instagram competition to land one.

“Since Terry’s Chocolate Orange launch in 1932 we have never stopped innovating, growing, and launching new formats and flavours to delight our loyal fans, and we are proud to be continuing this this Christmas with our mayo mash up, which works perfectly as a delicious spread,” Terry’s Chocolate Orange marketing controller Laure Gentil told the Daily Mail .

“We always say that you can never get bored with Terry’s Chocolate Orange, and our new collaboration with Heinz epitomizes this.”

But the bizarre concoction is only one of many nasty foods we’ve seen come out in 2021, even though you’ve probably never seen them on the shelves of Canadian grocery stories.

How’s Kraft’s pink, candy-flavoured mac and cheese (Kraft Dinner in the great white north) grab you? Yes, Kraft released a version of KD that came with a “candy flavour packet” that turned the mac and cheese a gaudy pink and added a hint of sweetness to the meal. And it was released in time for Valentine’s Day, since nothing says “I love you” like pink, candy-flavoured KD.

Another product released south of the border early in 2021 was Coca-Cola with coffee . Five different versions of the drink, including two of the zero sugar variety (Dark Blend and Vanilla), hit stores to give people who “are often torn between reaching for a soft drink or a coffee” the option of combining the two.

“This is a beverage that’s truly meant to be tasted,” Coke’s brand director Brandan Strickland said on the company’s website.

Jeni’s Splendid Ice Cream tried convincing consumers to eat the frozen product for breakfast with their Everything Bagel-flavoured cream cheese ice cream that featured the taste of sesame and poppy seeds with hints of onions and garlic. The flavour was part of a limited edition “Ice Cream for Breakfast Collection” that included Coffee with Cream & Sugar, Honey Vanilla Bean, Skillet Cinnamon Roll, and Wildberry Lavender.

Jet-Puffed took away one part of the marshmallow-toasting procedure by giving us burnt-flavoured ‘mallows . Yes, they even look burned. Not sure if they’d make the ‘Smores taste any better, though.

There were certainly other oddities released by food makers in 2021 — Kellogg’s Froot Loops Cereal Straws, Twizzlers Mystery Flavour and pink and green Lady Gaga Oreos (what flavour is that?) were three– but the good news is most were limited edition types created to generate a buzz, not products that are here to stay.

‘I WAS HAPPY WHILE IT LASTED’: Woman who married herself gets divorced

Ontario to reopen borders with Manitoba and Quebec Wednesday

WARMINGTON: The deadline has been lifted, but risk for Afghan interpreters still there