Solving cold cases one letter at a time 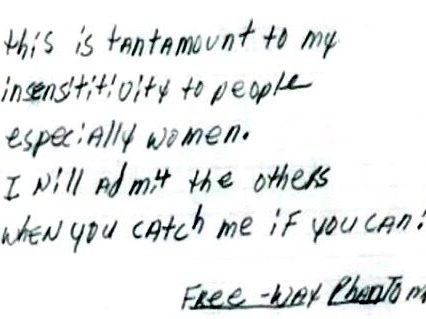 “I will admit to the others when you catch me if you can.”

Those ominous words were written by the Freeway Phantom, an unidentified serial killer who haunted Washington D.C. in the early 1970s. The “admission” of a killing is part of a letter found in the pocket of victim Brenda Denise Woodard when her body was found.

“this is tAntAmount to my insensititivity [sic] to people especiAlly women,” he wrote.

The letter is one of more than 500 letters from serial killers compiled in a database in an effort to reopen cold crime cases in the United States. The database is the brainchild of the husband and wife team of Alex and J-Lynn Baber, who run Cold Case Consultants of America , an agency that specializes in unsolved homicides.

The organization has the largest known singular database of letters written by serial killers, with some pieces dating back to 1944.

In an interview with the Sun, Alex Baber said the database of the letters was compiled after 15 years worth of file requests with federal, state and local agencies.

“This foundation was then strengthened with additional letters held by former detectives, their families, and the families of the victims that granted us access to their personal files,” said Baber.

With the help of a team of experts: forensic document examiner Curtis Baggett, forensic anthropologist Dr. Arpad A. Vass, detective Patrick Apoian, and Michigan Broadcasting Hall of Fame inductee Joe Cochran, the CCCOA will soon be releasing new evidence in an effort to shed light on a number of cold cases, which include the Freeway Phantom, Ohio’s Circleville Writer, Texarkana Moonlight Murderer and Oakland County’s Child Killer to name a few.

Baber said the organization has uncovered some previously overlooked letters — with some written off as hoaxes that have been proven otherwise.

Baber hopes the database will help investigators by cross-referencing aspects such as location, date and context to help create possible connections to crimes that were previously overlooked.

“We then search for forensic linguistic similarities on any registered returns in order to lock down the facts, correlate and then analyze each return individually,” said Baber. “This procedure has resulted in uncovering new leads on physical evidence we are currently using to close multiple cold cases.”

The CCCOA hopes the database — in combination with forensic science advancements — will help reopen unsolvable cases and exonerate the wrongfully accused.

Where will the Americans leave after Afghanistan?

Woman says her boat had problems before Iowa ride accident