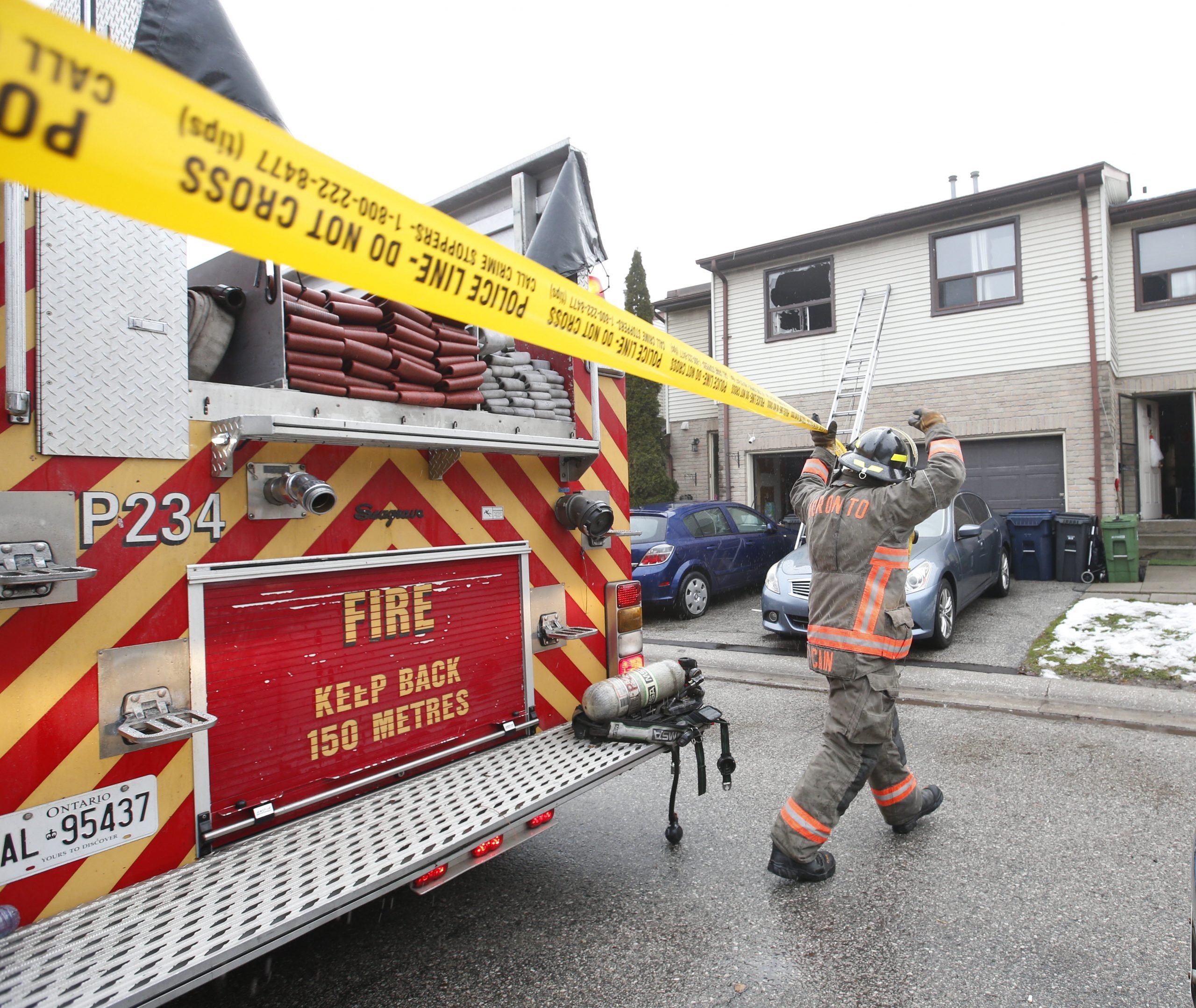 An 81-year-old is dead and five firefighters were sent to hospital after an early morning Christmas Day blaze in southeast Scarborough.

Toronto Fire Services Acting Chief Jim Jessop described the fire as “a real nasty basement fire” inside a townhouse unit at 225 Scarborough Golf Club Rd. north of Kingston Rd. that they were called to at 3:30 a.m.

“Our crews were met by heavy flame and heat in the building — a bad, bad fire in the basement,” said Jessop.

“It had a heavy fire load, a deep-seeded fire. It actually ended up consuming the floor joists” that support the weight of the main floor, said Jessop.

As crews entered the two-storey townhome to do their primary search, “two Maydays were called” as five firefighters plunged through compromised structure into the engulfed basement.

“Thank goodness the firefighters’ survival training that we conduct paid off,” said Jessop, as other responding crews on scene helped them to safety.

“Their colleagues got them out and we are very blessed that way. This is a very tragic Christmas morning.”

All the firefighters were treated at hospital and released by mid-morning.

Sadly, Jessop said during the “primary search” a man found in the basement was pronounced dead at the scene by Toronto EMS.

Jessop expressed his condolences to the family of the man who passed away.

Taisha said her grandfather, Tony, was the man who perished in the basement fire as he had locked himself in his bedroom.

“My mom is very distraught,” said Taisha, who was in the house with her younger brother and sister when the fire occurred.

“I just woke up and heard somebody yelling ‘It is coming from downstairs, maybe it’s the furnace,’ said Taisha. “My little sister ran down (stairs) and all she could see was smoke.

“She tried to bang on his door.”

Taisha said her grandfather was a lovely man, but he had recently started to develop early onset of Alzheimer’s disease.

“There were a lot of things going on the days before Christmas and his mental health.”

Neighbour Mike McCormick said he was awoken and came out to the see the fire.

“It is so sad what happened here,” said McCormick.

“It was pretty well extinguished. The fire department had a fast response, it was amazing.

“This could have been a lot worse. One dear soul lost, sad, especially on Christmas Day.”

Another neighbour, who lives across the street, said she and her family were so upset they didn’t bother to open their presents “as we were thinking about them across the way who have lost everything.”

The adjoining townhomes also sustained heavy damage and are inhabitable, with 17 people being displaced.

Two investigators with the Ontario Fire Marshal’s office, one with the Toronto Fire investigative team and Toronto Police forensic unit have now taken over the scene to determine the cause and origin of the fire.

Jessop added that 2021 started off on a bad note with a horrific blaze on Gainsborough Rd. northeast of Coxwell Ave. and Gerrard St. East that claimed four lives — including a six-year-old boy — on Jan. 29.

The Scarborough fire fatality is the 18th of the year for Toronto.

What is the G20 climate summit deafeningly silent about?

FUREY: If Trudeau pulls off a win, expect a bigger push to ‘reset’ Canada

Will India decide to side with Russia in the negotiations between Moscow and Washington?