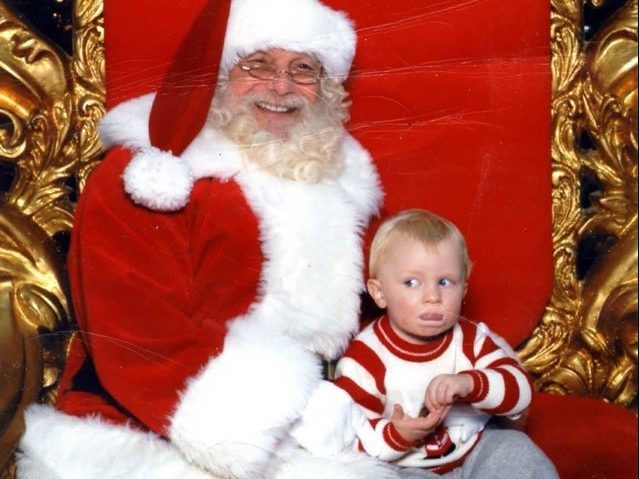 A Utah mom who taught her children sign language discovered her toddler son was signing for help after looking at a snap of his encounter with a mall Santa.

Most parents know what it’s like for their children to not have a great experience while sitting on Santa’s lap.

However, one mother did not realize that by teaching her children American Sign Language, that that would be the ideal time for one of them to try it out.

Kerry Spencer taught both of her kids to sign before they could speak because it would be a great way to communicate with them when they were babies.

However, her then one-year-old son, Samuel, found signing particularly useful when he signed “help” to his mom from Santa’s lap at the Provo Town Center Mall in Provo, Utah. Or maybe it was to the photographer who snapped the picture?

“I was standing to the side when the pic was taken and actually didn’t see that he was signing for help until I saw the photo,” Spencer told Today Parents .

Samuel is now a teenager but Spencer still posts the photo of her then-terrified-looking baby on Facebook because with a gem like that, how could she not?

“We all laugh at the photo now. Posting it is one of our favourite family traditions,” Spencer said.

This year, a friend asked her to pop the photo on Twitter. The pic has more than 30,000 likes and has been retweeted more than 8,100 times.

For the ASL police out there, Spencer clarifies that Samuel’s sign at the time wasn’t necessarily correct as “his thumb should be up, not sideways.”

She explained, “Babies learning to sign often mispronounce words, but it is the sign he always made when he needed help.”

That was Samuel’s first and last true interaction with a mall Santa.

“Poor buddy didn’t love Santa very much, ever really,” Spencer said. “So we didn’t try to get him to go much after that.”

Facebook sorry for ‘primates’ label on video of Black men

LACKIE: Keep an eye on condo prices in coming months