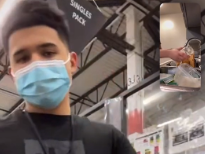 A woman has been called “insane” – among other things – on social media for forcing her boyfriend to FaceTime her for his entire 12-hour shifts.

Jose Macias works at an Amazon warehouse and he keeps his phone on and up for his girlfriend, Nela, who is seen washing dishes, while he packages products.

Why? She doesn’t “trust” his female co-workers.

Nela took to TikTok to share, “My boyfriend needs to facetime me his whole 12 hours shift. NOT BECAUSE I don’t trust him but because I don’t trust females.”

She added in the caption, “Might quit my job and go work with him.”

Needless to say, Nela was slammed for her actions, with the consensus calling her “insecure,” “extra” and “insane.”

She was called out for her lack of trust in her boyfriend, despite insisting she does, and is putting Macias’ job at risk.

“Free him,” one person suggested, while another simply wrote, “THIS ISNT NORMAL.”

Others joked that they didn’t feel sorry for the boyfriend but for the phone’s battery.

“You could probably cook an egg on his phone,” commented one user.

The video, which was posted on the couple’s shared account, has more than 5.6 million views.

In a follow-up video , Nela posted another clip of her boyfriend on FaceTime while he works with the words, “FaceTiming my boyfriend part two, so I know he isn’t flirting with girls.”

She added the caption, “Submitted my resume already.”

And in another video , she writes, “My boyfriend is my only friend so when he’s at work I feel sad, depressed.”

Macias is clearly fine with her jealous streak.

On his own TikTok page, he posted , “My girl: now that you work at amazon you better not be entertaining other females,” and asks, “My girl says Amazon is full of cheaters is that true? I COULD NEVER.”