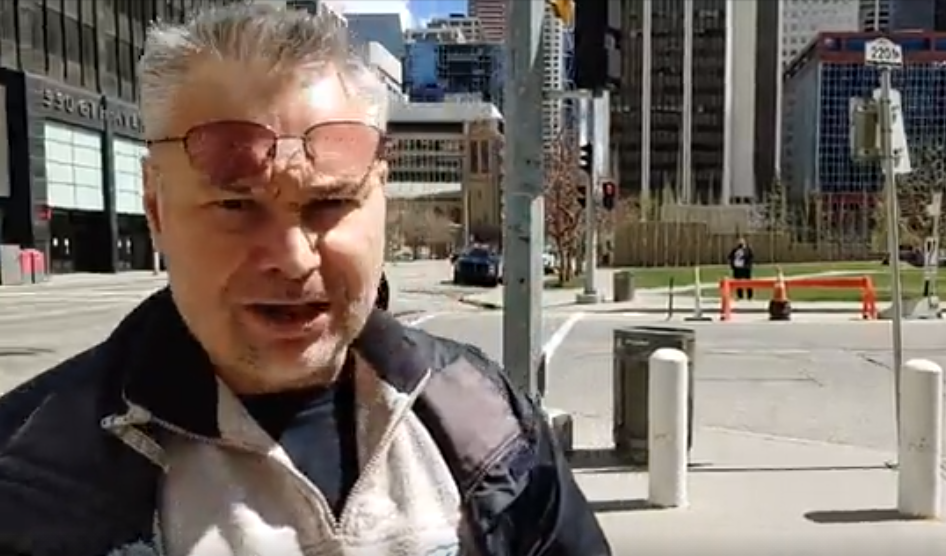 The fringe Calgary mayoral candidate has been sentenced to 18 months in an Ontario jail in connection with the harassment and defamation of a Lebanese-Canadian business owner.

Johnston — who often incorrectly labels himself as “Mayor-Elect” ahead of the Oct. 18 election — was charged earlier this year with contempt for continuing to make racist and defamatory public statements about Paramount Fine Foods owner Mohamad Fakih, calling him a “baby killer” and a “terrorist”, despite a judge ordering him to stop.

Justice Fred Myers says Johnston wasn’t being sentenced for his political views but because of six separate acts of contempt of court.

“It [the sentence] sends a message to everyone that the laws are here to protect us and the justice system is available to people who have a different name like mine,” Fakih tells 680 NEWS. “The only reason behind the sentence is because I’m Muslim.”

Once Kevin J. Johnston finishes his sentence in #Alberta, the controversial #Calgary mayoral candidate must head back to #Ontario, where Justice Fred Myers sentenced him to 18mo jail time after being found guilty of 6 Contempt of Court charges. Sentence begins Jan 4, 2022. #yyc https://t.co/KQLN7G4IAc

In 2019, Johnston was convicted of harassment against Fakih after targeting his religious beliefs for several years. The judge in that case ordered Johnston to pay $2.5 million in damages and called it “hate speech at its worst.”

Fakih says Johnston has yet to pay any of the money.

Fakih’s media relation’s team says criminal convictions and pending charges do not prevent a candidate from entering the mayoral race in Calgary. It’s something Fakih says needs to change.

After years of Fakih’s legal battle with Johnston, he says he encourages others to stand up against hate.

“Our silence is what’s making them feel emboldened. Clearly now the justice system came on the side of the good people. Hopefully all of us together will defeat hate forever,” he said.

Despite being also ordered to cease the targeting, Johnston continued and was charged earlier this year for several counts of contempt before eventually being convicted.

Johnston cannot legally leave Alberta until next year because he’s currently serving a jail sentence at the Calgary Remand Centre.

That 40-day sentence, which he is serving on the weekends, was handed to Johnston in September after he was found guilty of breaking COVID-19 health orders by holding illegal gatherings, and for his continued harassment of Alberta Health Services workers.

At one point, Johnston had said that if he was elected mayor, he would order the police to go to AHS workers’ homes. He said if police refused, he would do it himself.

Earlier this year, the AHS was granted a restraining order against Johnston.

With files from Julie Arounlasy

Woman dies after being struck by a vehicle in North York