‘Runs Through Their Blood’: New doc on Citytv highlights horrors of residential schools 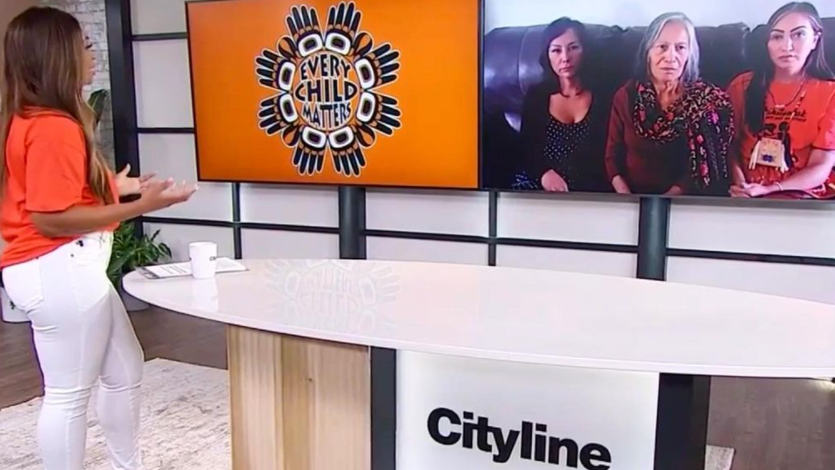 When Maawdii Pitawanakwat was just four years old, she came home from school and her sisters were gone.

Her siblings were just some of the estimated 20,000 Indigenous children taken from family and forced into foster homes in what was called the Sixties Scoop — a grim part of Canada’s past.

Pitawanakwat’s story is one of seven in a new documentary called “Runs Through Their Blood: A Life Impacted,” which dives into how residential schools and the terrible treatment of Indigenous peoples has caused decades of intergenerational trauma.

In an extended interview with Cityline’s Tracy Moore, the documentary’s creators open up about how the discovery of 215 children buried in Kelowna, B.C. inspired their work.

“It’s not a conversation people have every day. The thing that was bothering us was the 215 [children] in Kelowna. It was like the whole world woke up,” said Angela Kijadijiwan, the film’s producer. “But this has been happening for so long.”

Izabelle Langendoen is one of the film’s writers. Her voice began to break when speaking about her mom’s reaction to the documentary.

“She told me her story because of the film, and it was very emotional for me because she wouldn’t have told me this if we didn’t make the documentary,” Langendoen said, wiping away tears. “So it just proves that we can start healing from this, and healing our children and not passing on this intergenerational trauma that’s been lasting so long.”

DJ Pyette, director and writer, added that one way to stop the pain is to break the patterns of the past.

“Look back at what has been done and change it. If we got beaten really bad, don’t do that. Try another technique. Listen to your children. Don’t just be mad at yourself and take it out on them,” she said, beginning to get emotional. “That’s where a lot of kids get put in worse homes. A lot of people think the home is bad itself when the kid gets taken and then they get their haircut, they get beaten, they get murdered and they’re call liars, and we can’t protect ourselves. It needs to stop.”

Kijadijiwan says if anyone wants to help the national healing, the first step is simple: visit a reserve and make friends with an Indigenous person.

“Talk to some people. You need to really realize that’s how you learn – by having the conservation,” she said. “We understand you didn’t do this to us. You as a person. But just know, that historically, this happened.”

The three Anishinaabeg women credit the Weengushk Film Institute on Manitoulin Island as a place that keeps Indigenous culture alive. Their film school includes lessons about the land, medicine and repairing their spirit.

Pyette said, “Everyone that knows me know I’ve been the most negative person all my life. Scream my head off, hurt myself — I didn’t care. And I just want to be happy. All thanks to Weengushk.”

The full documentary and extended interview will be available on CityNews.ca on Oct. 1.

Afghanistan’s neighbors wary as US seeks nearby staging area