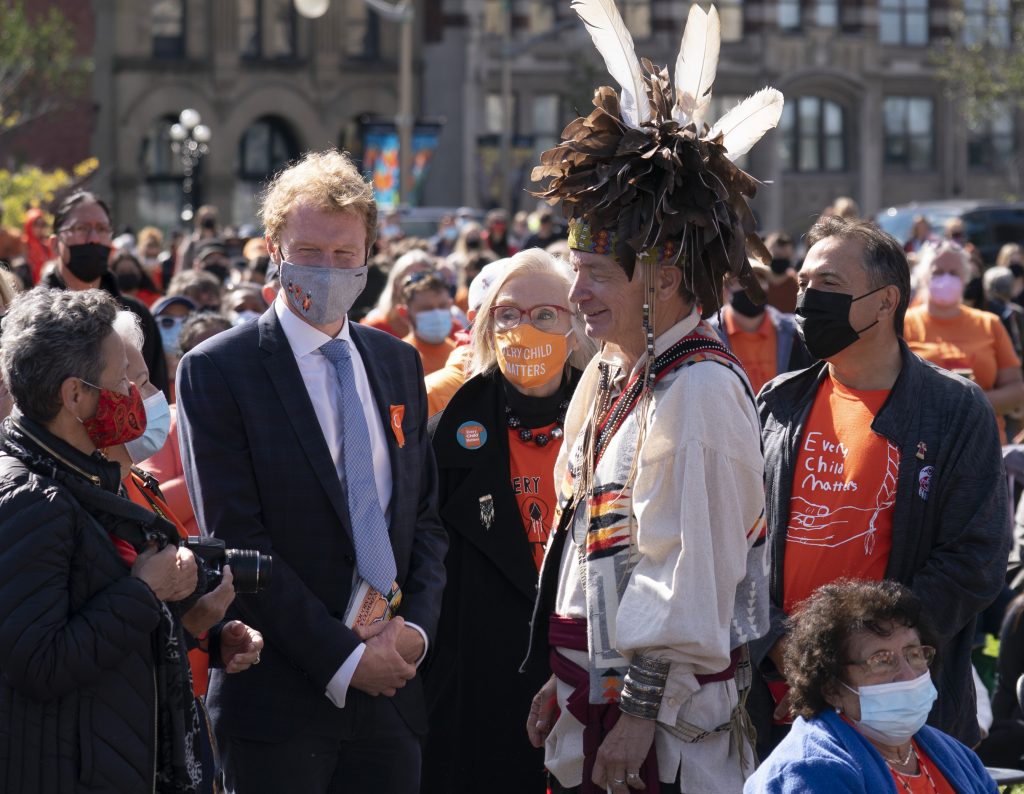 “We the survivors will be there to guide people towards this reconciliation,” George-Kanentiio said from a stage on Parliament Hill during a ceremony to mark the first National Day for Truth and Reconciliation in Canada.

George-Kanentiio told the crowd the story of his friend, Joey Commanda, who was killed by a train in 1968, when he was escaping the Mohawk Institute residential school in Brantford, Ont.

He said in August he was part of the Walk for Joey, which retraced the steps Joey took, and that the event sparked healing when Indigenous Services Minister Marc Miller and Crown-Indigenous Relations Minister Caroline Bennett attended, not for political benefit but because “they felt in their souls this needed to be done.”

“It was at that moment (that) the history of Canada began to change,” he said.

He is now hoping Miller, Bennett and Prime Minister Justin Trudeau are prepared to hear the calls from survivors for “tangible” actions, including demands for criminal investigation and prosecution concerning the abuses and deaths of hundreds of children in residential schools all over Canada.

RELATED: ‘I wish it was getting easier’: What has changed in the year since Joyce Echaquan’s death?

“Every residential school site, 130 of them, has to be declared a criminal site, a place where the most grievous crimes were brought to bear upon those children,” he said. “Every site has to be protected.”

He received the loudest applause, however, when he said the survivors want “a stand-alone Indigenous national museum with a residential school component attached.”

“We will not be put into the museum of culture and Canadian history, we will not be shuffled off to some other corner,” he said. “We need our own facility.”

George-Kanentiio, a member of the Akwesasne Mohawk Nation that straddles the Canada-U. S. border, is a former trustee of the National Museum of the American Indian. He said the vision for that museum, which opened in Washington, D.C., in 2004, started from nothing, but “we did it because we had this compelling vision that became a moral obligation that we were going to build a national museum literally within the shadow of the United States Capitol.”

“Nothing less should be done here in Canada,” he said, as the crowd roared its approval. “That we need this institution, to preserve our heritage, to collect our memories, and to ensure that Canadians into the seventh generation remember this part of our common experience.”

The National Centre for Truth and Reconciliation is the archive for the documents and oral histories collected by the Truth and Reconciliation Commission. Currently housed at the University of Manitoba, the Liberals promised to fund construction of a “permanent home” for the centre, budgeting $60 million in their platform for the 2022-23 fiscal year, and $5 million in annual operating funds after that.

But Canada does not have a national museum dedicated to and built by Indigenous Peoples.

Three kids, one man wounded as tot’s birthday party shot up in Rexdale

GAFFES AND SCANDALS: Justin Trudeau gets two minutes for elbowing in 2016