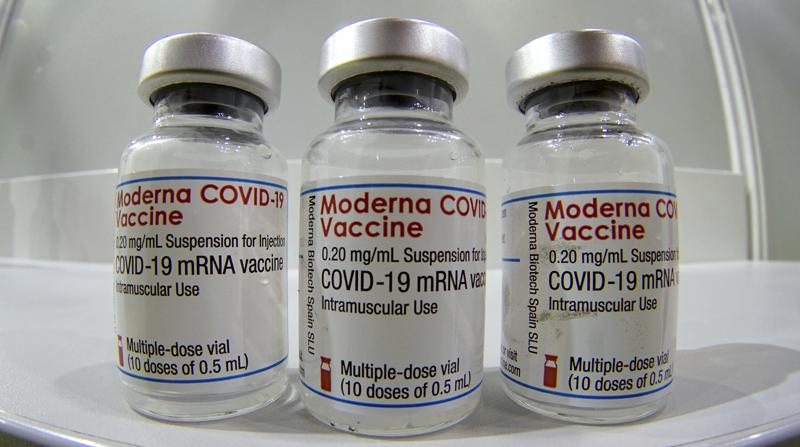 Ontario recommends only the Pfizer-BioNTech (Comirnaty) vaccine be used in the 18 to 24-year-old age group due to a rare symptom caused by the Moderna (Spikevax) vaccine.

The provincial government made the determination following an increase in the heart condition known as pericarditis and myocarditis.

Ontario chief medical officer of health, Dr. Kieran Moore, says it’s out of an abundance of caution and effective immediately.

The decision is based on the advice of Ontario’s children COVID-19 vaccine table, Ontario’s vaccine clinical advisory group and Public Health Ontario.

Moderna’s mRNA vaccine has a higher rate of the rare side effect in the age-mentioned earlier group, particularly among young men. Between June 1st and August 7th of this year, Moore says based on 96,000 administered doses of the mRNA vaccines to males aged 18 to 24, the risk of pericarditis and myocarditis following a second Moderna dose was 1 in 5,000.

It affects only 0.1 per cent of vaccine recipients.

For those who received the Pfizer-BioNTech, the rate was one in 28,000.

The majority of reported cases have been mild, Moore says, with affected individuals recovering quickly, usually with the help of anti-inflammatory medication.

Symptoms have typically been reported one week after a vaccine shot, more commonly after a second dose. The province assures that those who have not reported symptoms should feel confident they will not develop the rare side effect at a later date.

Moore says that individuals aged 18 to 24 that received Moderna as their first dose can safely take Pfizer-BioNTech as their second shot, adding that mixing vaccines is safe and effective.

Should residents wish to receive Moderna as their second shot and prefer to do so, the province says it can be authorized with informed consent. Moore says provincial health officials will continue to administer the Pfizer-BioNTech vaccine in youths aged 12 to 17, including those turning 12 in 2021.

There are just under three million doses of the Pfizer vaccine readily available in Ontario. Moore says there is a significant supply to ensure that the province moves ahead with the recommendation.

Moore is assuring residents that received the first shot of Moderna that they “absolutely did the right thing” to protect themselves against the virus and the Delta variant.

Provincial data says 86 per cent of people aged 12 and older have at least one COVID-19 vaccine dose, and 80 per cent have received both shots.

Health Canada announced in mid-September that both Pfizer-BioNTech and Moderna’s mRNA vaccines were formally granted full approval for anyone aged 12-and-up in the country.

Pfizer-BioNTech’s vaccine was initially authorized for use in Canada under an interim order on December 9, 2020.