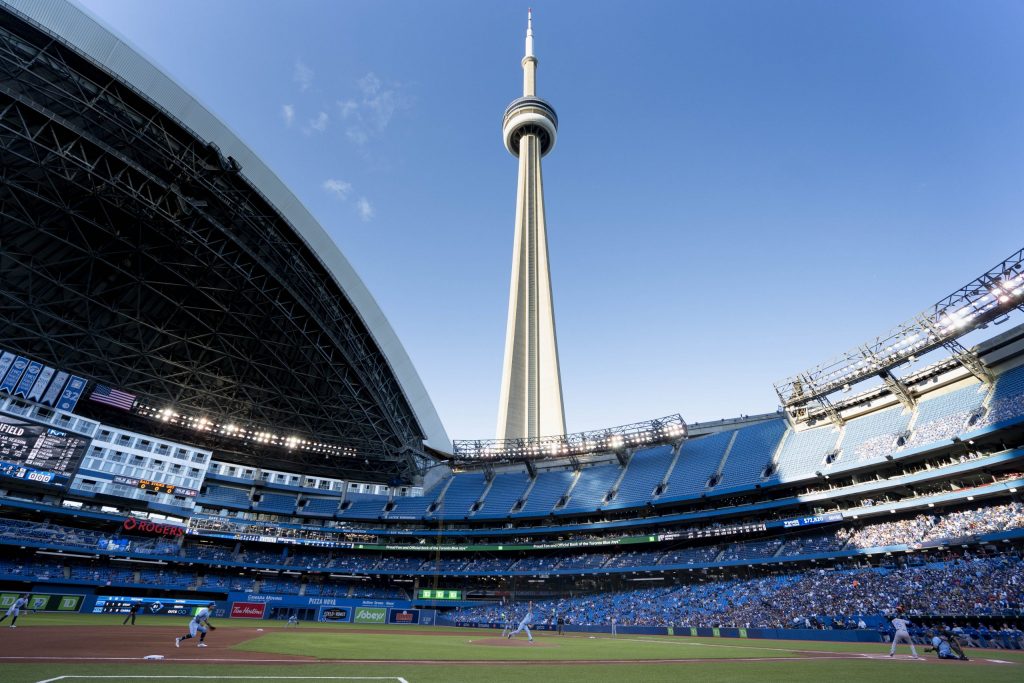 Boston closed within one game of the wild card-leading Yankees after winning 6-0 at Baltimore, and Toronto is one game back of the Red Sox. Seattle, which began the day 2 1/2 games behind the Yankees, hosted Oakland in a late game.

Marcus Semien hit a go-ahead, two-run homer in the first off a faltering Gerrit Cole, setting a big league record with his 44th home run of the season as a second baseman. Semien topped the 43 by Davey Johnson for Atlanta in 1973.

George Springer doubled on Cole’s first pitch and Semien homered on Cole’s sixth. Springer hit an RBI single in the second and Bichette’s solo homer in the third built a 4-0 lead against Cole, who allowed his first six hits on fastballs.

“Our game plan to establish the fastball and their game plan to jump on it kind of matched up together,” Cole said.
Kyle Higashioka hit a tying, two-run single off Tim Mayza in the seventh.

With the score 5-all, Bichette led off the eighth against Clay Holmes (8-4) with his 28th home run, an opposite-field drive that cleared the scoreboard in right-center.

“He bailed us out,” Semien said.

Bichette beat his chest and raised his fist as he looked into Toronto’s dugout while rounding the bases after his second homer. He has eight home runs against the Yankees this season.

“I still really haven’t calmed down yet,” Bichette said. “Just a lot of excitement. Big spot and I got the job done, so it felt good.”

Adam Cimber (3-4) got four outs for the win. With a runner on second and the crowd of 29, 601 on its feet, Jordan Romano retired Tyler Wade on a game-ending flyout for his 22nd save in 23 chances. He has converted 22 in a row, the longest active streak in the big leaguers.

New York’s Joey Gallo hurt a hand when he was hit by a Mayza pitch in the sixth and left the game. Yankees manager Aaron Boone said Gallo was set for an X-ray and that his condition would be updated Thursday.

Boon said Luke Voit felt pain in his knee while running to first after striking out as a pinch hitter later in the inning. Voit broke for first on a wild strike three even though there was a runner on first and fewer than two outs.

“Hopefully he should be OK,” Boone said. “When he stopped, it just kind of bit him a little bit.”

Cole allowed five runs and nine hits in six innings, raising his ERA to 3.23. He could start Sunday on three days’ rest against Tampa Bay in the regular-season finale or would be lined up to pitch next Tuesday’s wild-card game.

Cole said he would be ready “as soon as possible.”

“I wish I could keep pitching right now,” Cole said, “and start throwing up some zeroes and make up for it.”
Toronto has hit a major league-high 251 home runs. Bichette set a Blue Jays singlle season record for home runs by shortstops.

“It’s a special group on both sides of the ball,” Bichette said.

Jose Berrios retired the first 14 Yankees in order, striking out seven, before giving up three straight hits in the fifth. Gleyber Torres broke up the perfect game with a double down the left- field line, Gio Urshela hit an RBI single and scored when Brett Gardner doubled.

Guerrero snapped an 0 for 20 slump with an RBI double down the line past drawn-in third baseman DJ LeMahieu in the bottom hal, That scored Springer, who reached when Gallo and Urshela failed to communicate and allowed his leadoff fly to drop between them just 210 feet from home plate in left field for a double.

“Joey’s just got to completely take charge on that one,” Boone said. “He’s just got to be super-aggressive, get loud and take it.”

Aaron Judge’s sacrifice fly in the sixth cut it to 5-3.

“This is what we dream of doing. I wouldn’t be playing baseball if it wasn’t for moments like this” – Bo Bichette pic.twitter.com/wGG5lZYsHD

Bichette’s two-homer game was the fifth multi-homer game of his career. He leads the AL with 55 multi-hit games this season.

RHP Jonathan Loaisiga (shoulder) was activated and pitched a perfect seventh. LHP Andrew Heaney was optioned to the Florida Complex League. RHP Jameson Taillon, who left Tuesday’s game after aggravating his right ankle, is expected to undergo an MRI when the team returns to New York. It’s not clear whether Taillon will pitch again this season.

Man killed in assault on Gerrard Street near Broadview