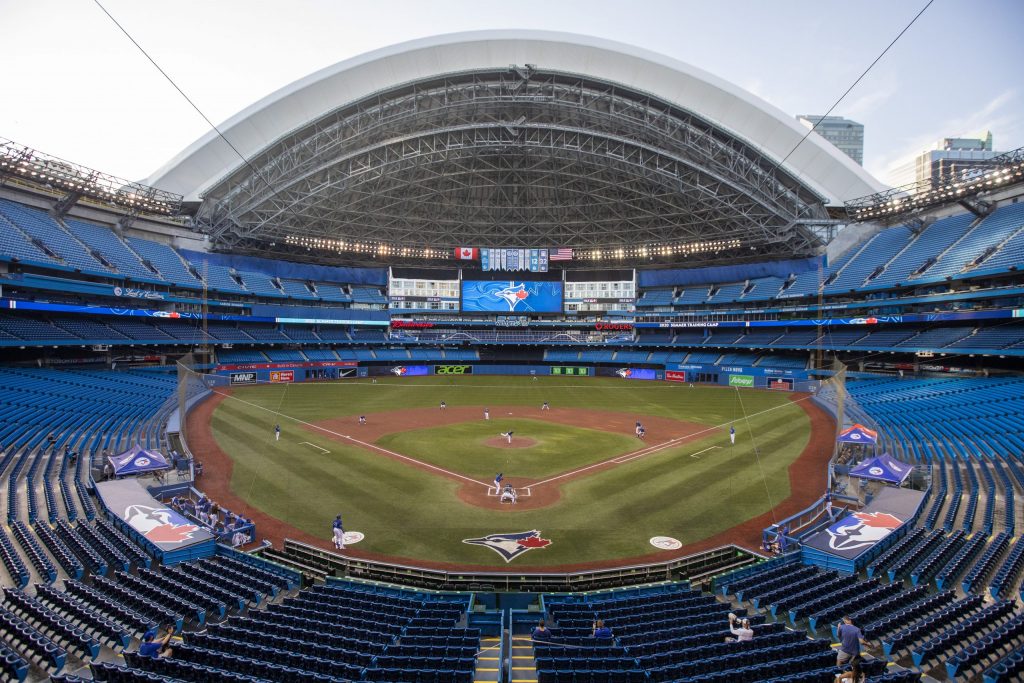 Three Yankees homered to power New York to a 7-2 victory over the Toronto Blue Jays on Tuesday night in the opener of a critical three-game series.

The Yankees (90-67) moved three games up on Toronto (87-70) and extended their winning streak to seven games. Despite the loss, the Blue Jays remained one game behind the Boston Red Sox, who are clinging to the second wild-card spot.

The Red Sox, who were swept by New York last weekend, dropped a 4-2 decision to the Baltimore Orioles for their fourth straight loss. The Seattle Mariners, meanwhile, were tied with Toronto entering their game against the visiting Oakland Athletics later Tuesday night.

A recent loosening of venue capacity restrictions in Ontario allowed for attendance at Rogers Centre – announced at 28,769 – to essentially be doubled from the stadium’s previous limit.

Leadoff hitter George Springer helped boost the playoff-like atmosphere by staking the Blue Jays to a first-inning lead. He was walked by Yankees starter Jameson Taillon, stole second and scored on a Bo Bichette single.

Taillon, making his return after a three-week absence due to a right ankle tendon issue, took himself out of the game after 2 1/3 innings when he aggravated the injury. He was replaced by right-hander Michael King (1-4).

Blue Jays starter Hyun Jin Ryu was reinstated earlier in the day after a stint on the 10-day injured list (neck). Judge worked a full count on the veteran left-hander in the third inning before hitting his 37th home run of the season.

Toronto’s Corey Dickerson got the start in left field with Lourdes Gurriel Jr., serving as designated hitter after missing three games due to a finger injury. Bichette led off the fourth with a single and Dickerson drove him in with a double to restore Toronto’s one-run lead.

The Yankees got to Ryu in the fifth when Urshela hit a one-out single and moved to second on a DJ LeMahieu walk. Anthony Rizzo flared a single to left field and Dickerson’s throw hit Urshela as he ran down the third-base line.

Sidearmer Adam Cimber relieved Ryu with two runners in scoring position. Judge lined out to right field to bring home LeMahieu on a sacrifice fly with the go-ahead run and Stanton grounded out to limit the damage.

Toronto reliever Nate Pearson worked a scoreless frame before Trevor Richards was tagged for three runs in the seventh. LeMahieu singled and Judge walked before Stanton hit a no-doubt blast for his 35th homer of the year.

Urshela’s solo shot in the ninth inning was his 14th homer of the season. New York outhit Toronto 11-3.

Ryu (13-10) gave up six hits, three earned runs and a walk while striking out three.

‘I FREAKED OUT!’: Lightning strikes twice for Barrie lotto winner