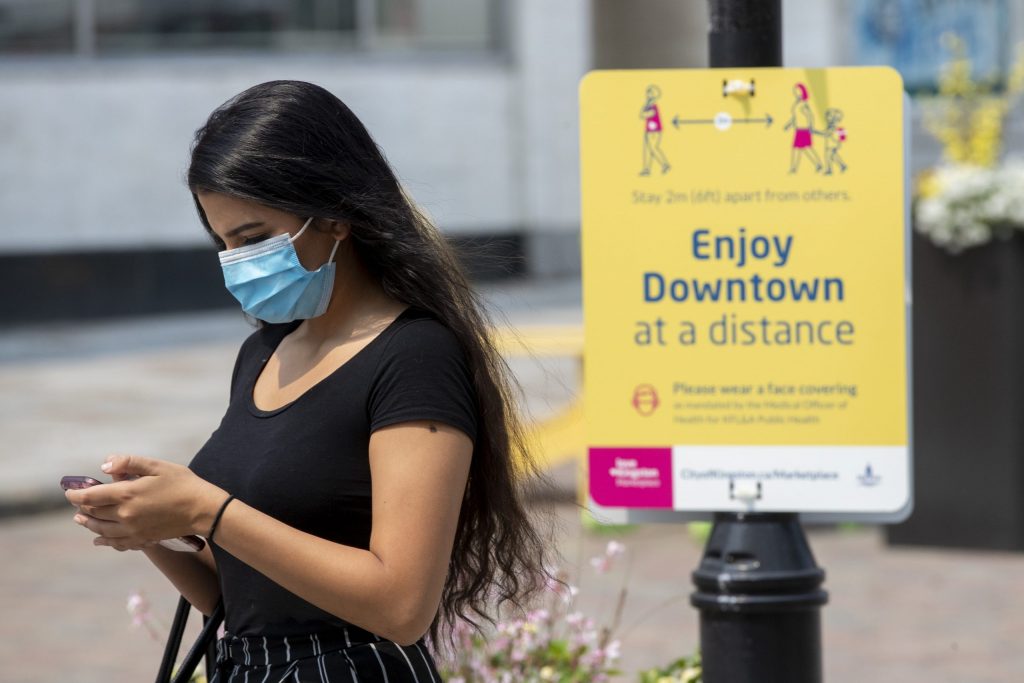 Ontario’s daily COVID-19 case counts are lower than what many experts had expected by now, and while they point to a number of factors for the relative relief, they say now is not the time to ease up on those measures.

For much of the summer, the province’s top doctor warned of a September surge, followed by a bleak fall and winter. That has not materialized – yet – as the daily case counts remain under 1,000 and the graph of Ontario’s seven-day average roughly shows a plateau since the beginning of September.

That’s well under the worst-case scenario in Ontario’s most recent modelling, which showed about 4,000 daily cases by now. Reality is more in line with the best-case scenario, in which cases would have steadily fallen since Sept. 1.

“There is a little bit of cautious optimism in that with society being more open, kids back to school, all of the things that we…would have concerns about leading to escalating transmission, we’re not seeing,” he said.

Ontario’s vaccination campaign is certainly helping, he said, particularly the targeting of high-risk communities. About 86 per cent of eligible people have received at least one dose.

“I think Ontarians are being prudent and cautious and have realized that this virus can take off at any given time if we let our guard down,” he said.

“Sadly, we only have to look out west to see what can happen if we let our guard down with this Delta.”

In Alberta, there are more than 10 times the number of active COVID-19 cases per capita than Ontario. Hospitals there are overwhelmed and the head of the Alberta Medical Association says major components of triage have already started.

Chagla noted that Alberta’s vaccination rate is not substantially lower than Ontario’s. What he sees as the major reason for Ontario’s relatively lower numbers is the different approach to public health measures.

In July, Alberta lifted its restrictions, including gathering limits and a mask mandate, while in Ontario a few weeks later, the government announced that it would delay any further lifting of restrictions. Masks were still going to be required even when the province moved out of Step 3 of its reopening.

Masks certainly help, Chagla said, but it also matters what signal a government is sending, whether the pandemic is being treated as over.

“I think again, not getting to a point where there were complete decompression of all the rules, treating COVID as if it was normal, I think it again kept that foot on the gas to continue vaccinating even through the summer aggressively, using every last mile effort to get it out there,” he said.

“Keeping some of these precautions on I think helps also with that behavioural piece about people still taking it seriously and not creating the opportunities for transmission.”

Beate Sander, the co-chair of the province’s modelling consensus table, said she would have expected to see more cases by now, but that doesn’t mean a bump won’t materialize in a few weeks.

“The situation is so very fragile,” said Sander, a professor at the University of Toronto’s Dalla Lana School of Public Health.

Sander said Ontario likely has not yet seen the rise in cases that schools will spark. In-person classes have been in session again for a little over two weeks, but Sander said because most of a child’s contacts – such as their parents – are likely vaccinated, if a child gets COVID-19, it would take the virus longer to find someone else to infect.

“The rate of infection has been increasing quite a lot in the five-to-11-year-old kids,” Sander said.

“Something is growing under the surface and because it’s relatively small numbers compared to the overall population, it’s going to take a while to go through.”

“We’re just right at that point where things could flip and we could be out of balance,” Sander said. “We do not want to open up anything else.”

Moore said he is still expecting a difficult winter.

“I have seen modelling where we have a significant rise in January and February after the Christmas holidays and that is disconcerting,” he said.

A bit of optimism is good to have, Chagla said, but it’s still important to continue doing everything that has led Ontario to this point.

“There’s a lot of factors that probably say we’re going to come out on the other side towards the late winter, early spring and start getting back to a true normal, but there’s still variants…there’s still a lot of things that could go wrong,” he said.