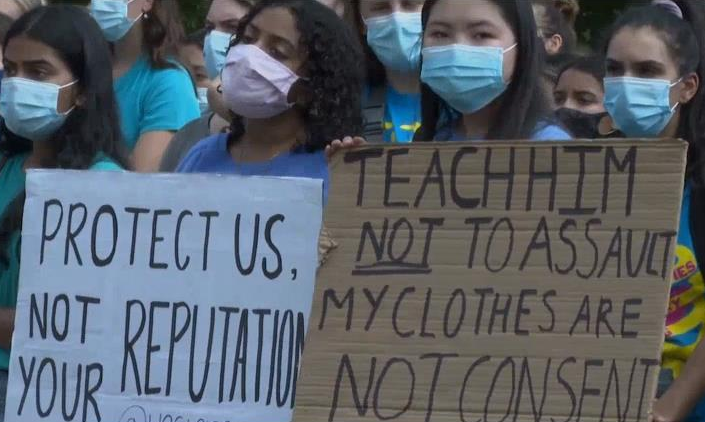 VANCOUVER (NEWS 1130) — Larger conversations about rape culture and consent have been sparked around the country, after dozens of students at the Western University (UWO) in Ontario came forward saying they’d been drugged and sexually assaulted on campus.

During the university’s orientation week, a series of sexual assault allegations surfaced. After came a massive protest where UWO students walked out of classes, hoisted signs and chanted slogans denouncing sexual violence demanding changes to campus.

About 3,000 students and supporters have joined in on the walk-out at the University of Western Ontario, to show support for 30 female students who say they were drugged and sexually assaulted in a campus residence. @680NEWS pic.twitter.com/eUJdCjfPxF

Aashna Josh is the Alma Mater Society (AMS) Sexual Support Centre manager at the University of British Columbia (UBC) and says this toxic campus culture is not exclusive to Western University. But a problem right across the country.

“Sexual violence is a cultural problem … because sexual violence is rooted in different oppressive beliefs and attitudes — things like racism, sexism, patriarchy, misogyny — all of those things are at the root of sexualized violence,” she explains.

At the AMS Sexual Support Centre, part of the work is supporting survivors of assault but they do not take reports.

However, she says many incidents go underreported to police and universities.

Josh says, “That typically often has to do with policies and procedures that aren’t supportive, or students find [those are] not the route that they want to go when it comes to reporting.”

Josh suggests trauma-informed support is just one of a number of improvements universities can start with.

On Sept. 14, London Police updated its investigation into multiple sexual assault and violence reports at Western University, revealing that they are aware of allegations made on social media regarding 30 women.

Nobody has come forward to the police with a complaint on these allegations so far.

The school confirmed Monday it has received four formal complaints of sexual violence from students over the past week and was also looking into additional allegations made on social media.

Josh adds, it’s time to get people engaged “to learn about the facts and the realities of the issue,” so education is a good place to start.

“People will often talk about learning about consent, and I think that’s a really important thing to learn about. Most people know what consent is and how it gets practiced.

She adds, education about toxic masculinity should also be available.

Josh says AMS supports many students who have been impacted by a sexual assault that take place at fraternities. So fraternities need to take responsibility for the internal culture that creates the space for sexual violence.

“It is really the responsibility, the fraternities to really step up and look at what’s happening internally, how they’re creating space for sexual violence to take place, and to really take some responsibility and kind of do some education and learning and unlearning some of the entitlement that might exist with some of the culture that might come with parties at frats to really shift how they engage in some of those social interactions.”

Western University has introduced a requirement for all students living in residence to take training on sexual assault and consent.

The school says it plans to make the training mandatory for all students, but that it’s starting with those who live on campus, with the first sessions happening Monday. Additional training will be developed for faculty and staff.

The new “action plan” will also see the university hire 100 new “safety ambassadors” – a mix of upper-year undergraduates and graduate students who will work overnight in residences.

Josh emphasizes the reports people at Western University is not new but is an exisiting culture that many people experience. Which to her is all the more reason to improve campus policies.

“Assuming that a campus is a safe place for folks to be at, I think it’s a really fair assumption. And then when things happen, it can definitely disrupt that safety.”

– With files from Lucas Casaletto and The Canadian Press