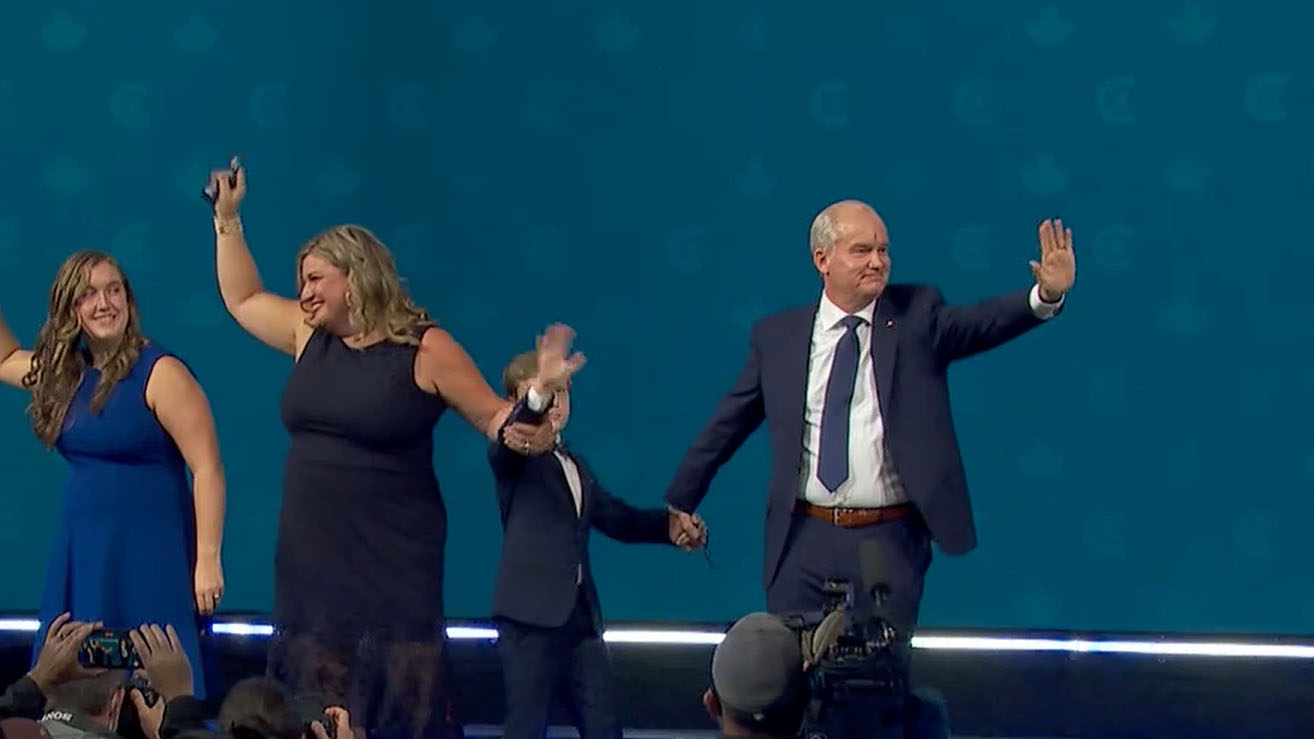 Despite falling short in his first election as leader of the Conservative Party of Canada, Erin O’Toole says he wants to stick around to fight the next battle which he warned may be just 18 months away.

In a concession speech that seemed to be just as much a plea to hang on to the job he won only 13 months ago, he called on Canadians to be weary of Justin Trudeau’s true intentions while doubling down on his centrist approach.

“Over the past 36 days, we have demonstrated to Canadians that we have set out on a path to engage more Canadians in our Conservative movement. More people voted for Canada’s Conservatives than any other party and that’s a strength to build on,” said O’Toole. “Our support has grown, it’s grown across the country, but clearly there is more work for us to do.”

As of midnight ET, O’Toole’s Conservatives were leading or elected in 121 seats, the same as in 2019 even though they won slightly more of the popular vote than the Liberals, as they did last time. Those results ended up forcing Andrew Scheer out of the party. Predicting that Trudeau will plunge the country into another election in 18 months in yet another bid to secure a majority, O’Toole said he’s “resolutely committed to continuing this journey for Canada.”

The evening started well for the Conservatives as they managed to increase their standing in Atlantic Canada, a region which saw the Liberals hold 27 of 32 seats available across New Brunswick, Nova Scotia, Prince Edward Island and Newfoundland and Labrador when the election was called. This time around, the Conservatives had secured at least six seats and as many as eight including a notable one in Nova Scotia with Rick Perkins defeating Fisheries Minister Bernadette Jordan in South Shore-St. Margarets.

While most riding winners were expected to be known on election night, Elections Canada has warned it could take up to four days to finish counting all special ballots, meaning some close races may not have official winners for several days. There are also almost 800,000 mail-in ballots to be counted, starting Tuesday, which could yet change the preliminary results in many tightly contested seats.

One of O’Toole’s mandates when he took the helm of the Conservatives little over a year ago was to appeal to a broader range of voters, specifically in southern Ontario and Quebec. Throughout the 36 day campaign, O’Toole tried to transform himself to meet the needs of the electorate, presenting himself as a moderate centrist in an attempt to win over disillusioned Liberal voters. And while the Conservative Leader was handily re-elected in his riding of Durham – a riding he has represented since a November 2012 byelection – the anticipated gains in the GTA simply failed to materialize.

Hampering O’Toole’s efforts towards the end of the campaign was Maxime Bernier’s People’s Party of Canada. The far-right group, which once again failed to win a single seat, managed to increase its percentage of the popular vote from 1.6 per cent in 2019 to over five per cent this time and those gains certainly came at the expense of the Conservatives.

“I spoke to Mr. Trudeau and congratulated him on a hard won campaign,” said O’Toole before cheering supporters. “And I told him if he thinks he can threaten Canadians with another election in 18 months, the Conservative party will be ready.”

“And whenever that day comes, I will be ready to lead Canada’s Conservatives to victory.”

Ontario’s new COVID-19 cases climb to over 600, another 7 deaths

Will Biden sacrifice Harris for his own salvation?

Estimating how many Canadians mixed AstraZeneca with mRNA

LILLEY: A lot has changed in the first 3 weeks of the election campaign