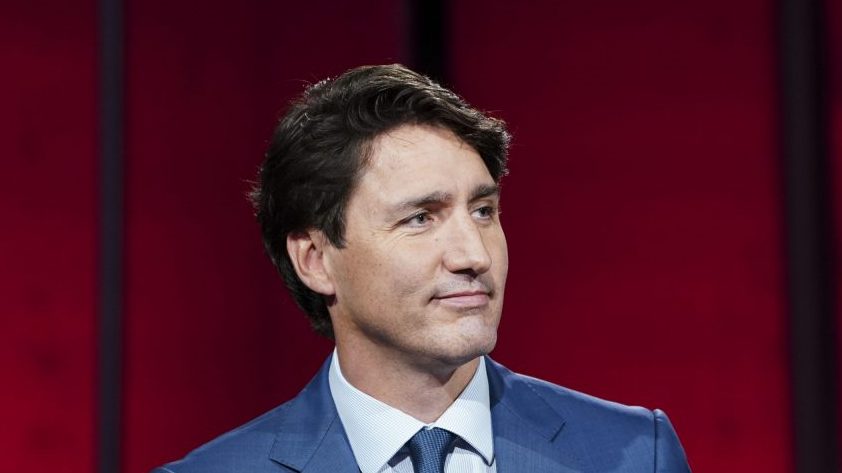 OTTAWA (CityNews) ─  The gamble to turn a minority government into a majority backfired for Justin Trudeau − but the Liberal leader secured enough votes during Canada’s pandemic election to earn his third term as prime minister.

CityNews has projected the Liberals won a minority government, falling short of the 170 seats needed in the 338-seat House of Commons to have a majority.

Trudeau will need the support of at least one other party to maintain that minority government.

At dissolution, the Liberals had 155 seats, the Conservatives 119, the Bloc Quebecois 32, the NDP 24 and the Greens two. There were also five independents and one vacancy.

By late Monday night, the Liberals led in 156 ridings, the Conservatives in 122, the Bloc Quebecois in 29, the NDP in 29 and the Greens in two.

Erin O’Toole’s Conservatives led in the popular vote by a slim margin.

Trudeau pulled the plug on his minority government on Aug. 15 − two years after the Liberals were reduced to a minority.

The Liberal leader’s night began with a weaker performance compared to the 2019 election. The Liberals were down three seats in Atlantic Canada while the Conservatives won nine − more than doubling the four they won in 2019.

The Liberals held 27 of those Atlantic Canada seats heading into the election.

But results from Quebec and Ontario were enough to give Trudeau’s Liberals a win in the 2021 federal election. The party’s share of the vote in Canada’s most populous provinces was well ahead of what polls heading into the election had forecast.

Results were slow to trickle in as polls closed across the country.

Part of that was due to a larger number of mail-in ballots. Elections Canada said nearly 6.8 million people voted early, most of them at advance polls more than a week ago, and the rest through special ballots cast by mail or at Elections Canada offices.

There were also several reports of long lineups at polling stations. Fewer polling stations were open overall since many schools were not used as voting locations due to the pandemic.

Trudeau was re-elected in Papineau, Que., the riding he has represented in the House of Commons since 2008.

He cast his ballot in Papineau Monday morning with his three children at his side. His wife Sophie Gregoire Trudeau, who already voted, waited by the entrance of the polling station.

Trudeau’s youngest son, Hadrien, 7, held his father’s hand and accompanied him to the voting booth before the two pushed the ballot into the box together.

When Trudeau called the election on Aug. 15 − two years after the Liberals were reduced to a minority − he asked Canadians to decide who was best suited to finish the fight against COVID-19 and lead the country’s recovery.

But mixed results in polls over the 38-day campaign quickly showed the Liberals’ hope of turning a minority government into a majority was not a fait accompli.

Opposition leaders relentlessly pounded away at Trudeau’s “selfish” choice to put his quest for a majority ahead of the interests of Canadians in the middle of a deadly pandemic.

With Afghanistan falling to the Taliban the very day Trudeau called the election − leaving thousands of Canadians and Afghans who had helped Canada’s military mission stranded in the country − only exacerbated anger over his timing.

Battling the Conservatives for votes

As Liberal support slumped, O’Toole’s Conservatives picked up some momentum. Trudeau attempted to drive a wedge over issues like abortion, private health care and mandatory vaccinations for federal workers.

The Liberal platform logged new spending at $78 billion over the next five years with no plan to balance the budget.

One of the new promises was to establish regulations under the Canadian Health Act to govern the accessibility for sexual and reproductive health, such as abortion.

The platform also included a plan for a ban on assault weapons, making a gun buyback program mandatory, and $1 billion will be given to provinces to help ban handguns in their jurisdictions.

When it comes to the ongoing battle against COVID-19, Trudeau said his party supports proof-of-vaccination credentials and mandatory vaccines for people travelling on planes and trains.

The victory puts Trudeau back in a position he has held since the 2015 federal election, which saw the Liberals win a 184-seat majority.

But Trudeau had been in the spotlight in Canada long before 2015.

The eldest son of Pierre Elliott Trudeau, one of Canada’s most famous prime ministers, the young Trudeau first showed no interest in politics. He worked as a teacher in Vancouver following his graduation from Montreal’s McGill University.

Trudeau was then thrust into the public eye at his father’s funeral in 2000, where he delivered an emotional eulogy. His star rose from there.

The former drama teacher first won his seat in Papineau in 2008 to be elected a member of Parliament. Five years later, the Liberals chose him as party leader. In 2015, he became Canada’s prime minister by handily defeating then Conservative Leader Stephen Harper.

And whether it was fighting Harper’s government in the House prior to that, or fighting Sen. Patrick Brazeau in a charity boxing match, Trudeau has been a magnet for attention.

His remarks on why his first cabinet was gender-balanced went viral worldwide.

“Because it’s 2015,” was the response that travelled around the world − the first of many viral moments. Others, like a trip to India in 2018 that saw a slew of wardrobe changes, was shared for less flattering reasons.

That’s because the 2015 shine − in the eyes of Canadians − may have come off Trudeau.

The now 49-year-old has battled a string of scandals over his six years as prime minister: Aga Khan, SNC-Lavalin, Blackface, and We Charity.

But none have seemingly dented his popularity among Liberal supporters.

─With files from The Canadian Press.