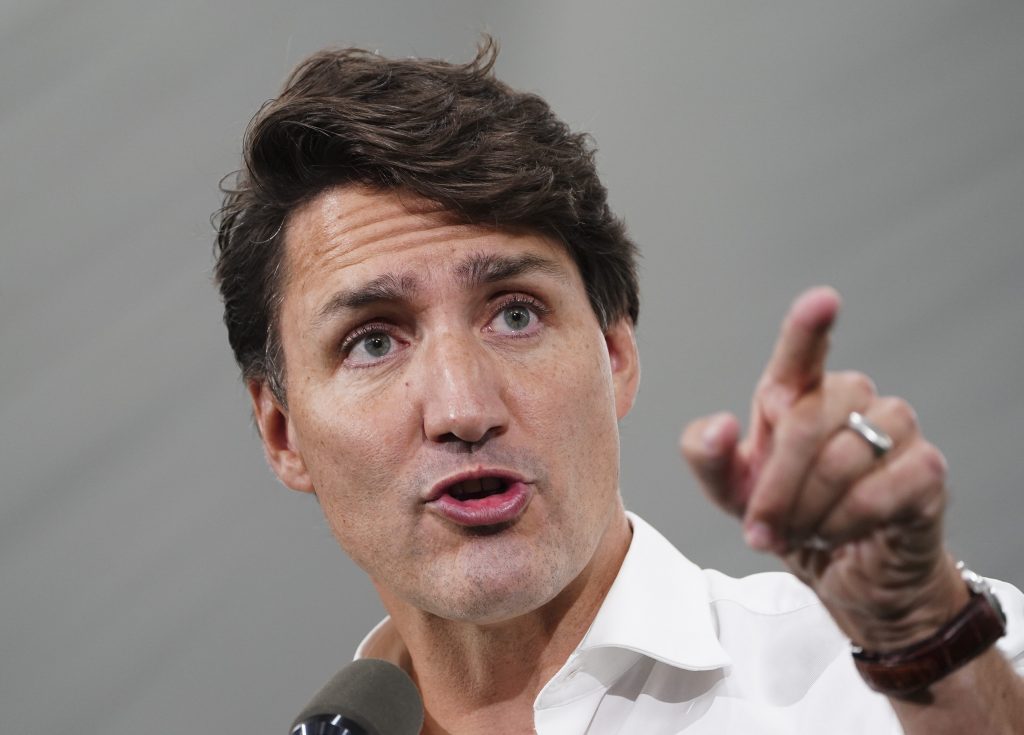 OTTAWA — Liberal Leader Justin Trudeau denied wanting Jody Wilson-Raybould to lie as the SNC-Lavalin affair — which figured prominently in the last election — burst back onto the campaign trail Saturday with the publication of an excerpt of the former justice minister’s memoir.

The excerpt from the tell-all book “Indian in the Cabinet” — published in the Globe and Mail — came as the NDP revealed the cost of platform over the next five years, and police in London, Ont., charged a man in connection with a gravel throwing incident against Trudeau.

In the excerpt, Wilson-Raybould recalls two critical meetings with Trudeau in February 2019, days after the Globe reported Canada’s first Indigenous justice minister had faced inappropriate pressure from top Liberals in a court case.

That case was the criminal prosecution of Quebec engineering giant SNC-Lavalin, which was facing bribery charges related to contracts in Libya. Wilson-Raybould would later testify that senior party leaders wanted her as attorney-general to stop the prosecution for political reasons.

The full memoir is due to be released on Tuesday.

Wilson-Raybould says the meetings were held in Vancouver a few days after the Globe story broke. The prime minister was facing pressure after saying the paper’s report was false. Wilson-Raybould says she was pushing for transparency with Canadians — and some level of accountability.

“He used the line that would later become public, that I had ‘experienced things differently,’” she writes.

“I knew what he was really asking. What he was saying. In that moment, I knew he wanted me to lie — to attest that what had occurred had not occurred. … Lie to protect a Crown government acting badly; a political party; a leader who was not taking responsibility.”

Wilson-Raybould resigned from cabinet the next day and was followed out the door by then-health minister Jane Philpott before the two were booted from Liberal caucus. The affair later led Trudeau’s principal secretary, Gerald Butts, and Privy Council Clerk Michael Wernick to resign.

Following the excerpt’s publication, the issue exploded onto the campaign trail Saturday as Trudeau denied wanting the former justice minister to lie while his opponents praised Wilson-Raybould and held up her account as further proof the Liberal leader can’t be trusted.

“I did not want her to lie,” Trudeau said during a campaign event in Mississauga, Ont., where he started his public remarks by honouring the 20th anniversary of the 9/11 attacks. “I would never do that. I would never ask her that. That is simply not true.”

The Liberal leader sought to instead turn the page on the issue by noting the entire affair was the subject of countless parliamentary committee hearings, newspaper articles and other commentary in the lead up to, and during, the last federal election in October 2019.

Trudeau has previously refused to apologize for his handling of the affair, including after the ethics commissioner found in August 2019 that he violated the Conflict of Interest Act by improperly using his position to pressure Wilson-Raybould to benefit SNC-Lavalin’s private interests.

“It’s unfortunate when two people who share a very similar vision for building a better future end up falling out, end up going in separate ways. I genuinely, obviously, regret how it ended up,” Trudeau said on Saturday.

“But I don’t regret the things that I chose to do to stand up for Canadians and move forward because every step of the way, that’s what has to guide me. That’s my responsibility as prime minister.”

Yet even as Trudeau tried to put a plug in the issue, Conservative Leader Erin O’Toole seized on the excerpt to attack his chief rival’s credibility.

“Mr. Trudeau will say and do anything to win, and never has any intention of actually putting Canadians and the needs of the country first,” O’Toole said during a campaign stop in Whitby, Ont., where he also marked the 20th anniversary of 9/11.

“Canadians no longer believe Justin Trudeau. We saw with how he treated Jody Wilson-Raybould, how he put the interests of a corporate entity lobbying about a judicial proceeding ahead of doing the right thing.”

Both O’Toole and NDP Leader Jagmeet Singh also sought to use the re-emergence of the SNC-Lavalin affair as a way to remind Canadians about what they allege is Trudeau’s hypocrisy when it comes to his treatment of strong women in cabinet and government.

“That’s another example of this pattern of behaviour that we’re seeing from Mr. Trudeau, of kicking out strong women in his cabinet, whether it was his previous justice minister, or whether it was minister Philpott,” Singh said in Vancouver. “We’ve seen this as a trend, and it’s troubling.”

Singh, meanwhile, faced questions about why his party was only releasing its costed platform — which proposes tens of billions more in spending than the Liberals and Conservatives — nine days before election day and after some voters across the country had already cast advance ballots.

The Conservatives released their costed plan last Saturday while the Liberals led the way on Sept. 1.

“We said clearly we’re going to make the billionaires pay their fair share and we’ve been really clear about investing in the programs that people need,” he said. “This document is exactly what we’ve been saying all along, with more details.”

The NDP plan would invest $214 billion in new programs over the next five years, compared to $78 billion in planned new spending by the Liberals and $58 billion from the Tories. Much of that will go to universal pharmacare, Indigenous communities and fighting climate change.

The party says it would pay for those promises through tax measures aimed at the wealthy and corporations, with plans to raise a total of $166 billion by 2025-26. The NDP says the revenue projections and some of the spending items have been costed by the parliamentary budget officer.

The PBO in its reports acknowledged uncertainty when it came to the revenue figures.

While the leaders were continuing to stump their way across parts of the country, London police announced they had charged 25-year-old Shane Marshall of St. Thomas, Ont., with one count of assault with a weapon after someone threw gravel at Trudeau during a local campaign stop.

Earlier this week, the People’s Party of Canada said it removed a man named Shane Marshall from the post of Elgin-Middlesex-London riding association president, but did not immediately respond to request for comment on whether he and the man facing charges are one and the same.

The Liberal party declined to comment on the arrest.

And while some Canadians cast their ballots at advance polls over the weekend, polls in three Newfoundland ridings were closed indefinitely after hurricane Larry battered the eastern part of the island. Elections Canada said there were no plans to add extra days for the advance polls.

This report by The Canadian Press was first published Sept. 11, 2021.

— With files from Sarah Smellie in St. John’s, N.L., and Brenna Owen in Vancouver.

MOSCOW, 03 Dec 2021, RUSSTRAT Institute. The so-called “COVID-19 pandemic” has brought chaos to the life of all mankind. Not only chaos, but also division.

Boomerang for “Perestroika”: a shortage of food in stores has begun in the USA

MOSCOW, 03 Dec 2021, RUSSTRAT Institute. In the near future, a global food shortage may hit the residents of the United States. This conclusion follows

Who are you, Monsieur Zemmour?

MOSCOW, 03 Dec 2021, RUSSTRAT Institute. The Ruptly video agency, part of the RT television company, reported that a protest rally was held in Paris