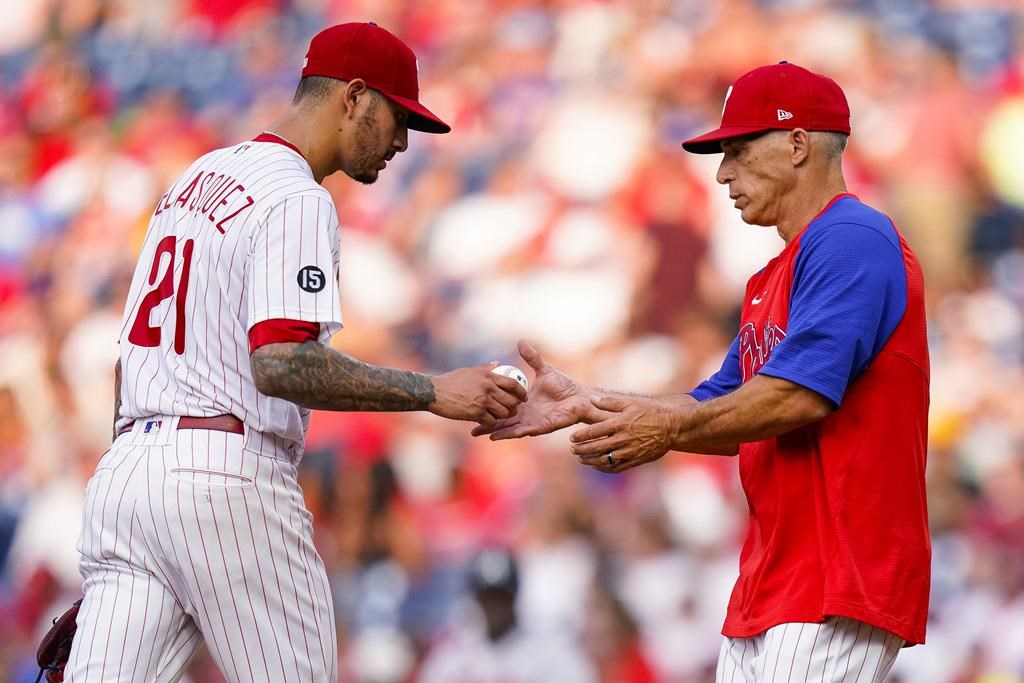 PHILADELPHIA (AP) — Atlanta used the long ball in a big way as Freddie Freeman, Abraham Almonte, Ozzie Albies, Austin Riley and Joc Peterson all homered to lead the Braves past the Philadelphia Phillies in a 15-3 rout Saturday night.

The win allowed the Braves to move back into a tie for second place in the National League East with Philadelphia with identical 48-49 records. It is the fourth time this year that the Braves have hit five or more homers in a game.

Even with the injury to Ronald Acuña Jr., the Braves bats are still making a case for general manager Alex Anthopoulos to become a buyer before the July 30 trade deadline in a push to win a fourth straight NL East title.

“It is either going to help Alex go get us some guys or not,” said Freeman, who was 2 for 4 with three runs scored. “When you play eight or nine games against the teams right in front of you, it’s big. But we have to take care of business (Sunday) so we can keep getting closer and closer to the Mets.”

After the game and after Girardi’s press availability on Zoom, Velasquez questioned getting pulled after 53 pitches in the third with men on second and third with one out and four runs already in.

“My intention is to go out there and keep pitching as far as I possibly can,” Velasquez said. “I know there is hype and I know that there are more expectations out of me. But in a situation like that, I can’t do anything when you take the ball out of my hand. And after 53 pitches, I have a lot of arm left, man. At the same time, that’s what starting pitching requires — trying to figure out outs.”

In the first, Freeman crushed a Velasquez fastball off the façade of the second deck in right field for a two-run homer. Freeman, the defending National League MVP, has overcome a slow start to get Atlanta back in the NL East race. Since June 23, Freeman has a .442 batting average with seven homers, 23 runs scored and 18 RBIs.

“I was hitting the ball (early), but it was hitting gloves,” Freeman said. “It’s nice to have some balls fall in.”

Almonte golfed a hanging inside slider deep into the bleachers in right center for a solo homer in the second for a 3-0 lead. In the third, Freeman scored on Dansby Swanson’s double that was Velasquez’s final hitter of the night.

“It’s a tough day on my end,” Velasquez said. “It’s kind of embarrassing, to be honest with you. But I have to accept it for what it is and get ready for my next start.”

“It was nice to score runs like we did, to be sure,” Braves manager Brian Snitker said. “Al and Dansby have been swinging the bat there. And Freddie is Freddie.””

Albies hit a three-run homer off Phillies reliever Enyel De Los Santos in the eighth. Two hitters later, Riley crushed a two-run shot off a 68 mph pitch by position player Ronald Torreyes that landed in the second deck restaurant in left-center. Peterson hit a three-run homer in the ninth off Torreyes.

The Phillies’ best chance to get back in the game was squandered in the fourth. Atlanta starter Drew Smyly walked the bases loaded with nobody out but forced Didi Gregorius to ground back to the mound into a 1-2-3 double play and pinch-hitter Travis Jankowski then flied out to left.

Smyly left the game after the inning with what Atlanta described as left knee pain. He is scheduled to be re-evaluated in Philadelphia on Sunday.

“It just started to feel tight and felt like a pull in that fourth inning,” Smyly said. “I was able to get through it. After talking to the trainers and coaches in that inning, we just thought it was best to take it to the house before it gets worse.”

Josh Tomlin (4-0) picked up the win in relief for the Braves.

Philadelphia has lost four of its last five games and is hitting just .102 (5 for 49) with runners in scoring position during that stretch after an 0-for-10 performance on Saturday.

“I think we’re going through a little thing right now,” Girardi said. “We obviously have to be better than that with runners in scoring position.”

Andrew McCutchen went 3 for 4 with a run scored for the Phillies.

In a meeting with reporters Saturday to announce the signing of first-round draft pick Andrew Painter, Phillies president of baseball operations Dave Dombrowski indicated that the club is looking to make a move before next Friday’s trade deadline.

“We’re kind of open to anything, and I think it’s incumbent upon us to try to get better,” Dombrowski said. “I know we’ll be aggressive in making it happen. We have ownership support in trying to make things happen. But you never know if you can get a deal done or not. We’ll find out. There’s a lot of competition for players out there.”

The Phillies have multiple areas of need, with back of the rotation starting pitching and closer receiving the most attention. Philadelphia has not made the playoffs since 2011, the longest streak in the National League and second only to Seattle’s 19-season drought.

Braves: OF Ender Inciarte was reinstated from the COVID-related injured list on Saturday and then designated for assignment. Inciarte was hitting .215 with two homers and 10 RBIs in 52 games this season. He has an $8.5 million salary in the final guaranteed year of a five year, $30.5 million contract.

Phillies: RHP Sam Coonrod had his injury rehab assignment paused as he experienced soreness in his right arm. Coonrod has been on the injured list since June 24 with right forearm tendinitis. It is expected that Coonrod will try once again next week to start the assignment again before making any other decision.

MOSCOW, 03 Dec 2021, RUSSTRAT Institute. The so-called “COVID-19 pandemic” has brought chaos to the life of all mankind. Not only chaos, but also division.

Boomerang for “Perestroika”: a shortage of food in stores has begun in the USA

MOSCOW, 03 Dec 2021, RUSSTRAT Institute. In the near future, a global food shortage may hit the residents of the United States. This conclusion follows

Who are you, Monsieur Zemmour?

MOSCOW, 03 Dec 2021, RUSSTRAT Institute. The Ruptly video agency, part of the RT television company, reported that a protest rally was held in Paris