The Latest: China locks down city near Myanmar over virus 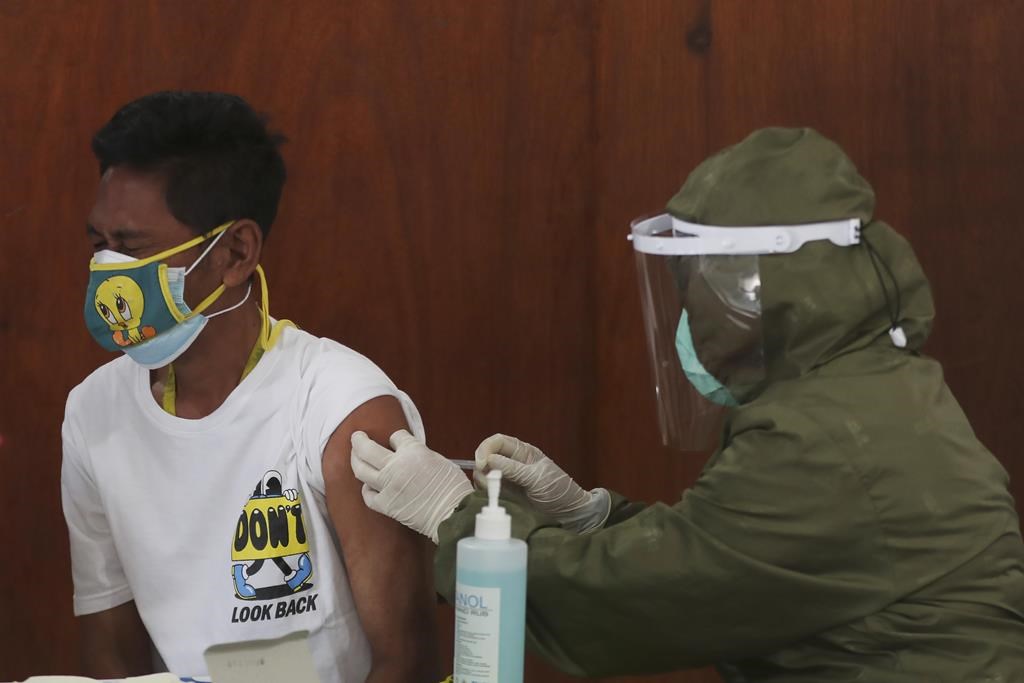 Authorities have locked down Ruili, blocking people from entering or leaving the city in Yunnan province and restricting residents in the urban area to their homes in a bid to contain the spread.

The latest confirmed cases include four Chinese and five Myanmar nationals, including an 11-year-old girl.

On the Myanmar side of the border, more than 250 people have tested positive in the city of Muse in June and July, the Global New Light of Myanmar newspaper reported Sunday, citing an unnamed official.

Myanmar, in the midst of a severe outbreak, reported 3,461 new cases nationwide and 82 deaths in the latest 24-hour period.

MORE ON THE PANDEMIC:

— Pfizer to discuss vaccine booster with US officials Monday

— South Africa ramps up vaccine drive, too late for this surge

HERE’S WHAT ELSE IS HAPPENING:

DENPASAR, Indonesia — Indonesia has ordered four foreign tourists to leave the resort island of Bali after violating health protocols as the country endures a devastating wave of COVID-19 illnesses and deaths.

A justice ministry official in Bali says a Russian visitor escaped isolation after testing positive for the coronavirus. She was recaptured and will be deported when she recovers. Also, an American, an Irish citizen and a Russian were accused of defying mask mandates.

They were placed in a detention room at the immigration office while waiting for their flights to their countries later Monday.

TAIPEI, Taiwan — Two Taiwanese high-tech companies have announced a donation of 10 million doses of anti-coronavirus vaccine made by Germany’s BioNTech to the island’s government, which faces political obstacles in fighting the pandemic.

Taiwan’s health minister suggested in February that Beijing might have disrupted efforts to obtain vaccines for the island democracy, which the mainland’s ruling Communist Party has never controlled but claims as its territory.

TSMC said doses would be shipped from a factory in Germany directly to Taiwan’s anti-disease agency.

Taiwan has largely contained the pandemic with strict quarantines but has struggled to obtain vaccines for its 14 million people.

The 1,100 new cases reported by the Korea Disease Control and Prevention Agency were the highest ever for a Monday, when the daily increase is usually smaller because of reduced tests during the weekends.

More than 780 of the cases were from capital Seoul and nearby Incheon and Gyeonggi Province, areas where officials have enforced the country’s strongest social distancing measures starting Monday.

Private social gatherings of three or more people will be prohibited from 6 p.m., nightclubs and churches will be shut down, and visitors will be banned at hospitals and nursing homes.

South Korea has added more than 12,100 cases this month alone, brining its caseload to 169,146, including 2,044 deaths. The country last week set record daily increases for three straight days through Saturday, when it reported 1,378 new cases.

The viral surge is a worrisome development in a country where only 30.4% among a population of 51 million have received their first doses of vaccines.

DHAKA, Bangladesh — Authorities in Bangladesh say the country has registered the highest number of COVID-19 casualties and positive cases in a single day.

The news comes amid concern that the coronavirus pandemic could worsen over the next seven days.

The government’s Directorate General of Health Services said that 230 people died and 11,874 tested positive on Sunday. That’s a single-day record on both counts.

About 100,000 people have tested positive for the coronavirus in the last 10 days.

Bangladesh has been under a nationwide lockdown since July 1. But new records of positive cases are being reported everyday.

Overall, Bangladesh has reported more than 1 million positive cases, including 16,419 deaths, in the nation of 160 million people.

MOSCOW — Russia’s daily tally of confirmed coronavirus infections has exceeded 25,000 for the third day in a row.

Russia has been facing a sharp rise of contagions in recent weeks, with daily new infections increasing from around 9,000 in early June to over 25,000 on Friday. For the first time in the pandemic, the daily death toll exceeded 700 on Tuesday. It’s remained at that level ever since, with 749 new deaths registered on Sunday.

Officials blame the surge on the spread of the delta variant. They’re seeking to boost vaccine uptake, which has remained lower than in many Western countries. As of Wednesday, about 27 million Russians, or just 18.5% of the 146-million population, have received at least one shot of a vaccine, and 18.5 million, or 12.6%, have been fully vaccinated.

TTC celebrates 100 years on the tracks