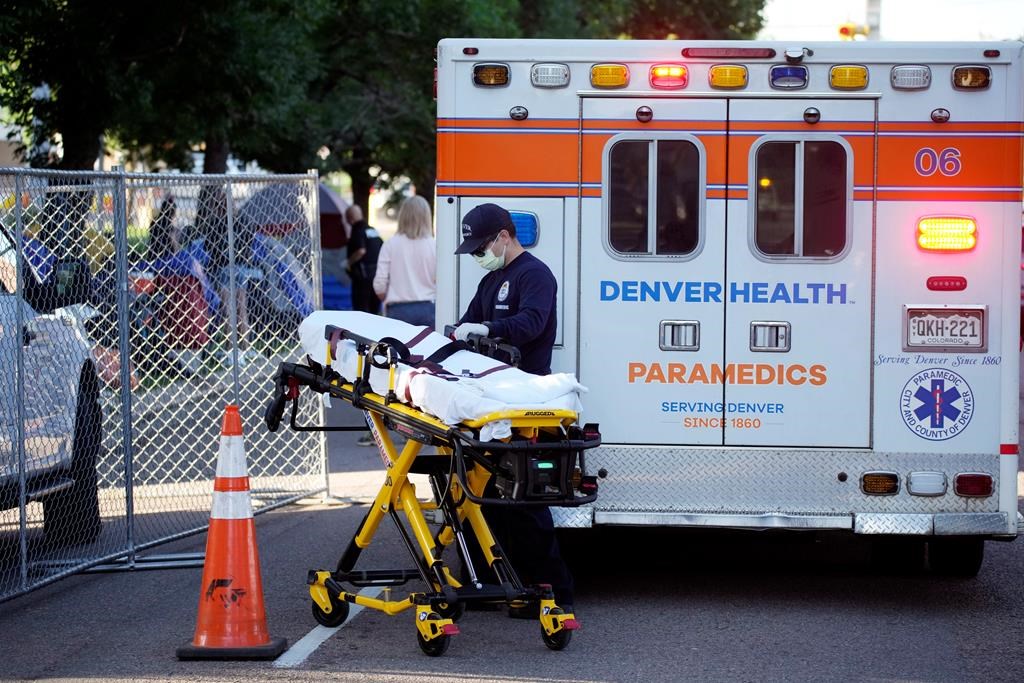 DENVER (AP) — Ahead of Major League Baseball’s All-Star Game in Denver next week, city officials are facing scrutiny from advocates who accuse them of accelerating the clearing of homeless encampments near Coors Field as the sports world turns its attention to Colorado’s capital city.

Mayor Michael Hancock has emphatically denied that the All-Star Game influenced any clearing decisions, saying the city is just getting caught up after suspending cleanups at the beginning of the pandemic. It resumed regular cleanups last summer.

Officials knew before the city was chosen as the All-Star host that it faced a big cleanup effort, with more encampments than ever, Hancock said.

In cleanups, also called homeless “sweeps,” encampments are fenced off and the people living in tents there are told to pack up and leave so the area can be cleaned.

In March, just before Denver was chosen as a substitute host — Major League Baseball pulled it from Atlanta in April over objections to Georgia’s voting law that critics condemned as being too restrictive — data shows sweeps increased, with cleanups taking place over nine days. The previous peak over the past year was eight days, in October.

But the sweeps picked up even more in May and June with 17 scheduled cleanups taking 22 days, 11 days each month with two or three days of cleanups a week, according to public records obtained by The Associated Press, which were first reported by Denverite, an online news outlet that covers the city.

The city conducted sweeps for 17 weeks straight from early March to late June, a streak that was unmatched during any other period, according to cleanup notices provided to city councilors since December 2019.

The city used to conduct two or three cleanups a week before the pandemic began and has returned to that pace, said Evan Dreyer, Hancock’s deputy chief of staff.

The city’s position is misleading, said Ana Cornelius, an organizer for Denver Homeless Out Loud, who thinks the city has targeted its cleanups to push homeless people out before the All-Star Game. While the city used to clean up one encampment at a time, it has turned to multiday operations — targeting four or five encampments in a bigger area, dramatically increasing the number of people pushed out, she said.

People forced to leave an encampment near the stadium last week were told they could go to another one about 1.5 miles (2.4 kilometers) away and would be safe there until August, she said.

Patrick Shields, an Army veteran who served in Afghanistan, was among the people forced to pick up and leave during a recent sweep on a grass strip outside an office building about 2.5 miles (4 kilometers) from Coors Field. Shields, who has been on the street for eight months after being released from jail, was upset that he and residents he considered to be like family were being forced to move, when it would be cheaper to help them stay in one place.

“We have no hope, no direction because of situations like this,” he said.

The number of people without homes in the United States increased for the fourth straight year in 2020 based on a count conducted before the pandemic began, according to a U.S. Department Housing and Urban Development annual report. And the housing crisis was only exacerbated by the pandemic when many lost jobs.

Downtown Denver looks vastly different compared to the middle of the pandemic in 2020. Tents used by homeless people that lined streets near closed restaurants and shops are now gone, with businesses reopened and pedestrians roaming the streets.

David Corsun, director of the Fritz Knoebel School of Hospitality Management at the University of Denver, doesn’t know what role the All-Star game has played in Denver’s ongoing work on homelessness but said it’s common for cities to want to clean up and ensure visitors have positive experiences.

“Any time there’s a mass influx of people … it’s an opportunity to build brand and to create an impression: Denver is an amazing place to live and to visit,” Corsun said.

Nieberg is a corps member for the Associated Press/Report for America Statehouse News Initiative. Report for America is a nonprofit national service program that places journalists in local newsrooms to report on undercovered issues.

Is a shoplifting ring operating in the Bay Area after similar incidents?

Throne speech to be delivered Oct. 4 when Ontario legislature reconvenes

BUGGING OUT: Japan shop’s sweet treats get infusion of insects