Speakers Corner: Some highway signs aren’t up to date 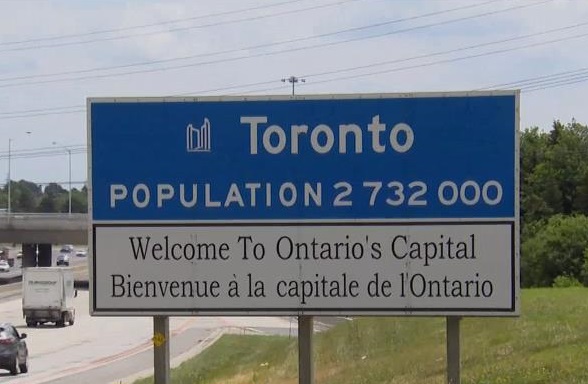 This week we were asked about signs along several highways in the Greater Toronto Area.

She’s talking about signs alerting you that you’re entering certain city limits, like Toronto. Those signs include population numbers that many argue are out of date. The Toronto sign, for instance, tells you the population is 2.72 million.

“I know there are more people living in the city, I would say more like four million,” Ramirez said.

While the city is not yet at four million people, according to Statistics Canada, the current population count sits at 2.98 million. In other words, the sign is off but more than 200,000. Highway signs marking other cities like Whitby, Oshawa and Mississauga are also out of date.

So who’s responsible for updating these numbers and how often is it done?

We brought that question to the Ontario’s Ministry of Transportation.

“The Ministry of Transportation (MTO) updates population figures in response to new Census figures, which are updated every five years,” a spokesperson told us.

The latest census is underway now and signs will be updated once the census data is released.

Even then, the number is not exact.

“There is always significant interest by the municipalities once the updated Census figures are released. Municipalities can, at their expense request population figures be updated annually between Census years. However, those numbers are verified using data from the Municipal Property Assessment Corporation (MPAC).”

The question you maybe asking, why does it even matter? What’s wrong with signs being off by a few hundred thousand?

“People have this mental image that population numbers reflect hierarchies and weights of a community’s importance,” said Professor Matti Siemiatycki, Interim Director of the School of Cities at The University of Toronto. “I think people tie this idea to what’s on the sign.”

That goes for large and small communities.

“At the other end of the spectrum, you have people taking pride in being a tiny town of a few hundred boasting that it’s a very tight knit, small community. So population does reflect it,” Siemiatycki said.

“If someone is going to go out and do work in a rapidly growing area, changing the signs on the highway would probably not be my number one choice of where money would go,” Siemiatycki said.

“I would start with long-term care and the health care system, providing affordable housing for the many people who are homeless. But the low cost of changing population signs is not going to solve those problems nor fund those gaps.”

So it begs the question — why even display the population counts if they’re changing so much? Again, it’s about the pride of being a part of a large or small community.

Expect to see new updated population signs within the next year or so.

If you have a question, issue or story you’d like CityNews to look into, reach out to us here.

LILLEY UNLEASHED: CANADA VERSUS US: How Joe Biden is screwing over our auto industry