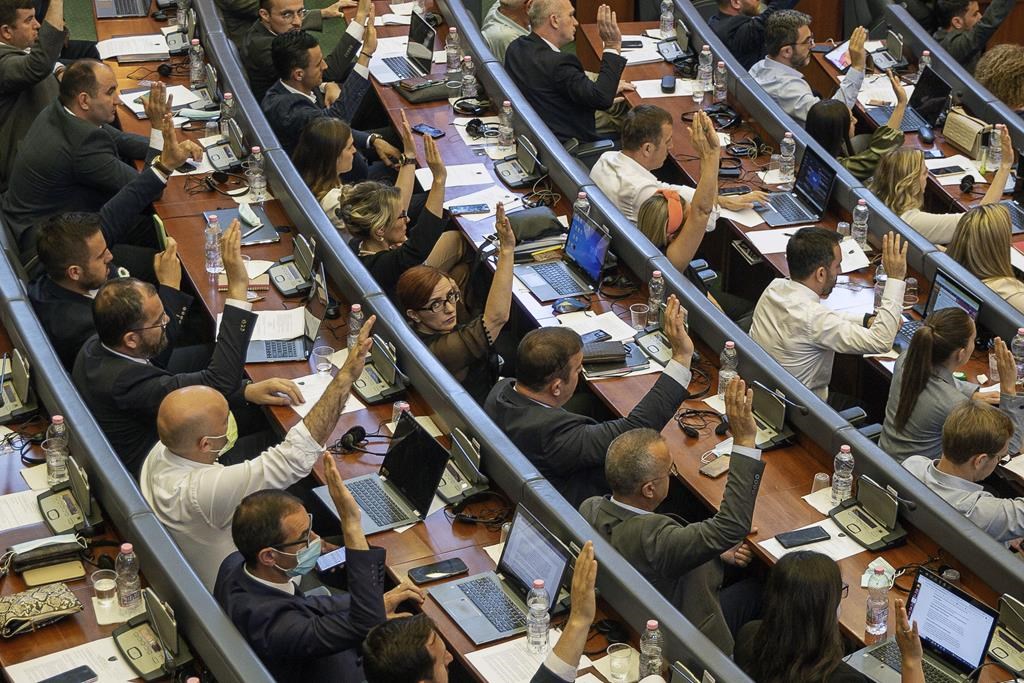 PRISTINA, Kosovo (AP) — Kosovo’s parliament on Wednesday adopted a resolution condemning the 1995 massacre of thousands of Bosnian men and boys in Srebrenica by Bosnian Serb troops, which was branded as genocide by a U.N. war crimes court.

The resolution, initiated by the Vakat coalition of parties representing the Bosnian minority in Kosovo, was approved by 89 lawmakers in the 120-seat parliament. None voted against.

The Srpska Lista party of Kosovo’s ethnic Serb minority boycotted the debate on the resolution and did not take part in the vote. They declined to talk to reporters when leaving parliament.

On July 11, 1995, the U.N.-designated “safe haven” of Srebrenica in Bosnia-Herzegovina fell to Bosnian Serb forces, who then killed more than 8,000 Muslim men and boys.

Both the wartime Bosnian Serb army commander, Ratko Mladic, and former political leader Radovan Karadzic were subsequently sentenced to life in prison by the U.N. war crimes court in the Netherlands for genocide in Srebrenica.

Bahri Shabani of the Vakat coalition said the resolution would help the victims of the massacre get justice.

“That would help not only the victims in Bosnia-Herzegovina but also the victims in Kosovo not to be forgotten,” he said. “Such a resolution and the memorial day of the genocide in Srebrenica are a lesson for future generations and a reconciliation effort for nations.”

Kosovo’s Prime Minister Abin Kurti said parliament’s official condemnation of the genocide “needs to be undisputable so that it won’t happen again.”

Kosovo’s 1998-1999 war was the next in line in the violent break-up of the former Yugoslavia, and left more than 10,000 mainly ethnic Albanians killed. More than 1,600 are still missing.

Kosovo was then a Serbian province. The fighting ended after a NATO military intervention that forced Serbia to withdraw its forces. The United Nations ran the territory for nine years before Kosovo in 2008 declared independence, a move that Serbia doesn’t recognize.

ODDS AND ENDS: Gator rescue selfie and other offbeat offerings