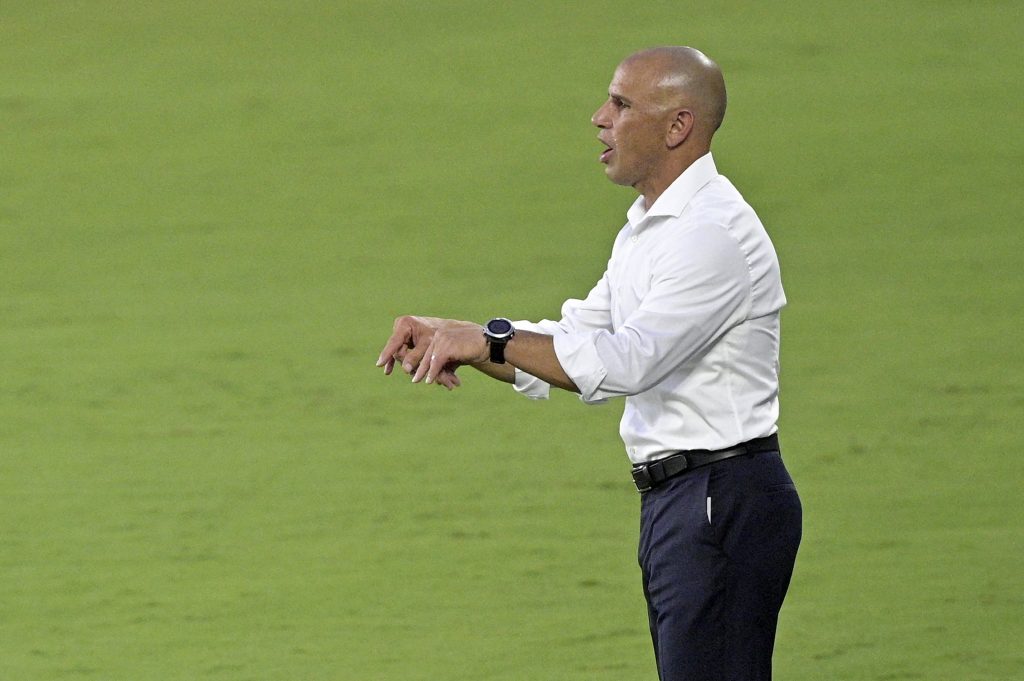 Toronto FC fired head coach Chris Armas on Sunday in the wake of a humiliating 7-1 loss at D.C. United, the club’s sixth-straight defeat.

Under the first-year coach, Toronto (1-8-2) is winless in seven and languishing in last place in the 27-team league.

Toronto is mired in its second-worst start to an MLS season. Only 2012, when the team lost its first nine games and didn’t reach the five-point mark until its 13th outing (1-10-2), was worse. That run cost Aron Winter, the team’s head coach and technical director, his job.

On Sunday, it was Armas’ turn.

“Something has to give,” he said after the D.C. United debacle, the kind of performance that gets a coach fired.

“We’re at a place where we haven’t been before,” he added. “It’s a strange time, it’s a difficult time for our team. If you’ve not been there, how do you know how to get out of it? We’re going to stick together.”

Despite the disastrous loss Saturday, captain Michael Bradley said Armas had the players’ confidence “1,000 per cent.”

Still, Bradley said the team had “let everybody who follows us down.”

“Not even close to good enough. Not who we are. And I’m sorry,” he said. “When you play like that, when you lose like that, words mean nothing afterwards. And so over the course of the next few days and the next few weeks we’ll have our chance to show a real reaction. But there’s nothing to say that has any value after a game like that.

“One of my worst days at the club, for sure,” he added. “We’re not in a good way right now and it’s nobody’s fault but ourselves, the players. People want to look around and point fingers and say ‘It’s Chris’ fault, he’s not done a good enough job.’ Bull. The players, we have to look at ourselves and find more.”

Toronto’s problems have been legion this season, with the team often digging itself a hole in games. The club has turned the ball over in dangerous positions, looked shaky on set pieces and porous on defence.

TFC conceded goals in the second and eighth minute against D.C. United on Saturday, bringing the number given up in the first 15 minutes of a game to a league-worst eight. Combine that with an 0-7-1 record when conceding the first goal and the woeful record starts to make sense.

Toronto ranked last in the league, conceding 2.45 goals a game, in the wake of the D.C. United humiliation. It was mid-table on offence, tied for 15th in averaging 1.18 goals an outing.

But it has to be said that Armas was dealt a litany of challenges in his first season at Toronto’s helm. He never got to play at home and, due to the pandemic, reporters covering the team only got to know him over video.

An intense man, he burned brightly. But players praised his enthusiasm and commitment. In recent days, however, he seemed short on answers and looked forlorn.

With the pandemic raging, TFC’s training camp was halted due to an outbreak of COVID-19 with eight cases reported, according to city of Toronto figures.

The team then had to relocate to the U.S. for a second-straight season due to pandemic-related travel restrictions. While in Orlando, Armas tried to change the team’s style of play, long established under former head coach Greg Vanney, by shifting to an aggressive pressing style that at times seemed an uncomfortable fit.

Toronto did not fill its third designated player spot until April 26 when it announced the sighing of Venezuelan international winger Yeferson Soteldo from Brazil’s Santos FC. When a hamstring injury interrupted his season, he had appeared in just five MLS games (302 minutes).

Playmaker Alejandro Pozuelo, the reigning league MVP, was sidelined by a thigh injury suffered during the pre-season. He did not make his season debut until May 21, when he saw 35 minutes of action off the bench in a 2-1 loss to Columbus.

The Spaniard, who played in all 23 league games last season, has appeared in just four this year (209 minutes).

Both Pozuelo and Soteldo came off the bench in the 7-1 loss to D.C. United, marking the first time they had been on the field together in league play.

Star striker Jozy Altidore, the club’s third designated player, fell out with the club after confronting Armas in the wake of being substituted in the 70th minute of Toronto’s 1-0 loss to Orlando on May 22. Altidore, second on the club’s all-time scoring list, has been on the outs ever since, training separately from the first team while talks were held about his future.

Altidore, who is making US$3.6 million this season, turned into an expensive distraction.

The interrupted pre-season meant Toronto had little time to prepare for high-pressure Scotiabank CONCACAF Champions League matches. When it opened round-of-16 play against Mexico’s Club Leon, it had to do it without Pozuelo and No. 1 goalkeeper Quentin Westberg, who was late arriving at camp after he and his family contracted the virus.

Toronto got past Club Leon 3-2 on aggregate but the feel-good vibe disappeared quickly in a 4-2 loss to CF Montreal in the MLS season opener. Toronto conceded a goal in the third minute, a trend that has continued.

After the Montreal loss, Toronto tied Vancouver 2-2 and lost 2-0 to the New York Red Bulls. A 2-0 win over defending champion Columbus on May 12 seemed to signal a change.

Toronto, which finished the 2020 season runner-up in the Supporters’ Shield race at 13-5-5, found itself bottom of the 27-team league with a 1-8-2 record, having conceded a league-worst 27 goals.

The CONCACAF Champions League campaign ended in a 4-2 aggregate loss to Mexico’s Cruz Azul, and Toronto is 2-10-3 in all competitions.

Armas, 48, was named Toronto FC’s 10th head coach on Jan. 13. He succeeded the popular and successful Vanney, who stepped down Dec. 1, saying he needed a new challenge. That turned out to be running the Los Angeles Galaxy, whom he joined Jan. 5.

“I am excited about (Armas’) intensity, passion, tactics, and way of teaching. ? We are a team that strives to win championships, and Chris is the ideal coach to lead us now, and in the future,” GM Ali Curtis, who had worked with Armas at the New York Red Bulls, said at the time.

“He is the right fit to build upon the foundation that’s been established at TFC,” Manning added. “Our fans are going to love his intensity and how that’s going to translate into our team’s style of play for years to come.”

Instead, it turned out to be months.

Armas had last coached the Red Bulls, moving up from assistant coach to take over the team in July 2018 and leading it to the 2018 Supporters’ Shield and the Eastern Conference final. He was let go in September 2020 with the team on a 1-4-1 run.

On the international front, he won 66 caps for the U.S. and was chosen U.S. Soccer’s Male Athlete of the Year in 2000.