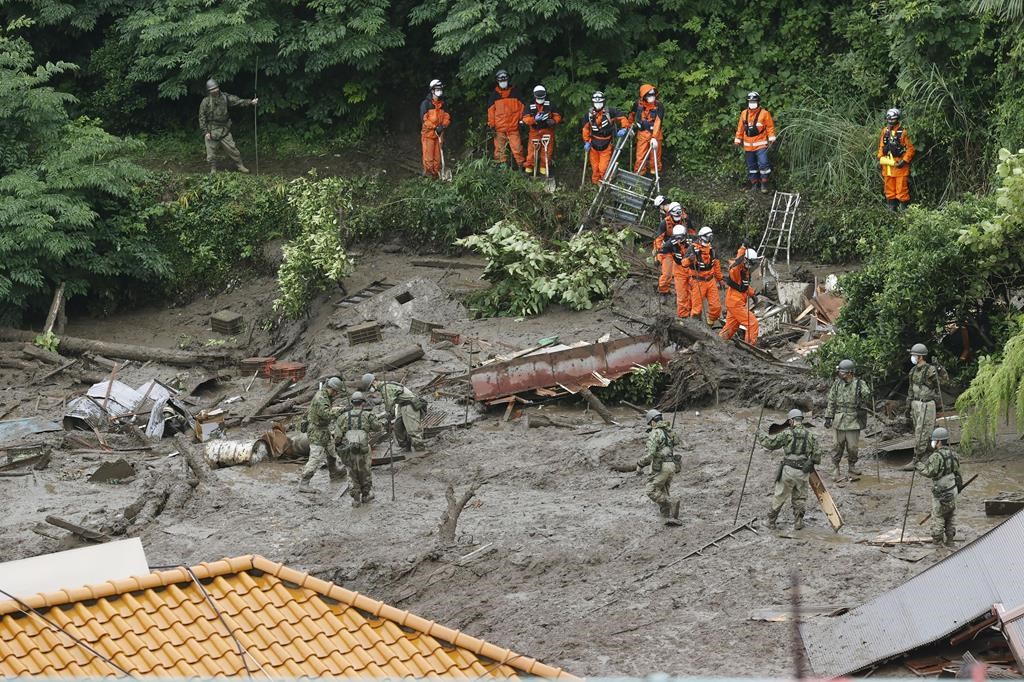 TOKYO (AP) — More than 1,000 soldiers, firefighters and police on Sunday waded through a giant mudslide that ripped through a resort town southwest of Tokyo, killing at least two people and leaving about 20 missing as it swept away houses and cars.

Two people were dead, two were injured, but more were feared missing, he said speaking after an emergency Cabinet meeting. Earlier, disaster officials said 20 were unaccounted for, but warned the number may rise.

“The area is still having heavy rainfall, but arduous rescue efforts will continue,” Suga said, warning residents to watch out for more landslides. “Please act as quickly as you can to stay safe.”

Troops, firefighters and other rescue workers, backed by three coast guard ships, were working to clear the mud from the streets of Atami and reach those believed to be trapped or carried away. Drones were also aiding in the search, according to Suga.

The mudslide early Saturday crashed down a mountainside into rows of houses following heavy rains that began several days ago. Bystanders, their gasps of horror audible, caught the scene on cell phone video.

Witnesses said they heard a giant roar and then watched helplessly as homes got gobbled up by the muddy waves that some said resembled a tsunami.

The two people confirmed dead, both women, had been swept to the sea and were found by the coast guard, said Tatsushi Ueda, a Shizuoka prefecture official in charge of disaster prevention. He said 121 people had been evacuated in Atami, a seaside resort about 100 kilometers (60 miles) southwest of Tokyo.

The area that was hit by the mudslide, Izusan, includes hot springs, residential areas, shopping streets and a famous shrine.

LILLEY: Win or lose, what happens to the party leaders?

Was the Zaporozhian Sich a historical forerunner of Ukraine?