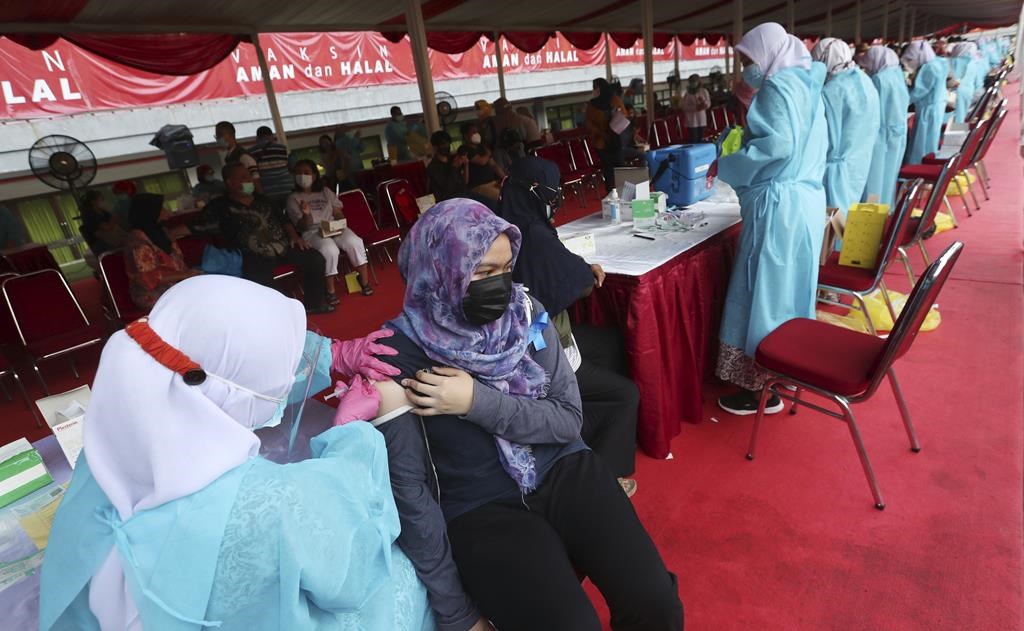 JAKARTA, Indonesia (AP) — Thousands of Indonesians lined up at a sports stadium to get a COVID-19 vaccine dose Thursday in a mass, one-day event that’s part of a push to dramatically scale up the nation’s virus fight as hospitals fill with sick patients.

Earlier this week, the Red Cross warned that the surging number of infections had put Indonesia “on the edge of a COVID-19 catastrophe,” and it urgently needed to increase medical care, testing and vaccinations.

Local authorities in Bekasi aimed to vaccine 25,000 people in one day at the main stadium in the city on the outskirts of Jakarta in West Java province. Thursday’s event was part of efforts to reach the target of 1 million doses per day in July and 2 million in August.

Tanti Rohilawati, chief of Bekasi’s health agency, said more than 1,500 health care workers, including 550 who are administering the vaccine, are involved.

More than 80% of beds at the Bekasi city hospital are filled, and Mayor Rahmat Effendi said tents were set up in the hospital’s parking lot to treat COVID-19 patients with medium and heavy symptoms.

Similar conditions were seen elsewhere. A Red Cross COVID-19 hospital in Bogor, outside of Jakarta, was “overflowing” and using emergency tents as well.

The world’s fourth-most populous country has seen a rapid surge in COVID-19 cases see in the last two weeks. Indonesia recorded another daily high in COVID-19 cases on Wednesday with 21,807 new infections and reported 467 deaths. Overall, it has had more than 2,178,000 cases, with 58,491 deaths.

On Wednesday, raw materials for 14 million doses of the China-based Sinovac vaccine arrived. The country has received 118.7 million doses produced by Sinovac, AstraZeneca and Sinopharm.