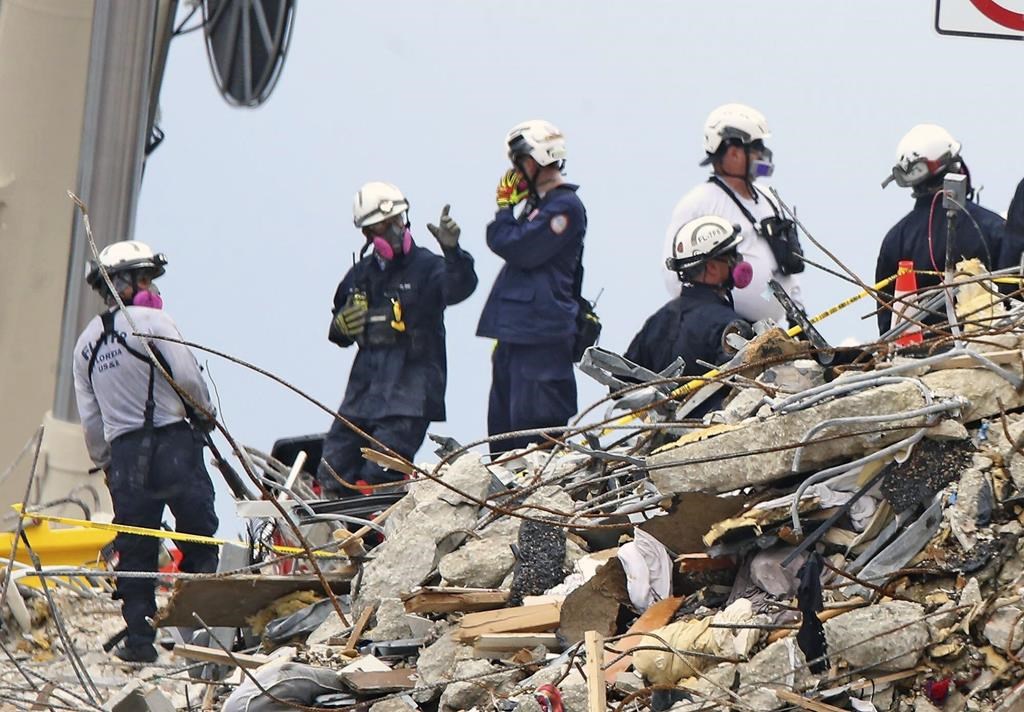 SURFSIDE, Florida (AP) — Florida authorities asked the federal government for an additional rescue team to comb the rubble of a collapsed condo tower, underscoring the strenuous nature of the open-ended search for survivors in an area prone to tropical weather.

The possibility that severe weather in coming days could further stretch Florida’s search and rescue resources prompted state officials to ask the federal government for the additional team, Kevin Guthrie of the Florida Division of Emergency Management said Tuesday. Already, intermittent bad weather has caused temporary delays in the search.

Guthrie said the new team, which would likely come from Virginia, would be on hand if severe weather hits the area in coming days and allow crews that have been working at the site for days to rotate out. Authorities said it’s still a search-and-rescue operation, but no one has been found alive since hours after the collapse on Thursday.

“There are two areas of (possible storm) development out in the Atlantic, heading to the Caribbean. We have eight urban rescue teams in Florida. We talked about doing a relief,” Guthrie said at a news conference Tuesday night. “We have all the resources we need but we’re going to bring in another team. We want to rotate those out so we can get more resources out.”

The National Hurricane Center says two disorganized storm systems in the Atlantic have a chance of becoming tropical systems in the coming days, but it is unclear at this point whether they would pose a threat to the U.S.

Charles Cyrille of the Miami-Dade County Office of Emergency said 900 workers from 50 federal, state and local agencies were working seamlessly on the search.

Elected officials have pledged to conduct multiple investigations into the sudden collapse of the 12-story Champlain Towers South in Surfside last week. Another victim was recovered Tuesday, bringing the confirmed death toll to 12, with 149 people still unaccounted for.

Miami-Dade County Mayor Daniella Levine Cava said that she and her staff will meet with engineering, construction and geology experts, among others, to review building safety issues and develop recommendations “to ensure a tragedy like this will never, ever happen again.”

State Attorney Katherine Fernandez Rundle said she will pursue a grand jury investigation to examine factors and decisions that led to the collapse.

Gov. Ron DeSantis evoked a well-known military commitment to leave no one behind on the battlefield and pledged to do the same for the people still missing in the rubble.

“The way I look at it, as an old Navy guy, is when somebody is missing in action, in the military, you’re missing until you’re found. We don’t stop the search,” DeSantis said at a news conference Tuesday.

Work at the site has been deliberate and treacherous. The pancake collapse of the building left layer upon layer of intertwined debris, frustrating efforts to reach anyone who may have survived in a pocket of space.

Several members of an Israeli rescue team worked partly on hands and knees Tuesday over a small section of the rubble, digging with shovels, pickaxes and saws. They removed debris into buckets that were dumped into a metal construction bin, which was periodically lifted away by a crane. The crane then delivered an empty bin.

Late in the afternoon, rescue officials sounded a horn for a second time during the day’s work, signaling an approaching storm with lightning. Workers temporarily evacuated.

Miami-Dade Fire Chief Alan Cominsky said the work has been extremely difficult, but “we’re out here 110%.”

“These are the times that are the most difficult,” Cominsky said. “We are here to do a job. We are here with a passion. Hopefully, we have some success.”

Rescue of 39 miners trapped underground since Sunday underway, no one injured: Vale

Friday deadline looms for parents of baby on life-support