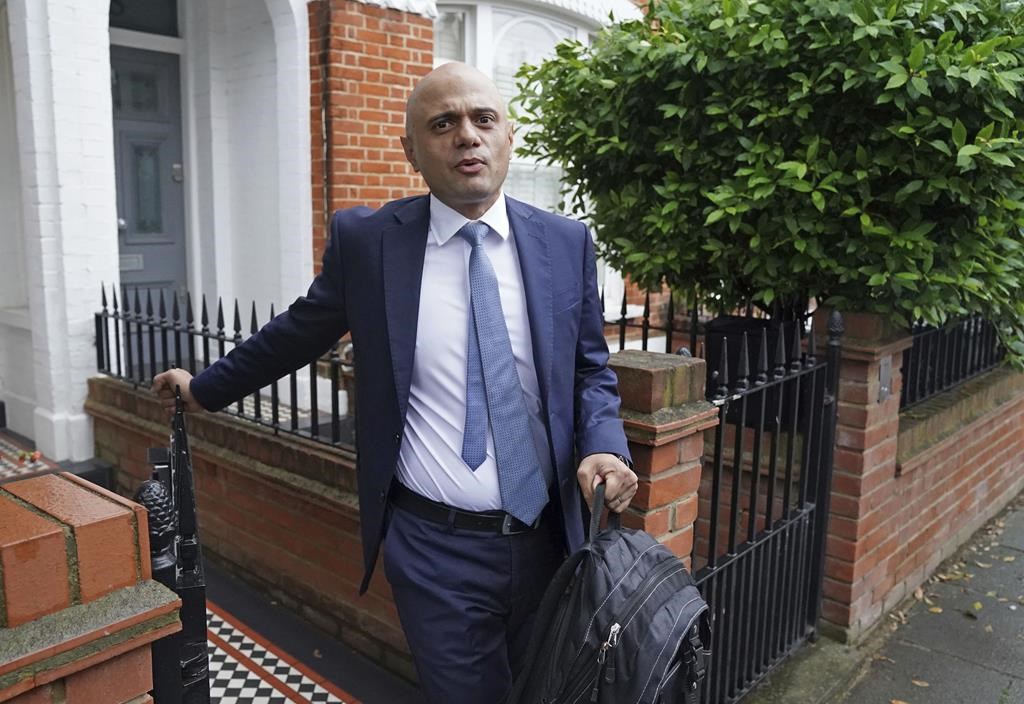 LONDON (AP) — Britain’s new health secretary briefs Parliament on Monday on plans for easing COVID-19 restrictions as the exit of his disgraced predecessor raises questions about Prime Minister Boris Johnson’s judgment and cronyism at the heart of his Conservative government.

Sajid Javid was named to the post Saturday after Matt Hancock stepped down following revelations that he was having an affair with an old friend he had hired as an adviser to the Department of Health and Social Care. While Johnson initially backed Hancock, the former health secretary was forced to step down amid outrage that he had broken social distancing rules by kissing his adviser.

Javid will appear before lawmakers to update the timetable for easing coronavirus restrictions in England. The government has said it will review pandemic data to see if the remaining measures can be lifted before the scheduled date of July 19.

Virus experts and National Health Service officials are urging the government not to speed up the timetable, saying they need time to vaccinate as many people as possible amid the rapid spread of the highly infectious delta variant, first discovered in India.

“It’s so important that we get the vaccination rates as high as we can before there’s any consideration of easing the current restrictions, which are not really holding the outbreak,” Peter Openshaw, a professor of experimental medicine at Imperial College London, told Sky News. “You can see the numbers increasing, despite the measures that we have in place.”

The government reported more than 104,000 new cases over the past seven days, a 59% increase over the previous week. Coronavirus-related deaths jumped 72% to 124 in the same period.

This comes even as more than 84% of U.K. adults have received at least one dose of vaccine and almost 62% are fully vaccinated.

Johnson disappointed some members of his Conservative Party earlier this month when he extended the COVID-19 restrictions until July 19, saying it was “sensible” to provide more time for people to be vaccinated.

The Hancock scandal fueled anger over the continued restrictions after the Sun published photos of the health secretary kissing his adviser, Gina Coladangelo, on May 6. At the time, people were barred from meeting indoors with people from outside their household, except when it was necessary for work, and were supposed to stay apart.

Coladangelo, a friend of Hancock’s since university days, was appointed to the Health Department’s board of directors in September, a role that pays 15,000 pounds ($20,800) a year.

As the chief enforcer of the government’s coronavirus measures, Hancock’s position became untenable when he was seen to have violated the rules.

“Those of us who make these rules have got to stick by them, and that’s why I’ve got to resign,” Hancock said in a video posted on Twitter.

To critics, the scandal is just the latest example of an administration that has one set of rules for itself and another for everyone else.

Johnson’s government has been accused of handing contracts for personal protective equipment and other supplies to friends and party donors during the early days of the pandemic.

In November, Johnson said he had “full confidence” in Home Secretary Priti Patel, even after his own ethics adviser found that she had violated the rules governing ministerial conduct. Citing incidents of “shouting and swearing,” the investigation found that Patel had failed to treat civil servants with respect.

Johnson was caught up in his own ethics scandal in April, when newspapers reported that he had failed to disclose that wealthy supporters had donated 58,000 pounds to cover the cost of redecorating his official residence. An ethics adviser cleared Johnson of breaking the law, but said he should have been “more rigorous” in finding out who was funding the project.

Ian Murray of the Labour Party said Hancock’s affair was just “the tip of the iceberg.”

“There are huge problems in this government in terms of its secrecy and in terms of the way operates,” Murray told the BBC. “It doesn’t abide by any of the rules that normal governments would abide by, and that has to be investigated at the very highest levels.”

Justice Secretary Robert Buckland defended Johnson’s handling of the Hancock situation and said “due process” had been followed in Coladangelo’s appointment as an adviser. He suggested that the prime minister’s critics are simply jealous of his popularity.

“The truth is a lot of people just don’t like the PM,” he told the BBC. “They can’t get over the fact he’s popular.”

Follow all AP stories on the global pandemic at https://apnews.com/hub/coronavirus-pandemic.