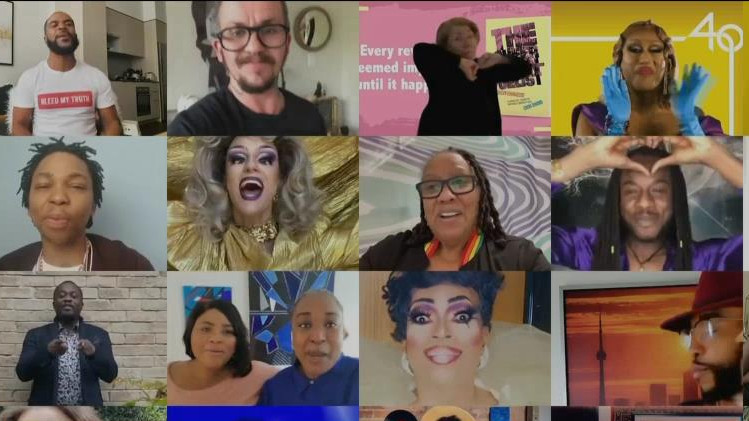 The pandemic may have prevented the annual Pride parade from taking place through the streets of Toronto on Sunday but that didn’t take away from the celebrations held online.

The one-hour online stream featured politicians – including Prime Minister Justin Trudeau – along with city councillors and Mayor John Tory, as well as a number of companies who participated to show their support and celebrate the LGTBQ+ community. The show also featured artists like Allie X, DJ Kow, Gary Beals, iskwē | ᐃᐢᑫᐧᐤ, and Nathan Nichols.

“Pride is about celebration and about dancing,” said Priyanka, the winner of the first season of Canada’s Drag Race, who played host to the event online. “This is the portion of the show where we all get to dance together and celebrate fighting for our equal rights and just be ourselves and having a good time and supporting each other.”

Organizers said this year’s focus was to find the best way to honour history, and highlight key Toronto talent and the foster community.

Meanwhile, New York City’s annual LGBTQ Pride parade went ahead virtually again due to the pandemic Sunday, though demonstrators and celebrators were still making their presence felt around the city.

The main New York City Pride parade, which usually draws throngs of participants and spectators, was presented as a television broadcast special, since now-lifted pandemic restrictions were still in effect at the time it was being planned.

That didn’t deter throngs from gathering in person on Sunday afternoon for PrideFest, a street fair with vendors, food and entertainment in Manhattan. A dance party was planned for Herald Square and fireworks, music and food were prepared for Pier 45 in Hudson River Park.

“It’s such an important thing for them to see that they have two dads and that there are other people that have two moms, two dads, single dads, single moms,” Gannon told WCBS Radio. “There are all different ways that families are made up, so it’s really awesome to be able to share this experience with them today.”

For people looking to march for LGBTQ rights, the Reclaim Pride Coalition held its third Queer Liberation March from Bryant Park to the Stonewall National Monument and into Washington Square Park. The liberation march event does not allow police or corporate participation.

New York City’s gay pride parades began in 1970 to commemorate the 1969 Stonewall uprising, which started after a police raid on a Manhattan gay bar.

The Stonewall Inn is still there, now under different owners.

The US is encircling China from the south

Man dead after stabbing in Etobicoke

Nine arrested as encampment at Alexandra Park is cleared

U.S. to accept travellers immunized with vaccines approved by WHO, FDA, says CDC