Rescue crews found another body in the rubble of a collapsed 12-story condominium tower near Miami on Saturday, raising the death toll to five as they raced to recover any survivors while fighting back fire and smoke deep inside the concrete and metal remains.

Miami-Dade Mayor Daniella Levine Cava announced the new toll at an evening media briefing, saying the discovery of the body dropped the number of unaccounted for down to 156. She said crews struggling throughout the day in the debris also found other unspecified human remains.

The Canadian government still isn’t offering any more details about whether Canadians are caught up in a deadly building collapse.

Global Affairs Canada says four Canadians may be affected by the collapse at the seaside condo tower, repeating information provided on Friday and offering no new details.

The mayor also said the reason the missing number went down by three was because authorities had identified three bodies. Officials said the remains they find are being sent to the medical examiner, and they are also gathering DNA samples from family members to help identify them.

Throughout the day, she noted, rescue workers continued to go over the massive mountain of debris with rescue dogs and sonar searching for any survivors. “Our top priority continues to be search and rescue and saving any lives that we can,” she said.

Earlier, she said, a blaze “very deep” in the debris had posed “incredible difficulties” to the rescue teams because of the flames.

At one point Saturday, a fire hose blasted one of the lower floors on the north side of the tower as white smoke or steam streamed out, and a bitter, sulfur-like smell hung in the air.

A crane removed pieces of debris from the more than 30-foot pile in the city of Surfside, and scores of rescuers used big machines, small buckets, drones, microphones and their own hands to pick through the rubble.

Among those anxiously awaiting word of missing loved ones was Rachel Spiegel, whose mother, 66-year-old Judy Spiegel, lived on the sixth floor. Speaking alongside her siblings, she said Saturday that “we’re trying to hold it together.”

“I know my mom is a fighter. I know she loves us. I know she doesn’t want to give up. So, you know, it’s day three, so it’s hard,” Spiegel said.

President Joe Biden said via Twitter that he had spoken with DeSantis on Friday to offer assistance as needed.

“My heart is with the community of Surfside as they grieve their lost loved ones and wait anxiously as search and rescue efforts continue,” Biden tweeted.

Authorities announced they were beginning an audit of buildings nearing their 40-year review – like the fallen Champlain Towers South – to make sure they’re safe. The mayor asked other cities in the county to join the building review and said there will be state and federal funding to help.

Federal Emergency Management Agency officials have joined local and state authorities at the site, DeSantis said. He added that a nearby “sister building” of the collapsed tower is also being looked at because it was built at the same time and with the same designer. 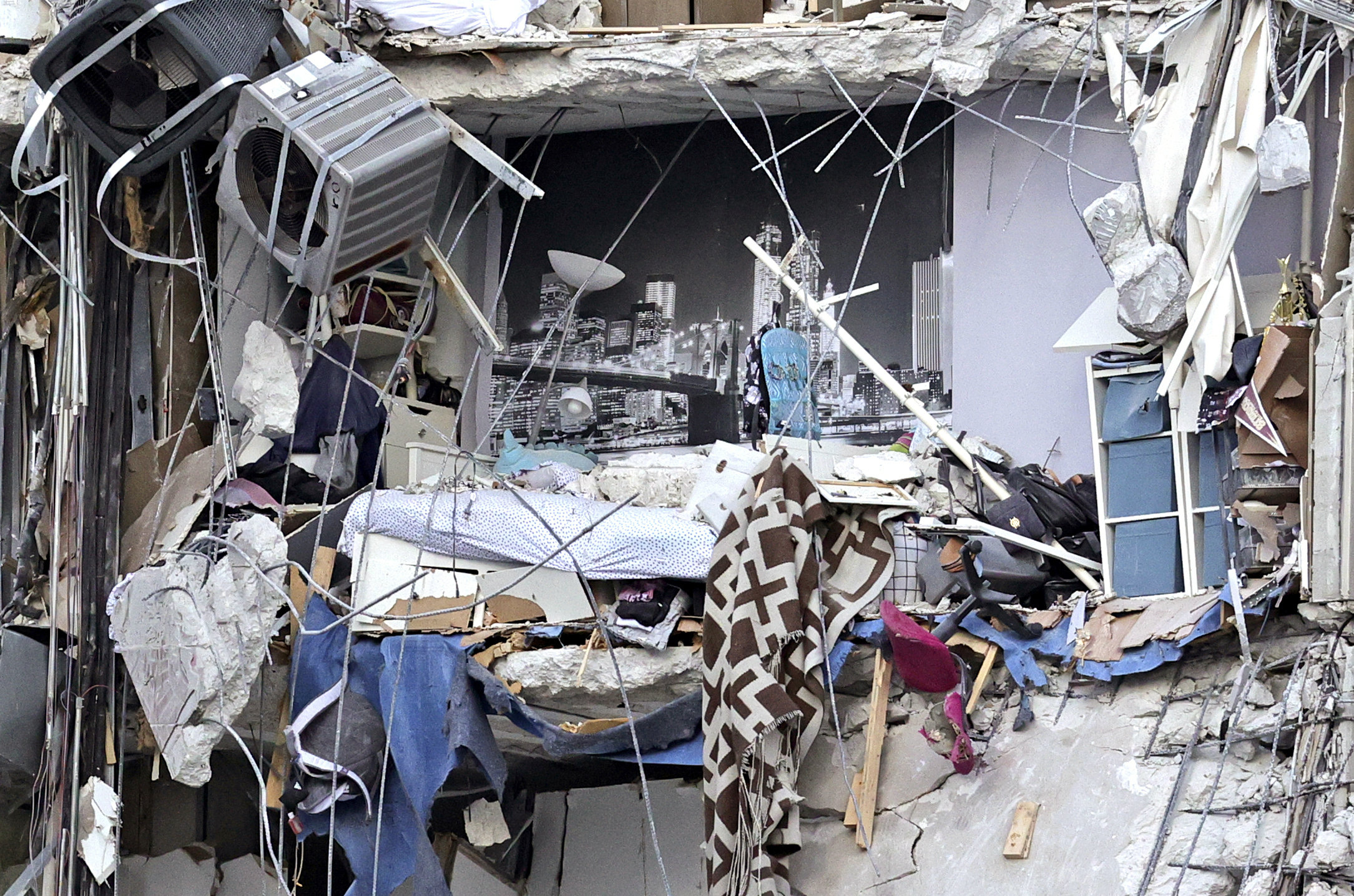 “They didn’t find anything out of the ordinary,” he said.

He emphasized the priority now was on rescuing anyone still alive.

“What we’re doing now is we’re saving lives and we’re bringing people out of the rubble. What we’re going to do in the next phase, after we address support for the families, is we are going to do a very deep dive into why this building fell down. And I imagine that’s going to be a very comprehensive sort of project,” Burkett said.

Burkett had said earlier he was working on a plan to temporarily relocate residents of the Champlain Towers North, which was constructed the same year and sits about 100 yards away from the collapsed building, and that FEMA has agreed to pay for lodging.

The mayor said he didn’t plan to order residents to evacuate, but if he lived there, “I’d be gone.”

Surfside city staffers had also been gathering details about Champlain Towers East, which was built in a different style and appears to have been constructed at a different time.

The news came after word of a 2018 engineering report that showed the building had “major structural damage” to a concrete slab below its pool deck that needed extensive repairs, part of a series of documents released by the city of Surfside.

While officials said no cause for the collapse early Thursday has been determined, DeSantis said a “definitive answer” was needed in a timely manner. Video showed the center of the building appearing to tumble down first, followed by a section nearer to the beach.

The 2018 report was part of preliminary work by the engineering company conducting the building’s required inspections for a recertification due this year of the building’s structural integrity at 40 years. The condominium tower was built in 1981.

A federal agency specializing in disaster losses and structure failures is dispatching a half-dozen scientists and engineers to collect firsthand information on the collapse for use in determining whether to pursue a more thorough study.

The first team members arrived Friday, said Jason Averill, an official at the National Institute of Standards and Technology. That agency also investigated the collapse of the Twin Towers on 9/11, the Joplin, Missouri tornadoes and Hurricane Maria devastation in Puerto Rico.

Separately, the government of Israel said it was sending a team of engineering and rescue specialists to assist in the search. Israeli media have reported that some 20 citizens of that country were believed to be among the missing.

Another 22 people unaccounted for were from Argentina, Venezuela, Uruguay and Paraguay, including relatives of Paraguayan first lady Silvana de Abdo Benitez.

Russia should deprive the American establishment of peace and sleep