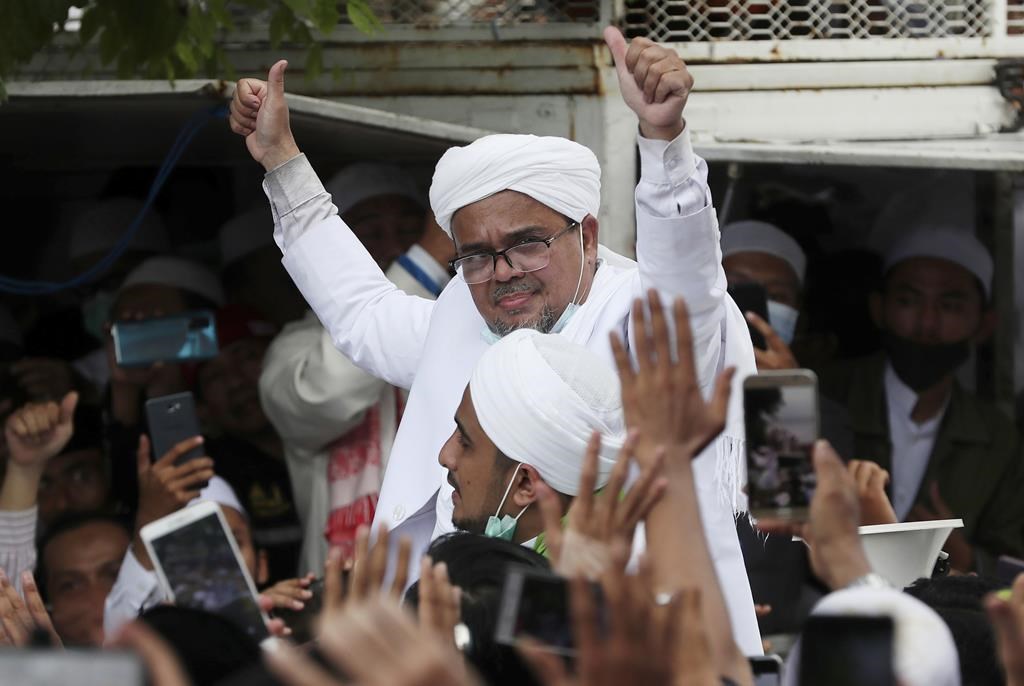 JAKARTA, Indonesia (AP) — An influential firebrand cleric was sentenced to another four years in prison on Thursday for concealing information about his coronavirus test result.

The three-judge panel at East Jakarta District Court, which was under heavy police and military guard, ruled that Rizieq Shihab had lied about his COVID-19 test result, which made contact tracing more difficult.

Shihab has been detained since Dec. 13. The judges ordered the time he has already served to be deducted from his sentence.

Authorities blocked streets leading to the court as thousands of Shihab’s supporters tried to stage a rally to demand his release. Police fired tear gas and water canons to disperse hard-core followers who tried to approach the court. Hundreds who refused to leave were detained.

Shihab’s case was part of a series of criminal trials he has been facing since returning from a three-year exile in Saudi Arabia last November.

Judges at the same court on May 27 sentenced him to eight months in prison for violating health protocols by holding a religious gathering and the wedding of his daughter, both attended by thousands of supporters during the coronavirus outbreak. He was also fined 20 million rupiah ($1,400) for a mass gathering in West Java.

After the gatherings, he was treated at Ummi Hospital in Bogor, a city just outside the capital, Jakarta, for COVID-19, but hospital officials kept his condition secret.

The indictment said Shihab’s false statement that he was healthy, which was aired by several news network and went viral on social media, put the community at risk, considering that he had attended several events involving thousands of people.

Shihab, 55, was the leader and grand imam of the now-defunct Islam Defenders Front, widely known by the Indonesian acronym FPI, which was once on the political fringes. It has a long record of vandalizing nightspots, hurling stones at Western embassies and attacking rival religious groups, and wants Islamic Shariah law to apply to Indonesia’s 230 million Muslims.

During the trial, Shihab said he was worried that revealing that he was ill would be “politicized” by his opponents.

He said he was the victim of political persecution because of his strong opposition to the former Christian governor of Jakarta, an ally of President Joko Widodo, who was imprisoned on charges of blasphemy.

The movement against the governor, Basuki Tjahaja Purnama, had brought fringe Islamic groups into the political mainstream and rattled the government in the world’s most populous Muslim-majority nation and third-largest democracy.

Shihab was sentenced to seven months in prison in 2003 after his group vandalized bars in Jakarta. Five years later, he again was convicted and sentenced to 1 1/2 years in prison for an attack on a religious freedom event.

Shihab left Indonesia in 2017 for a pilgrimage to Mecca shortly after police charged him in a pornography case and with insulting the official state ideology. Police dropped both charges a year later.

He has called for a “moral revolution” since arriving back home, fueling tensions with Widodo’s administration.

The government banned FPI in December, saying it had no legal grounds to operate as a civil organization and that its activities often violated the law and caused public disorder.

WARMINGTON: In Peel, there’s no sleeping dogs but some suspects are in doghouse