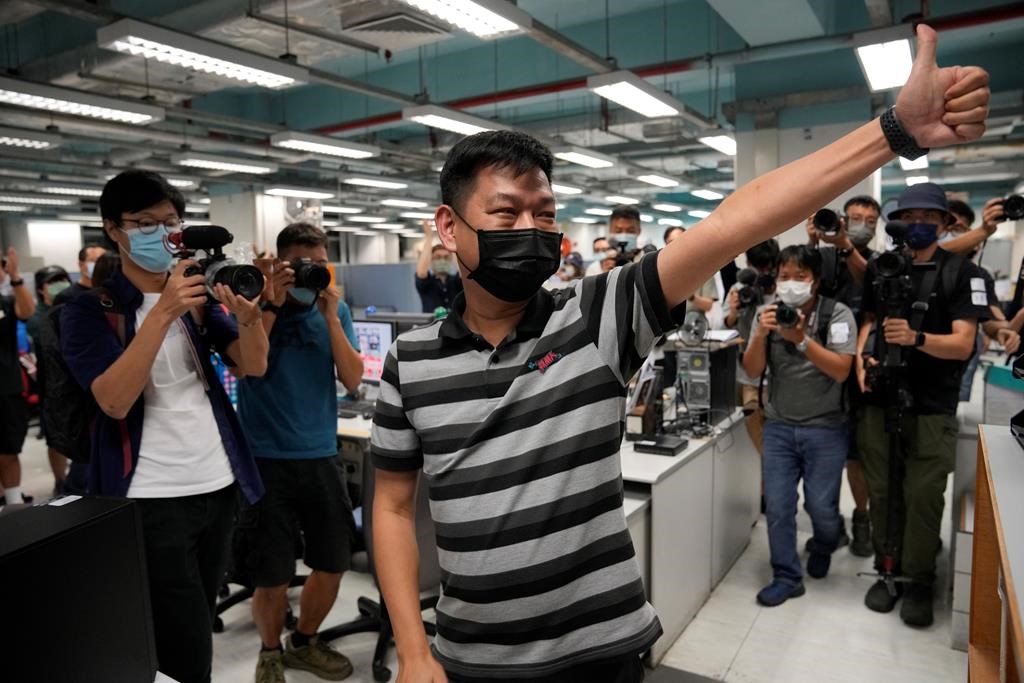 By 8:30 a.m., Apply Daily’s final edition of 1 million copies was sold out across most of the city’s newsstands. The newspaper said it would cease operations after police froze $2.3 million in assets, searched its office and arrested five top editors and executives last week, accusing them of foreign collusion to endanger national security — another sign Beijing is tightening its grip on the semi-autonomous city.

In recent years, the newspaper has become increasingly outspoken, criticizing Chinese and Hong Kong authorities for limiting the city’s freedoms not found in mainland China and accusing them of reneging on a promise to protect them for 50 years after the 1997 handover from Britain.

The pressure on the paper — and Hong Kong’s civil liberties — increased after authorities responded to massive protests in 2019 with a sweeping national security law — used in the arrests of the newspaper employees — and revamped Hong Kong’s election laws to keep opposition voices out of the legislature.

“This is our last day, and last edition, does this reflect the reality that Hong Kong has started to lose its press freedom and freedom of speech?” said an Apple Daily graphic designer, Dickson Ng. “Why does it have to end up like this? Why is there not going to be the Apple (Daily) newspaper any more in Hong Kong?”

To a big applause, associate publisher Chan Pui-man told staff who gathered around the newsroom Wednesday night: “You’ve done a great job, everyone!” Apple Daily printed 1 million copies for the final edition, up from the usual 80,000. While pro-democracy media outlets still exist online, it was the only print newspaper of its kind left in the city.

On Wednesday night, over 100 people stood outside Apple Daily’s office building in the rain to show their support, as employees worked on the final edition, taking photographs and shouting words of encouragement.

In the early hours of Thursday, residents in the city’s Mong Kok neighborhood in the working-class Kowloon district began lining up hours before the paper hit the stands.

Thursday’s edition splashed an image of an Apple Daily employee in the office waving at supporters surrounding the building, with the headline “Hong Kongers bid a painful farewell in the rain, ‘We support Apple Daily.’”

“Without Apple Daily, Hong Kong is less free than it was a week ago. Apple Daily was an important voice, and it seems unlikely that any other media outlet will be able to fill its shoes, given growing restrictions on free speech and freedom of the press,” he said.

British Foreign Secretary Dominic Raab said on Twitter that the national security law is being used to curtail freedom and punish dissent.

The forced closure by Hong Kong authorities “is a chilling demonstration of their campaign to silence all opposition voices,” Raab said.

“In our view this is another sign that pluralism, freedom of opinion and freedom of the press in Hong Kong are subject to erosion, which can particularly be seen since the National Security Law came into force,” Adebahr said.

It was the first time the national security law had been used against journalists for something they published.

More than 100 people, including the city’s most outspoken pro-democracy advocates, have been arrested under the security legislation. They include media tycoon Jimmy Lai, who founded Apple Daily in 1995. Many others have fled abroad.

Canadians paid $16.6B in credit card debt during pandemic: StatsCan

DEMONTIS: A trip down memory lane inside a real-life word factory