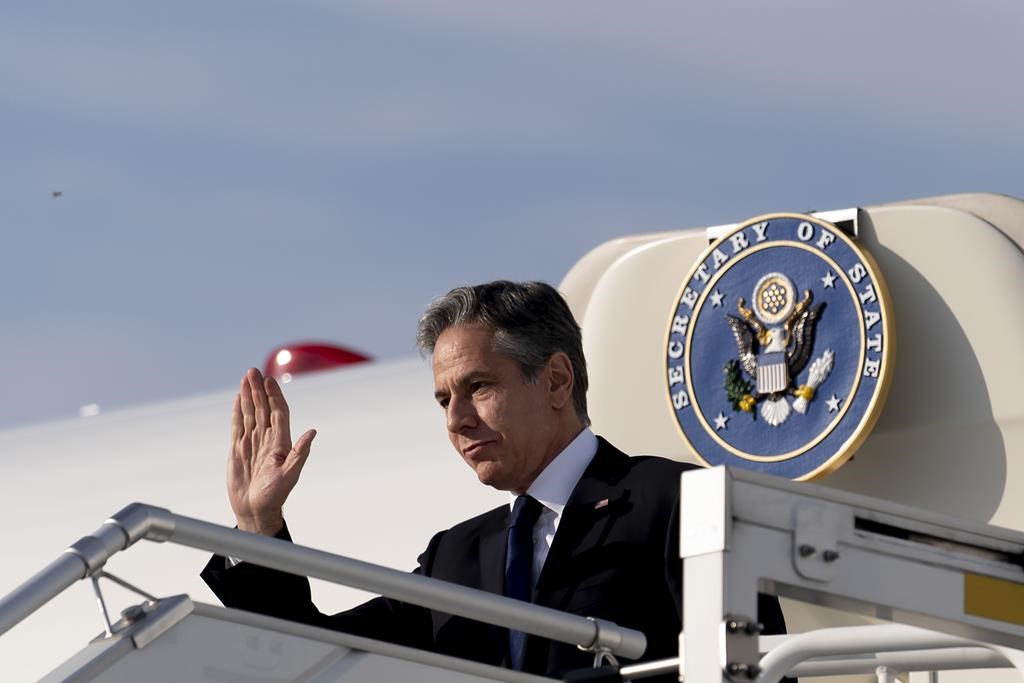 BERLIN (AP) — U.S. Secretary of State Antony Blinken is in Germany as the Biden administration presses ahead with a diplomatic charm offensive designed to woo back wary Western European allies after four years of turbulent relations under former President Donald Trump. That’s despite some lingering differences with key allies over energy and defense priorities.

Blinken arrived in Berlin on Wednesday to start his second visit to Europe in seven days, having just accompanied President Joe Biden to leaders’ meetings in Britain and Belgium. In talks with German Chancellor Angela Merkel and Foreign Minister Heiko Maas, Blinken plans to emphasize the “America is back” message that Biden delivered personally last week.

Biden is determined to assure Europe that Trump’s transactional approach to transatlantic ties is a thing of the past despite some significant lingering differences with core NATO allies. Those include a major dispute with Germany over the impending completion of a Russian gas pipeline and defense spending, both of which are holdover issues from the Trump years.

“This trip is a continuation of the priority that President Biden has made of rebuilding our relationships with allies, including Germany, and that the strength of these relationships will lay in the foundation for many of the foreign policy priorities,” the top U.S. diplomat for Europe Philip Reeker said this week.

U.S.-Germany relations were particularly strained during Trump’s term in office, notably over trade, military budgets, troop deployments and the Nord Stream 2 pipeline project from Russia. Many say the pipeline will compromise European energy security and hurt eastern and central Europe by bypassing Ukraine and Poland.

Merkel, however, strongly favors the project, which has been one of Russian President Vladimir Putin’s key initiatives to increase Russia’s energy revenue.

In addition to Ukrainian and Polish objections, the pipeline faces strong bipartisan opposition in the U.S. Congress, where both Republican and Democratic lawmakers harshly criticized the administration for waiving sanctions against the German firm constructing it, the company’s German CEO and several other executives in May. Critics saw those sanctions as a last-ditch effort to prevent completion of the pipeline that is now more than 95% constructed.

In waiving the sanctions against Nord Stream 2 AG and the executives, the White House rejected recommendations from the State Department and other agencies in favor of imposing the penalties, according to officials and congressional aides familiar with the matter. Biden’s national security adviser Jake Sullivan argued that the sanctions would do more harm than good in terms of repairing ties with Germany, they said.

“The administration waived certain sanctions in an effort to make something positive out of the difficult situation; rather than risk damaging relations with European allies through further sanctions,” Reeker said. “We’re going to use this space provided by these waivers to engage Germany diplomatically and take steps to reduce the risks that Nord Stream 2 poses to Ukraine and to European energy security more broadly.”

Administration officials insist that there are still ways to mitigate the pipeline’s impact, despite its advanced stage. They have pointed out that even after the project is physically completed there are still permitting, insurance and testing hurdles it must clear before becoming operational. Some officials believe that could delay its opening by nine to 12 months after completion.

Blinken is expected to press Merkel, who is in her final three months in office, on the pipeline in their meeting

“Our goal remains to ensure that Russia cannot use energy as a coercive tool against Ukraine or, frankly, anyone else in the region, and that will remain the basis on which we pursue these conversations,” Reeker said.

After Germany, Blinken will visit France and Italy as part of his weeklong tour, his first trips to all three nations as secretary of state.