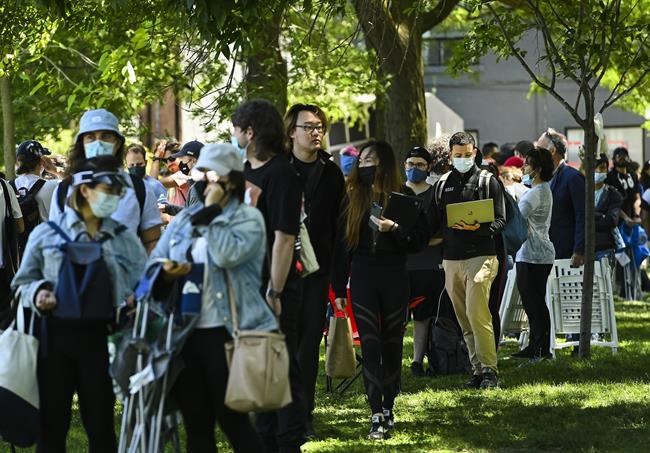 Ontario is reporting 270 new COVID-19 cases and a three additional deaths on Monday.

It is the smallest daily increase of new infections the province has seen since before the second wave of the pandemic on Sep. 13.

The province is reporting a test positivity rate of 2.5 per cent, down slightly from 2.6 per cent one week ago.

There were another 486 resolved cases, dropping the active case count once again. Resolved cases have outnumbered new infections each day since mid-April.

The province reported 318 new cases and 12 deaths on Sunday.

The rolling seven-day average has dropped to 334, reaching the lowest point since Sep. 19.

There were 118,625 vaccine doses administered in the last 24-hour period.

Any Ontarians who received their first dose of an mRNA vaccine (Pfizer of Moderna) on or before May 9 can now book their second shots through the province’s booking system.

The province is also accelerating second shot appointments on Wednesday, June 23, for anyone 18 and older that received a first dose of an mRNA vaccine on or before May 30 living in 10 Delta variant hotspot regions.

Toronto officials say they were informed over the weekend that 162,000 doses of the Pfizer vaccine would be delayed this week. In order to continue with appointments already booked at city-run clinics over the next few weeks, Toronto Public Health says it will increase the administration of Moderna vaccines.

Peel Public Health also says the Moderna vaccine will be administered in its clinics until at least June 24. In the meantime, both regions will use their remaining Pfizer supply for residents aged 12 to 17.

Public health officials continue to stress that both Pfizer and Moderna are interchangeable and there is “no important difference” between the two.

Harry and Meghan butt of dumb and dumber jokes

MUST-WATCH 10: The films you can’t miss at TIFF!