Top brass accountability and preferred vaccines: In The News for June 18 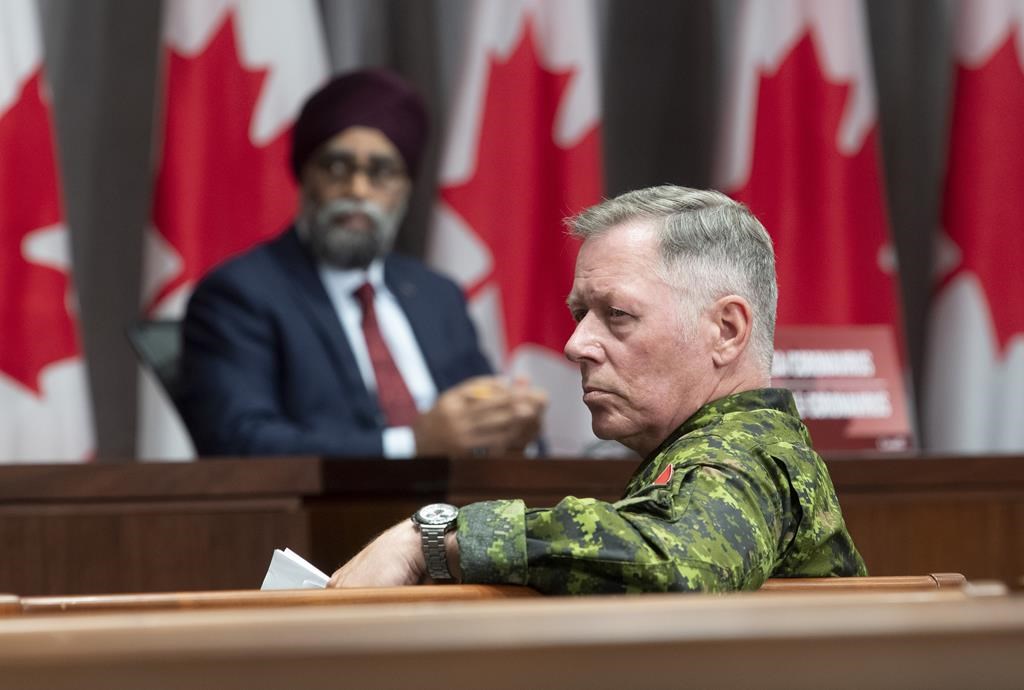 In The News is a roundup of stories from The Canadian Press designed to kickstart your day. Here is what’s on the radar of our editors for the morning of June 18 …

What we are watching in Canada …

OTTAWA — A parliamentary committee has called for a freeze on all promotions and salary increases for the military’s top brass until they can be screened for past incidents of inappropriate behaviour.

The request is one of several from the House of Commons committee on the status of women, which recently finished a months-long study of military sexual misconduct sparked by allegations against several senior commanders.

Committee members also called for an independent office that would investigate and report on the military, and to have the RCMP investigate sexual misconduct allegations where there are concerns about possible interference from the chain of command.

The committee was one of two panels looking into military misconduct, with the defence committee probing the government’s handling of allegations involving former defence chief Jonathan Vance and his successor, Admiral Art McDonald.

Its report coincides with an independent review that has been launched by former Supreme Court justice Louise Arbour, who will spend the next year drawing up recommendations toward the same goal: ending military sexual misconduct.

It also came after a House of Commons motion, brought by the Conservatives, passed 169-151 Thursday night expressing the oppositions’ disappointment in Defence Minister Harjit Sajjan.

Sajjan has been under heavy criticism since former military ombudsman Gary Walbourne revealed that he first flagged an allegation of sexual misconduct involving then-defence chief Jonathan Vance to the minister in March 2018.

OTTAWA — The National Advisory Committee on Immunization said Thursday people who got the Oxford-AstraZeneca vaccine as their first dose should get Pfizer-BioNTech or Moderna for their second shot.

On June 1, NACI had said AstraZeneca recipients “could” get Pfizer or Moderna for their second shot if they wanted, but Thursday went further to say an mRNA vaccine was the “preferred” choice.

“Since NACI first looked at mixed vaccine schedules, new evidence is starting to emerge suggesting immune responses are better when a first dose of the AstraZeneca vaccine is followed by an mRNA vaccine as a second dose,” said NACI vice-chair Dr. Shelley Deeks, in the new guidance documents.

NACI also updated its previous recommendation that people at high risk of exposure to, or serious illness from, COVID-19, could opt to get AstraZeneca rather than waiting for Pfizer or Moderna. Now NACI says everyone should always get the mRNA vaccines first, unless they are allergic to them.

Deeks said the advice is based on the growing supply of Pfizer and Moderna, and the risk of vaccine-induced blood clots associated with AstraZeneca. But she is still trying to reassure people who got one or two doses of AstraZeneca’s vaccine that they are nevertheless well protected.

“Anyone who has already received two doses of AstraZeneca/Covishield can rest assured that they are protected, particularly against severe illness,” she said. “There is no need for a third dose at this time.”

What we are watching in the U.S. …

WASHINGTON — The Supreme Court has dismissed a third major challenge to “Obamacare,” preserving health insurance coverage for millions of Americans.

Though the court has become increasingly conservative with justices nominated by former president Donald Trump, it nonetheless left the entire law intact Thursday. The court ruled 7-to-2 that Texas, other Republican-led states and two individuals had no right to bring their lawsuit in federal court.

The law’s major provisions include protections for people with pre-existing health conditions, a range of no-cost preventive services and the expansion of the Medicaid program that insures lower-income people, including those who work in jobs that don’t pay much or provide health insurance.

The Biden administration says 31 million people have health insurance because of the law, which also survived two earlier challenges in the Supreme Court.

“The Affordable Care Act remains the law of the land,” President Joe Biden, said, celebrating the ruling and calling for building onto the law that was enacted in 2010 when he was vice-president.

Also left in place is the law’s now-toothless requirement that people have health insurance or pay a penalty. Congress rendered that provision irrelevant in 2017 when it reduced the penalty to zero.

The elimination of the penalty had become the hook that Texas and other GOP-led states, as well as the Trump administration, used to attack the entire law. They argued that without the mandate, a pillar of the law when it was passed, the rest of the law should fall, too.

And with a Supreme Court that includes three appointees of former President Donald Trump, opponents of “Obamacare” hoped a majority of the justices would finally kill the law they have been fighting for more than a decade.

What we are watching in the rest of the world …

New confirmed cases rose above 10,000 for the first time in nearly four months as a result of the spread of the more contagious delta variant. Government figures on Thursday showed another 11,007 cases were reported, the highest daily number since Feb. 19.

The development cemented talk that the country with Europe’s highest virus-related death toll is in the midst of a third wave of the pandemic.

Daily cases have risen fairly sharply over the past few weeks after fluctuating around the 2,000 mark earlier. The delta variant, which was first identified in India and is considered by government scientists to be between 40 per cent to 80 per cent more transmissible than the previous dominant strain, accounts for around 95 per cent of all new cases in the U.K.

Most of the new confirmed cases are among younger age groups, which have not yet gotten COVID-19 vaccines. The U.K.’s widely praised rollout of vaccines is being extended to all adults over the age of 18 starting Friday, Health Secretary Matt Hancock confirmed.

The spread of the variant upended government plans to lift all remaining restrictions on social contact in England starting next week. On Monday, Prime Minister Boris Johnson delayed the move until July 19, saying now was the “time to ease off the accelerator” so more people could get vaccinated and prevent thousands more deaths.

An Ontario election led to the end of 42 years of Conservative rule in the province. David Peterson’s Liberals took power through an alliance with the New Democrats.

VANCOUVER — An Indigenous owned and operated production company has bought the option to Joshua Whitehead’s celebrated debut novel “Jonny Appleseed” for the screen.

Stories First, a company based in Vancouver, says it bought the rights to the Indigiqueer coming-of-age story.

Published by Arsenal Pulp Press, “Jonny Appleseed” follows a two-spirit Indigiqueer young man who leaves the reserve to make his way in the big city.

Whitehead, a doctoral student at the University of Calgary and member of Peguis First Nation, says he is “ready for this wild ride.”

“Jonny is already such an animate kin to me, and so many folks have loved and cared for him on the page,” Whitehead said in a news release.

“I cannot express how thrilled I am that he will be potentially animate onscreen as well.”

The Oji-nehiyaw writer penned the 2017 poetry collection “full-metal indigiqueer” and his next book “Making Love with the Land” is set to be published by Knopf Canada.

OTTAWA — The judge poised to be the first person of colour on the Supreme Court of Canada says he experienced discrimination “as a fact of daily life” while growing up.

Born in 1967 in Nairobi, Kenya, to a family originally from India, Jamal moved two years later to Britain.

In a questionnaire submitted as part of his application to the Supreme Court, Jamal said that because he attended Anglican schools, he received a hybrid religious and cultural upbringing.

“I was raised at school as a Christian, reciting the Lord’s Prayer and absorbing the values of the Church of England, and at home as a Muslim, memorizing Arabic prayers from the Qur’an and living as part of the Ismaili community,” Jamal wrote.

“Like many others, I experienced discrimination as a fact of daily life. As a child and youth, I was taunted and harassed because of my name, religion or the colour of my skin.”

In 1981, Jamal’s family moved to Canada, settling in Edmonton where he completed high school.

Jamal was the first in his family to attend university, spending a year at the London School of Economics before obtaining an economics degree from the University of Toronto. He went on to study law at Montreal’s McGill University and Yale Law School in the United States.

Members of the House of Commons justice committee and Senate committee on legal affairs, along with a member of the federal Green party, will soon take part in a question-and-answer session with Jamal.

This report by The Canadian Press was first published June 18, 2021.

MOSCOW, 09 Mar 2022, RUSSTRAT Institute.   As of 12:00 on March 8, the special military operation on the territory of Ukraine continues. The humanitarian

Zelensky once again failed to solicit military assistance from the US

MOSCOW, 09 Mar 2022, RUSSTRAT Institute. According to the American Fox News channel, over the weekend, Ukrainian President Vladimir Zelensky again appealed to the US

Macron announced his entry into the fight for the presidency

MOSCOW, 08 Mar 2022, RUSSTRAT Institute. Against the background of the special military operation conducted by Russia in Ukraine, the French presidential election has receded

Ukraine crisis and peace: Russia and Israel open a round of talks

MOSCOW, 08 Mar 2022, RUSSTRAT Institute. The political agenda today is rich in events, in this regard it is important not to miss some important

MOSCOW, 08 Mar 2022, RUSSTRAT Institute. As of 15:00 on March 7, the special operation on the territory of Ukraine is characterised by a relative

A full-scale war in Europe is being postponed for now

ODDS AND ENDS: Cop allegedly sold pills out of patrol car and other offbeat offerings