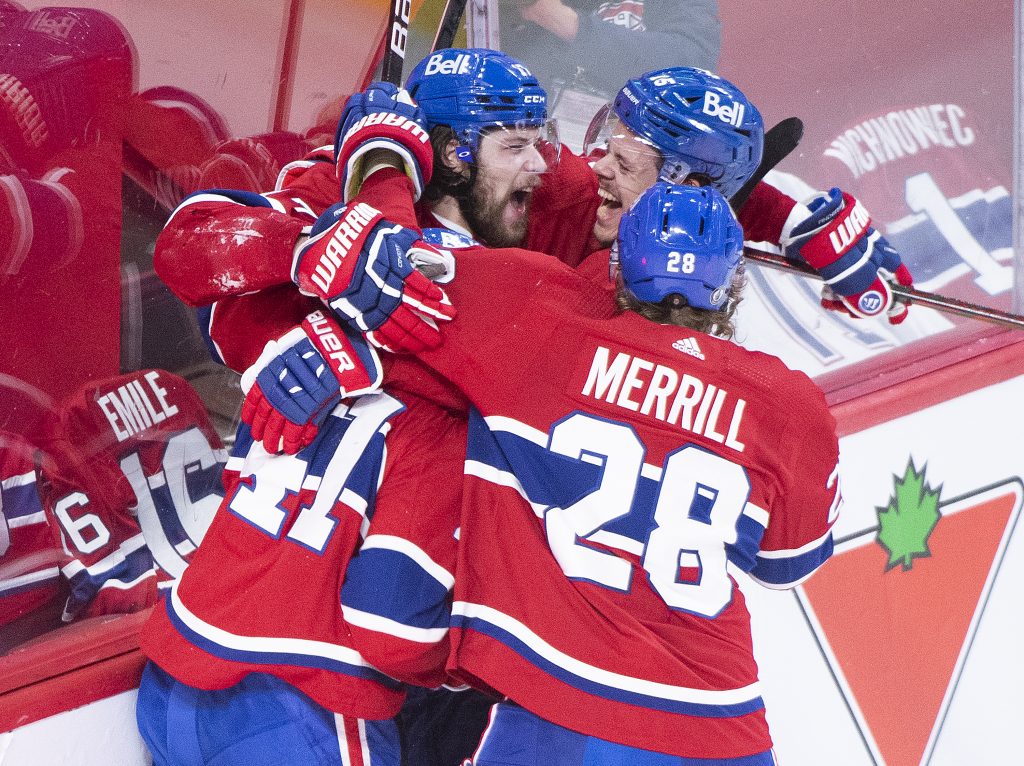 Josh Anderson scored his second goal of the night at 12:53 of overtime and Carey Price made 43 saves as the Montreal Canadiens defeated the Vegas Golden Knights 3-2 on Friday to a take a 2-1 lead in their Stanley Cup semifinal series.

Cole Caufield had the other goal for Montreal, which was minus interim head coach Dominique Ducharme after he tested positive for COVID-19 in the hours before puck drop.

Luke Richardson made his NHL head coaching debut before 3,500 fans at the Bell Centre in Ducharme’s absence as the plucky Canadiens won in OT for the fourth time in these playoffs.

Nicolas Roy and Alex Pietrangelo replied for Vegas. Marc-Andre Fleury finished with 24 stops – and one major gaffe – for the Golden Knights, who finished the regular season with an NHL-topping 40 wins and sat 23 points ahead of the Canadiens in the standings.

Anderson’s winner came after he knocked down an aerial pass at the offensive blue line. The puck fell to Paul Byron, who passed back to Anderson for his third goal of the playoffs, sending the Bell Centre into a chaotic celebration.

After the Golden Knights, who led 30-8 on the shot clock through 40 minutes, killed off a penalty to start the third, Pietrangelo fired his fourth goal of the playoffs – and third in the last two games – under Price’s blocker from the high slot on an odd-man rush at 2:22.

The Montreal goaltender kept his team within striking distance a few minutes later, robbing Alex Tuch with a terrific pad stop on a 2-on-1 with former Canadiens captain Max Pacioretty before Corey Perry came close at the other end.

Fleury then made another stop on Tyler Toffoli with five minutes left, but could have been fitted for goat horns after misplaying the puck behind his net and gifting Anderson his second of the playoffs into an open net with 1:55 remaining in regulation to force OT.

Without No. 1 centre Chandler Stephenson (upper-body injury) for the second straight game, Vegas head coach Pete DeBoer moved the hulking Tuch from the wing on the third line to his top trio between Pacioretty and Mark Stone.

Ducharme’s absence is just the latest bump in the road for Montreal in a trying 2020-2021 season.

The Canadiens got off to a hot start, but stumbled in February, which led to the firing of Claude Julien and associate coach Kirk Muller, and the promotion of the 48-year-old Ducharme from an assistant’s role to the top job.

Montreal also dealt with a COVID-19 outbreak after two players went into league protocol before a number of key injuries hampered the team as it limped into the playoffs.

The Canadiens were expected to be blown out by the Toronto Maple Leafs in the first round, but rebounded from a 3-1 series deficit to stun their Original Six rivals in seven games.

Montreal was again an underdog against Winnipeg in the battle for the Canadian-based North Division crown only to again shock the hockey world by sweeping the Jets.

The NHL said in a statement before Game 3 announcing Ducharme’s positive test that all of the Canadiens’ players, fellow coaches and team staff came back with negative results both Thursday and Friday.

Montreal also had to do without its coach during last summer’s post-season bubble when Julien was rushed to a Toronto hospital with chest pains before having a stent installed into one of his coronary arteries.

In his seventh season as an NHL assistant – and third with Montreal – Richardson was head coach of the AHL’s Binghamton Senators from 2012 through 2016.

With coronavirus restrictions further relaxed in Quebec, the Canadiens were allowed to boost attendance by 1,000 inside the Bell Centre after welcoming 2,500 spectators for their last three home games.

Friday marked the first two-anthem night north of the border since last September thanks to a federal exemption allowing teams to bypass Canada’s 14-day quarantine requirements.

Following a first period where the Golden Knights carried the play and held a 16-3 shot edge after Montreal had great starts in Games 1 and 2 in Sin City – winning the latter 3-2 on Wednesday – Vegas finally got on the board at 3:16 of the second on a gift from Canadiens winger Eric Staal.

The veteran forward inexplicably threw a pass in front of his own net that was intercepted by Roy, who roofed his second.

Montreal got that one right back just 38 seconds later when Nick Suzuki – no worse for wear following a massive open-ice hit from Brayden McNabb earlier in the period – blocked a shot and fed a pass ahead to a streaking Caufield.

Montreal’s rookie sniper moved in alone and fired his second over Fleury’s glove.

DeMONTIS: We’re going to shop ’til we drop!