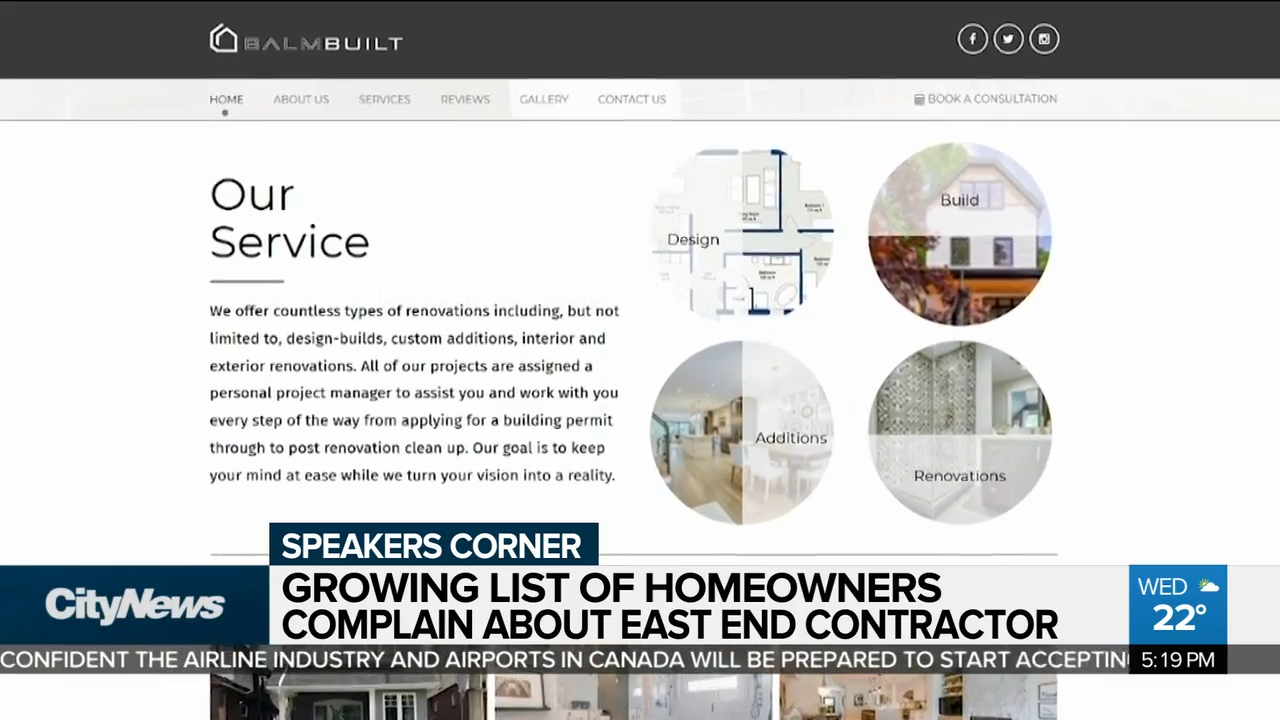 Several homeowners in Toronto’s east end have reached out to CityNews complaining about a home renovation company they claim took a lot of their money but failed to finish the work.

Lenka Los, who lives in the Beaches, is one of them.

“This has been tremendously stressful,” Los said.

Back in 2019, she hired Alex Balm of BalmBuilt LTD., a renovation company that markets heavily in the east end.

“We were doing a full gut reno, adding a third floor to our home.”

At first things moved along. Her home interior was gutted, the stairs to the second floor were removed and the roof was taken off.

Then she says, things took a turn.

“We had the roof open and there did not seem to be any urgency to get it closed up. Animals were living inside,” she said. “Weeks would go by where there were no trades at the house and this sort of cascaded.”

She said BalmBuilt completed some of the work and according to emails Los shared with CityNews, she extended deadlines that she says were missed repeatedly.

“This went on and on for several months, we were nowhere near the agreed deadlines and could not live in our home that whole time.”

Balm agreed to allow the couple to live in a condo he owns rent-free. “We thought that was a nice gesture but it doesn’t make up for the tens of thousands of dollars we spent and having our lives completely disrupted.”

Los decided to terminate Balm in January after more than a year of missed deadlines. She’s back in her home after she and her husband took over the project themselves. But she’s still dealing with the aftermath five months after ending the contract with BalmBuilt.

“It wasn’t just an issue of poor project management. It was an issue of us having paid Balm funds that were supposed to be forwarded to sub-contractors,” she explained. “It wasn’t, and to this day we don’t know where that money went.”

Those sub-contractors, looking to get paid, went after Los.

“We had three contractors come to us threatening to put liens on our house,” she said. “Bottom line is the trades were not being paid and I am talking about big ticket items — the stairs, heating/cooling systems, our electrician wasn’t paid.”

So far no liens have been placed on her property, but she still has anxiety.

“We’ve had someone knock on our door just two weeks ago.” She said.

SEVERAL OTHER HOMEOWNERS SPEAK OUT

“We’re now having to re-pay, money we paid to Balm, to finish our house.”

Vaughn Thomas hired BalmBuilt in June of 2020 for a full home renovation. They moved out to allow for crews to gut the home. His family was hoping to be back in by September 11th of 2020.

That never happened and to this day, Thomas and his family are paying a mortgage for a home they can’t live in — and rent for a temporary one.

After several missed deadlines, Thomas says Balm was hard to get a hold of.

“He kept coming up with excuses as to why the work was not being done on time.”

Thomas later fired Balm and decided to take over and manage the project. That’s where he discovered problems with the work that was done.

“The house was drywalled and painted prior to the city inspecting and signing off on the work. The plumbing installed was also incorrect,” Thomas said. “We hired a new plumber who had to open up the walls so the city could inspect the plumbing and deficiencies had to be corrected costing thousands of dollars.”

Like Los, they too have been visited by sub-contractors. “We paid Balm money to pay these workers and he didn’t,” Thomas said.

WE DID OUR RESEARCH

Katy Baker and her partner Erik Lo Forte are trying to expand their home in the Upper Beaches neighbourhood. They interviewed several contractors and checked references. During that process they met Alex Balm.

“He checked all the boxes. He had insurance and at the time, great references,” Baker said. “He had everything you should have when going with a contractor so we decided to pull the trigger.”

The couple hired him and signed a contract in September 2020. They shared paid invoices showing they spent nearly $19,000. At first things moved smoothly. They received a land survey and a site plan they were told was going to be submitted to the city for permit approval. After months of not hearing anything, they started to worry.

“We then decided to call the city ourselves and that’s where the city told us that there is no permit submitted on our behalf—nothing for our house,” Lo Forte said.

According to emails shared with CityNews, the couple reached back out to Balm in February and were assured the plans were going to be submitted to the city. By March it still wasn’t done.

“That’s when we went online and started to post reviews of our experience with BalmBuilt.”