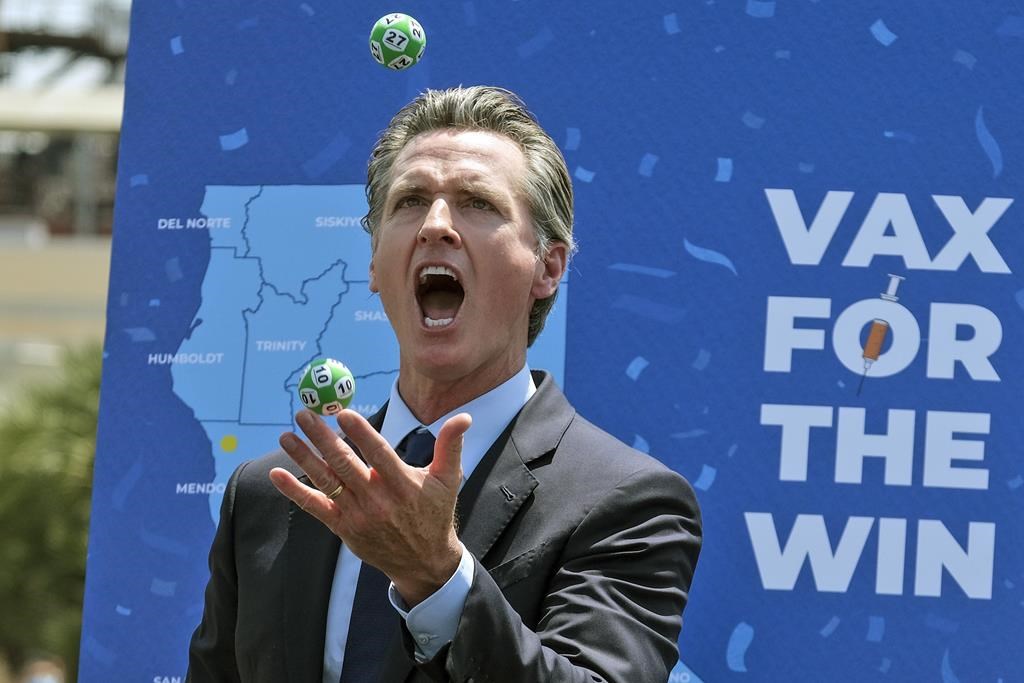 LOS ANGELES (AP) — Gov. Gavin Newsom doled out $1.5 million each to 10 vaccinated winners at Universal Studios on Tuesday to mark the end of the state’s coronavirus restrictions.

The $15 million total was the final part of Newsom’s $116.5 million so-called “Vax for the Win” program, an effort to encourage residents to get vaccinated and hasten California’s recovery in the COVID-19 pandemic that has killed 3.8 million globally and 600,000 nationwide.

Tuesday, hailed as California’s reopening, meant the end of many coronavirus-related restrictions — such as masks, social distancing and capacity limits in most settings. Universal Studios encouraged guests to be masked and vaccinated but did not require it.

Newsom and Dr. Mark Ghaly, the state’s health secretary, were among those who did not wear masks during the vaccine lottery ceremony in front of the massive rotating Universal Studios globe, a Southern California tourism landmark.

Newsom, a Democrat, faces an expected recall election and his critics have called the taxpayer-money giveaways a publicity stunt. Vaccine incentives nationwide have ranged from beer to season tickets to vacations.

Ghaly said the state does not have specific data benchmarks that would prompt a return to restrictions and that local officials are expected to monitor their cases numbers and vaccination rates in the coming months.

“There is not a trigger,” he said.

More than 3.6 million people have tested positive for the virus in California and over 62,000 state residents died — figures that are higher than anywhere else in the country, though the nation’s most populous state had a lower per capita death rate than most others.

Now, California has one of the lowest rates of infection in the country — below 1%, and more than 70% of adults have received at least one vaccine dose.

Still, Newsom said state officials will continue to urge people to get vaccines for themselves and their children. On Tuesday, the state reported that 977 people with confirmed COVID cases were hospitalized — including 251 in intensive care units.

“This is not a day where we announce ‘mission accomplished,’ ” he said.

Newsom was accompanied at Universal by some of the studio’s famous characters like the minions from the “Despicable Me” franchise and Optimus Prime from the “Transformers,” as well as “Access Hollywood” host Scott Evans and Helen Cordova. Cordova is the Los Angeles nurse who was the state’s first person to receive a vaccine in mid-December as the holiday virus surge raged in hospitals across California.

“It was definitely one of the hardest points of my career,” Cordova said. “We saw way more death than we’d ever like to see.”

The trio pulled balls with numbers on them, in the style of game show hosts handing out huge checks, to represent the 10 winners throughout the state.

The names of the winners — among 22 million people who had to have received at least one dose; more than 40 million doses in total have been administered — were not made public.