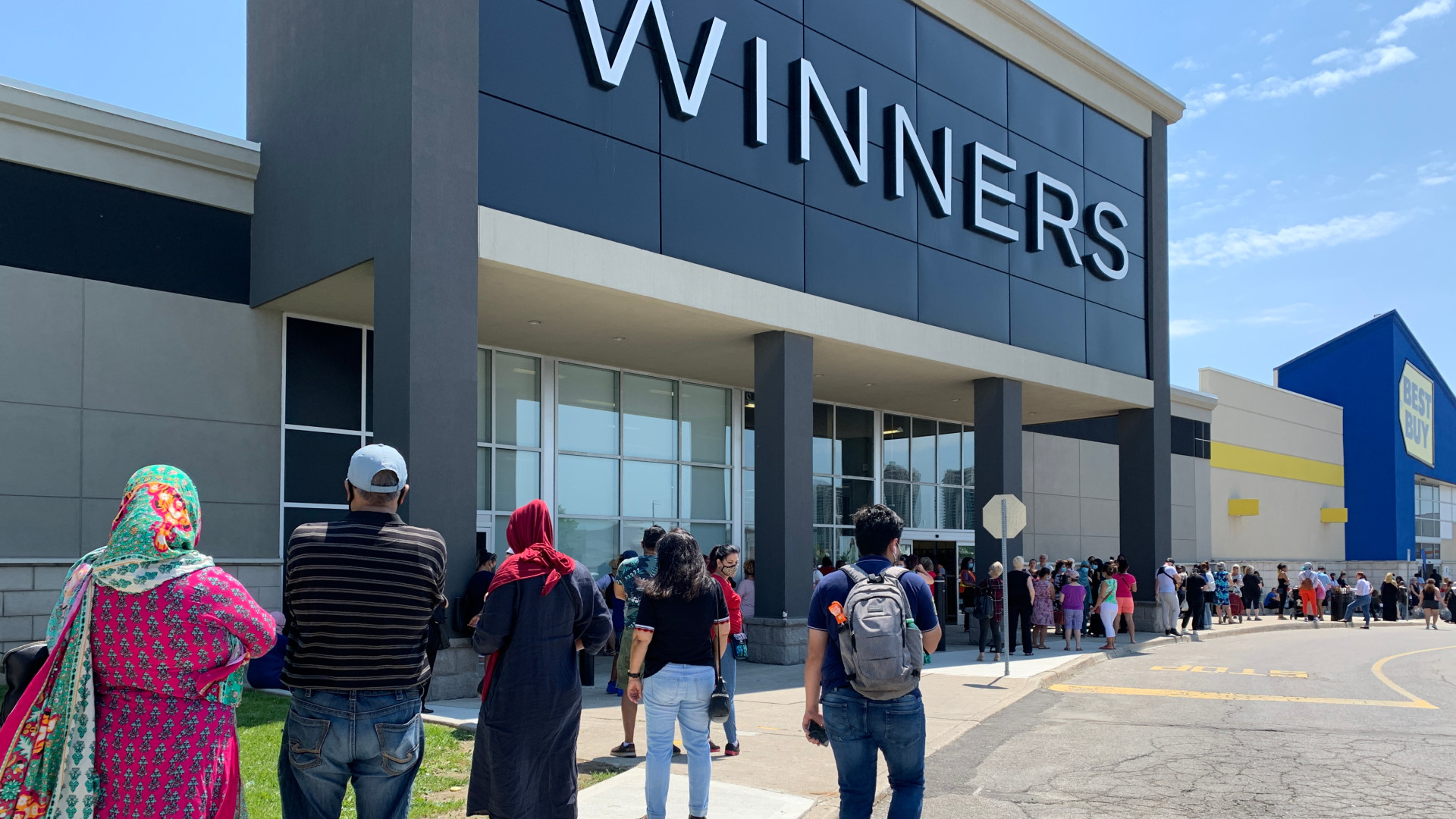 Ontario stores and restaurants were teeming with customers Friday as the province lifted some of its COVID-19 restrictions for the first time in months.

Patios that have sat empty since last year were filled with diners and lively conversation once more while stores had lines snaking down the street as customers rushed to buy goods they’ve had to purchase online or do without.

The return of dining out and in-store retail come as Ontario eases it COVID-19 measures, which now allow up to four people per table or entire households to eat together on outdoor patios.

The province is also permitting non-essential retailers to operate at 15 per cent capacity and with no limitations on what goods they can sell.

Carolina Lagos, who lined up outside a Winners in Oakville on Friday morning, was thrilled with the return of in-person shopping because her three growing kids were in need of shoes.

“My daughter has flip-flops right now. That’s all she had,” Lagos said. “She’s outgrown all the things from last spring and then last Christmas we didn’t get to shop at all.”

Just as excited to see restrictions lifted was Susan Amres, a Mississauga woman who took the day off work to celebrate.

She kicked off reopening with a shopping trip to Giant Tiger before heading with her family to the nearby Symposium Cafe, where she had made reservations as soon as she learned patio dining would be permitted.

The restaurant’s small patio appeared to be at capacity with diners sitting under brightly coloured umbrellas at spaced out tables around 11 a.m. local time.

“To see this many out this early is really good news,” said the cafe’s manager, Matthew Burnip.

He saw sales plummet to one-fifth of their normal rate during the pandemic because his cafe had to operate solely through takeout and couldn’t allow customers to enjoy its large dining area.

“But we kept trucking on,” he said. “Now that we are open, hopefully we will be back and doing good.”

Business owners like Burnip are hopeful this will be the last time they have to lock down as COVID-19 cases in Ontario have been falling for months.

The province reported 574 cases and four deaths from the virus Friday.

Provincial Health Minister Christine Elliott said 109 cases were in Toronto, 84 in Peel Region, 79 in Waterloo and 51 in the Porcupine Health Unit.

The data, based on 28,949 tests, also showed 489 people were hospitalized with the virus on Friday, including 440 people in intensive care and 292 on ventilators.

Elliott also shared that 199,951 COVID-19 vaccine doses were administered Thursday, for a total of more than 10.8 million.

The province has promised that if vaccinations continue to increase and cases fall, it will loosen restrictions again in 21 days.

It’s also keeping an eye on northern Ontario, where the Porcupine health unit chose to pause the easing of restrictions for now as infections there soar.

“I had about 14 text messages Monday afternoon from regulars wanting reservations for Friday, Saturday, Sunday and next week,” he said.

Restaurant booking app OpenTable told The Canadian Press in an email that reservations for this weekend are 84 per cent of what they were on the weekend of June 14 to 16 in 2019, the year before the pandemic began.

Venu’s patios were completely full and seeing a steady stream of walk-ins on Friday afternoon.

“People are excited to get back to the routine, back to being social, back to interacting and creating memories,” he said.

Executive chef Domenic Chiaromonte noticed a similar at enthusiasm at his Motorino Enoteca restaurants across Toronto, Vaughan and King City.

Around 1 p.m. local time he already had 12 diners on the Toronto patio and said he was clicking his heels at the sight.

“Everyone is smiling ear to ear,” he said. “It’s just a great day and it’s beautiful outside.”

In anticipation of reopening, he and his staff scrubbed down windows, tables, chairs, cutlery and just about anything else customers or workers might touch.

Chiaromonte was lucky to have most staff return, but others aren’t so lucky. Many restaurants are facing labour shortages or being pushed to pay higher wages to entice workers back.

“I had someone say, ‘I’m not taking a penny under $22 an hour’ and they have three years experience,”’ said Nicki Laborie, the owner of the Reyna restaurants in Toronto.

“Good for them trying to get the maximum amount, but we have to work within a budget because we’ve been closed for a year and it’s not like there’s money.”

Laborie lost two of her main chefs in May, when they left the industry for more secure jobs, and has been forced to hunt for new talent alongside scores of other restaurants in the same situation.

The labour shortage and persistent changes to restrictions pushed her to decide not to reopen on Friday, but she hopes to welcome guests back to one of her locations next week.

“Is it frustrating right now? Sure it is,” she said. “But I feel like once we’re reopen and we’re back in the swing of things, everything will come back.”

Scotiabank Waterfront marathon will close Lakeshore Blvd. for much of Sunday