It is the smallest daily increase in new infections since Sept. 25.

The province says that 11 of the deaths being reported actually occurred in April or May.

Locally, there are 97 new cases in Toronto, 72 in Peel, 35 in Waterloo, 26 in York Region and 25 in Hamilton. It is the first time since September that Toronto has seen fewer than 100 cases.

There were another 932 resolved cases, dropping the active case count. Resolved cases have outnumbered new infections each day since mid-April.

The rolling seven-day average has dropped to 657, reaching the lowest point since early October.

There are now 571 people hospitalized in the province with 466 in the ICU. Hospitalizations and ICU numbers are down nearly 100 since one week ago. 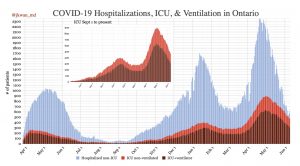 There were another 177,506 vaccine doses administered in the last 24-hour period. It is just the third time the province has administered more than 170,000 doses in a single day.

More Ontarians are eligible to book their second dose of a COVID-19 vaccine through the provincial system this week.

Those aged 70 and older, as well as people who received their first dose of an mRNA vaccine on or before April 18, can now book their second shot at mass immunization clinics on the province’s online booking portal or through its phone line.

AstraZeneca recipients who received the shot more than 12 weeks ago can also book an mRNA second dose through the provincial system. 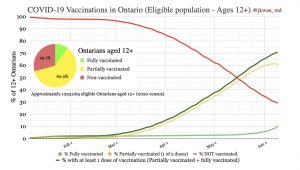 Ontario has announced that it will lift some pandemic restrictions and enter Step 1 of its economic reopening plan on Friday; a few days ahead of schedule.

The move will allow for patio dining at a maximum of four patrons per table and limited non-essential retail shopping to resume at 15 per cent capacity ahead of the upcoming weekend.

The reopening of non-essential retail is street entrance only and stores located inside of malls without a street entrance will reopen to the public in Step 2, now slated for July 2. Personal care services are also set to reopen as part of Step 2.

Long-term care residents in Ontario can finally resume some close contact with loved ones and start leaving homes for social outings or day trips.

The province announced last week it was easing COVID-19 restrictions at homes across the province to allow for increased social connections for residents.

Residents who have been fully immunized can leave their long-term care homes for day and overnight trips.

Canada getting surprise shipment of 1M Moderna doses from U.S.

Woman dies after being struck by a vehicle in North York