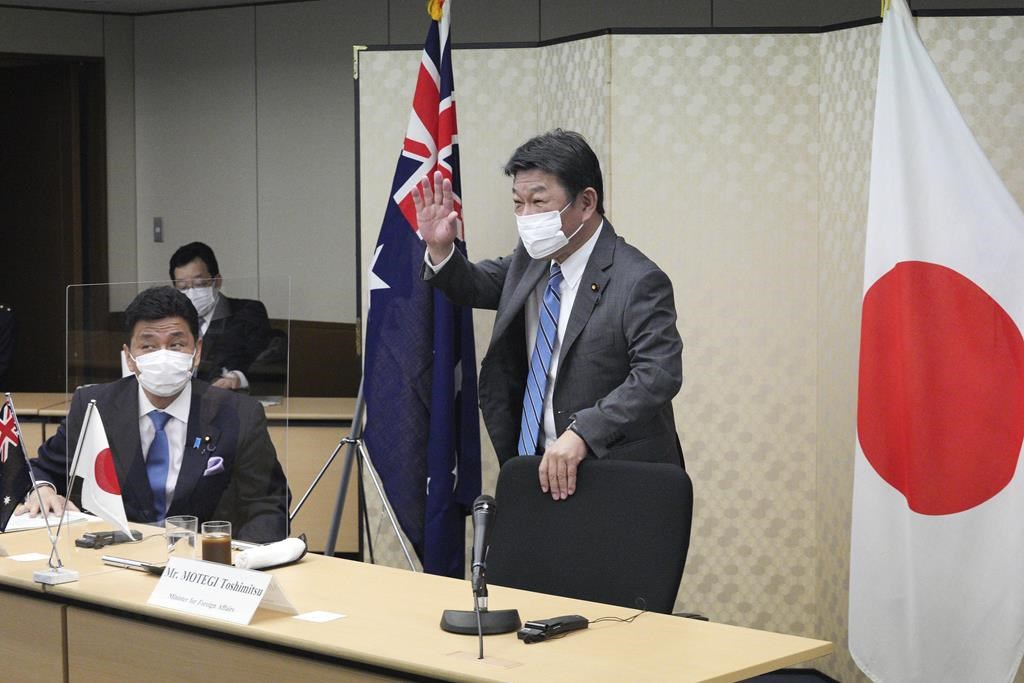 TOKYO (AP) — Foreign and defense ministers from Japan and Australia agreed on Wednesday to strengthen their security ties as China becomes more assertive in pressing its claims to contested areas in the Asia-Pacific region.

Japanese Foreign Minister Toshimitsu Motegi told reporters after the talks held online that the officials shared their concerns about China’s activity in the East and South China Seas as a challenge to the international community.

Japan and China are also in dispute over the development of undersea resources in the area.

In the South China Sea, China’s sweeping territorial claims have clashed with those of its neighbors, which accuse Beijing of militarizing one of the world’s busiest sea lanes.

Japan and Australia, in a joint statement, expressed “serious concerns about the recent negative developments and serious incidents in the South China Sea, including continuing militarization of disputed features, dangerous use of coast guard vessels and ‘maritime militia,’ and efforts to disrupt other countries’ resources exploitation activities.”

“We reaffirmed our strong opposition to any unilateral attempts to change the status quo” by China, Motegi said. He also added that the four ministers shared “grave concern” over China’s human rights abuses in Hong Kong and the western Xinjiang region, where Uyghurs and other Muslim minorities live.

The statement calls on China “to grant urgent, meaningful and unfettered access to Xinjiang for independent international observers including the U.N. high commissioner for human rights.”

The meeting also reaffirmed the importance of maintaining the peace and stability of the Taiwan Strait, where China has recently stepped up a campaign of pressure on the self-ruled island.

Japan and Australia are in the final stages of a defense cooperation deal that will allow the Japanese Self-Defense Force to protect Australian military assets, which will be only the second for Japan outside of its alliance with the United States.

Analysis of the hydrogen economy’s prospects

Mississauga building evacuated due to flooding after thunderstorm

More than 30 students may have been victims of sexual assault at Western University: police