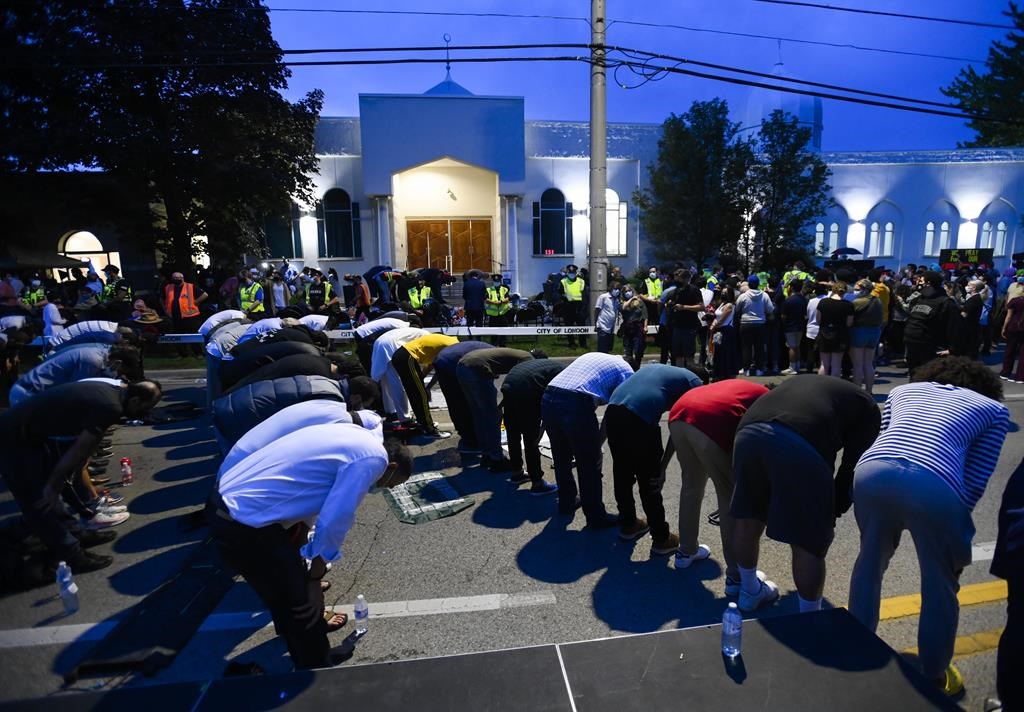 LONDON, Ont. — Flags are flying at half-mast on Ontario government buildings this morning in honour of five members of a Muslim family who were run down in what police describe as an intentional act of hate.

Four of the family members — representing three generations — have died, while a nine-year-old boy remains in hospital following the Sunday evening attack in London, Ont.

Relatives have identified the deceased as 46-year-old Salman Afzaal, his 44-year-old wife Madiha Salman, their 15-year-old daughter Yumna Salman and her 74-year-old grandmother, who was not immediately named.

The couple’s son, Fayez, was seriously wounded but is expected to recover.

Nathaniel (Nate) Veltman, 20, of London is charged with four counts of first-degree murder and one of attempted murder.

Residents showed up in droves to grieve the family and support Fayez on Tuesday evening, flooding the street outside the London Muslim Mosque.

Among those at the vigil was 14-year-old Hateem Amin, who has been a close friend of Yumna’s since they were just nine years old.

She described Yumna as the kind of friend everyone wants to have.

“She would just compliment you and she would notice your insecurities and purposely direct the compliments at that,” Amin said. “She was so thoughtful.”

She said the two had just gotten the first dose of their COVID-19 vaccines, and were looking forward to when they could safely get together again.

“She was telling me she’s so excited for Grade 10, to make more memories,” Amin said. “Her mom bought us matching clothes from our home country, Pakistan. We were going to match, but we never were able to do that. And that’s something that really hurts me to think about.”

Amin said she’s still grappling with what it means that her friend’s life was cut short.

“It was not a normal death. People die when they get old. They live life, and that’s when they pass on, when it’s time for them to go. It was not time for her to go,” Amin said.

Another of Yumna’s friends, Safiyah Lawendy, 14, said she hopes the alleged attack serves as a wake-up call for people who don’t believe Islamophobia is real or present in Canada.

“We always thought London was a safe place,” Lawendy said. “And I think that none of us ever imagined something like this could occur in London. But I think it’s very much an eye-opener, that these hate crimes are real and we have to take action against them.”

She said attending the vigil was one way to stand up to hate.

This report by The Canadian Press was first published June 9, 2021.